In kinship terminology, a cousin is a relative with whom one shares one or more common ancestors. The term is rarely used when referring to a relative in one's immediate family where there is a more specific term (e.g., one's ancestors, descendants, or siblings). The term "blood relative" can be used synonymously and establishes the existence of a genetic link. A system of "degrees" and "removals" is used to describe the relationship between the two cousins and the ancestor they have in common. This system can handle kinships with common ancestors existing any number of generations in the past, though non-genealogical usage often eliminates the degrees and removals and refers to people with common ancestry as simply "cousins" or "distant cousin".

By extension, The term "cousin" can also be used when referring to the genetic relationships between humans and any other form of life, as per the theory of evolution of all life on Earth descending from one common ancestor. However the term in this sense is most commonly restricted to the fields of study surrounding ecological genetics.

Although precise nomenclature exists, in colloquial speech, "cousin" is used unmodified. Thus one's "cousin" may be a first cousin, child of a first cousin, second cousin, cousin's cousin, et cetera. Modifiers like half- or step- are almost never added in everyday speech. It is also used for people one is close to, even if they are not actually a blood relative,

Second cousin also often refers to one's parent's first cousin's child, or someone with whom you share great-grandparents but not grandparents. 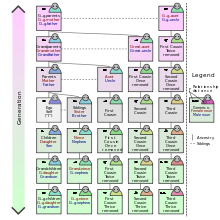 Additional modifying words are used to clarify the exact degree of relatedness between the two people. Ordinal numbers are used to specify the number of generations between individuals and a common ancestor, and further clarification of exact cousinship is made by specifying the difference in generational level between the two cousins, if any, by using degrees of removal. For example, "first cousins once removed" describes two individuals with the common ancestor being the grandparent of one cousin (one "degree") and the great-grandparent of the other cousin (two "degrees"). The degree of lowest number is considered the degree. The cousins themselves are one generation different from each other (one "remove"). So, the difference between the degrees is the "removed" part of the equation in this example.

There is a mathematical way to identify the degree of cousinship shared by two individuals. Each "great" or "grand" in the description of one individual's relationship to the common ancestor has a numerical value of 1. For example, if person one's great-great-great-grandfather is person two's grandfather, then person one's "number" is 4 (great + great + great + grand = 4) and person two's "number" is 1 (grand = 1). The smaller of the two numbers is the degree of cousinship. The two people in this example are first cousins. The difference between the two people's "numbers" is the degree of removal. In this case, the two people are thrice (4 − 1 = 3) removed, making them first cousins thrice removed.

When "identical" twins reproduce with a pair of ordinary siblings, the resulting children are more related than ordinary half-siblings but less related than full siblings (they are genetically equivalent to 3/4 siblings) although they are legally double first cousins.

When identical twins reproduce with another set of identical twins (sometimes called "quaternary marriage"), the resulting children are likewise genetically indistinguishable from full siblings, although they are genealogically double first cousins.

Marriage between double cousins is specifically prohibited in the U.S. State of North Carolina (N.C. Gen. Stat. § 51-3). It is permitted in the other 25 states that permit marriage between first cousins.[1]

Other types of cousins

Half-siblings share only one parent. Half-cousins share just one grandparent (whereas full first cousins share two grandparents with each other). Half-cousins are the children of two half-siblings (and their different partners). For example, if one of John's parents and one of Mary's parents are half-siblings, then John and Mary are half-first cousins. The half-sibling of each of their respective parents would be their half-aunt or half-uncle but these terms, although technically specific, are rarely colloquially.[3] While it would not be unusual to hear of another's half-brother, or half-sister, so described, in common usage one would rarely hear of another's half-cousins or half-aunt, so described, and instead hear them described simply as the other's cousin or aunt. Also, children of half-first cousins are half-second cousins to each other and so on because they would share only one common great-grandparent out of eight instead of two, and so on.

Step-cousins are either stepchildren of an individual's aunt or uncle, children of one's step-aunt or uncle, or half-siblings of one's cousin. No blood relationship exists between step-cousins, although there does not need to be a blood relationship between cousins, as in the case of one or both of the siblings being adopted. Step first cousins once removed would be the stepchildren of one's first cousins. A stepchild of one's first cousin would be a step second cousin to their children (they would share a great-grand parent/step great-grand parent).

Cousin from mother/father side

The brother of the father or the mother's sister's husband is called Periyappa (Tamil: பெரியப்பா) if elder meaning "big-Father" and Chitappa (Tamil: சித்தப்பா) if younger meaning "small-Father". Similarly, the sister of the mother or the father's brother's wife is called Periyamma (Tamil: பெரியம்மா) if elder meaning "big-Mother" and Chithi (Tamil: சித்தி) if younger meaning "small-Mother". Hence, their sons and daughters were same as brothers and sisters and they never inter-marry. Marriages in these cultures are allowed only between the cousins or outside people and not between brothers and sisters specified here.

The "family relationship" between two individuals a and b, where Ga and Gb respectively are the number of generations between each individual and their nearest common ancestor, can be calculated by the following:

Note that if one of the individuals is the ancestor of the other, one of Ga and Gb is zero and so x is zero.

If they only share one nearest common ancestor rather than two, then the word "half" is sometimes added at the beginning of the relationship.

Granduncle/grandaunt and grandnephew/grandniece are equivalent to great-uncle/great-aunt and great-nephew/great-niece. Both great-uncle and granduncle refer to an uncle of one's father or mother. Neither form is definitively more correct than the other. 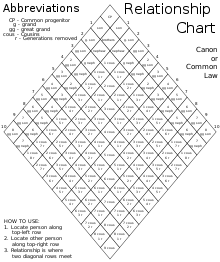 Canon Law Relationship Chart. See an example of how to use chart.

Another visual chart used in determining the legal relationship between two people who share a common ancestor is based upon a diamond shape, usually referred to as a "canon law relationship chart".

The chart is used by placing the "common progenitor" (the person from whom both people are descended) in the top space in the diamond shaped chart, and then following each line down the outside edge of the chart. Upon reaching the final place along the opposing outside edge for each person, the relationship is then determined by following that line inward to the point where the lines intersect. The information contained in the common "intersection" defines the relationship.

For a simple example, in the illustration to the right, if two siblings use the chart to determine their relationship, their common parents are placed in the topmost position and each child is assigned the space below and along the outside of the chart. Then, following the spaces inward, the two would meet in the "brother (sister)" diamond. If their children want to determine their relationship, they would follow the path established by their parents, but descend an additional step below along the outside of the chart (showing that they are grandchildren of the common progenitor); following their respective lines inward, they would come to rest in the space marked "1st cousin". In cases where one side descends the outside of the diamond further than the other side because of additional generations removed from the common progenitor, following the lines inward shows both the cousin rank (1st cousin, 2nd cousin) plus the number of times (generations) "removed".

In the example provided at the right, generations one (child) through ten (8th great-grandchild) from the common progenitor are provided; however the format of the chart can easily be expanded to accommodate any number of generations needed to resolve the question of relationship.