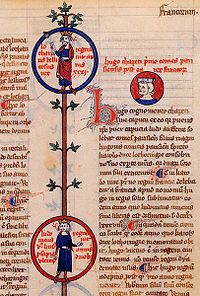 Consanguinity ("con- (with/together) sanguine (blood) -ity (noun marker)") refers to the property of being from the same kinship as another person. In that respect, consanguinity is the quality of being descended from the same ancestor as another person. Consanguinity is an important legal concept in that the laws of many jurisdictions consider consanguinity as a factor in deciding whether two individuals may be married or whether a given person inherits property when a deceased person has not left a will.

Issues of consanguinity arise in several aspects of the law. It is directly relevant in determining whether a couple can marry. These are linked to a jurisdiction's definition of incest, so that couples in an incestuous relationship will not be permitted to marry. Some United States jurisdictions forbid first-cousins to marry, while others limit the prohibition to brothers, sisters, mothers, fathers, aunts and uncles.

Several volumes of Smith's Laws, enacted from 1700 through 1829, contain certain public and private laws of the Province and Commonwealth of Pennsylvania. Several laws with a prescribed punishment against adultery, bigamy, incest and fornication and all combinations of those crimes were enacted in 1705.[2] 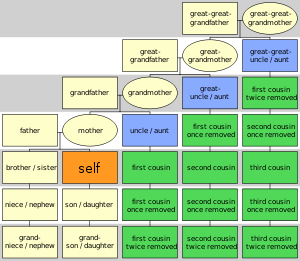 Consanguinity is also relevant in issues of inheritance. In regard to the law of intestate succession (when a person dies without a will), under the Uniform Probate Code of the United States section 2-103, after a surviving spouse receives his or her share, the descendants (depending on the circumstances this may include children, grandchildren, or great grandchildren, either biological or adopted) receive the remainder of the intestate estate. If there are no children, the decedent's parent(s) receive the remainder of the estate. If there are neither descendants nor parents, the decedent's estate is distributed to descendants of the decedent's parents (again, depending on the circumstances, brothers and sisters, nieces and nephews, grand nieces and nephews and great grand nieces and nephews). If there are no descendants, parents, or descendants of parents, then the deceased's property passes to descendants of the grandparents of the decedent (uncles and aunts, first cousins, or first cousins once, twice, or thrice removed).

Also, some jurisdictions prohibit individuals from serving on a jury in which they have a certain degree of consanguinity with the defendant.[3]

In the Roman Catholic Church, unwittingly marrying a closely consanguineous blood relative is grounds for an annulment, but dispensations were granted, actually almost routinely (the Canon law of the Catholic Church banned marriages within the fourth degree of relationship [third cousins] from at least the year 1215). In the Canon Law system (as well as in the common law system), the degree of relationship is determined by counting the number of steps counted between each party to the common ancestor and taking the higher number of the two. The general rule was that while fourth cousins could marry without dispensation, those more closely related needed dispensation, with it becoming harder and harder to obtain the closer the couple were related.

Adoption may or may not be considered at law to create such a bond; in most Western societies, adoptive relationships are considered blood relationships for these purposes, but in others, including both Japan and ancient Rome, it was common for a couple with only daughters to adopt a son-in-law, making the marriage one between adoptive siblings.[citation needed]

Among the Christian Habesha highlanders of Ethiopia and Eritrea (the predominantly orthodox Christian Amhara and Tigray-Tigrinya), it is a tradition to be able to recount one's paternal ancestors at least 7 generations away starting from early childhood, because "those with a common patrilineal ancestor less than seven generations away are considered 'brother and sister' and may not marry." The rule is less strict on the mother's side, where the limit is about four generations back, but still determined patrilinearly. This rule does not apply to Muslims or other ethnic groups.[4]

As a working definition, unions contracted between persons biologically related as second cousins or closer (F ≥ 0.0156) are categorized as consanguineous. This arbitrary limit has been chosen because the genetic influence in marriages between couples related to a lesser degree would usually be expected to differ only slightly from that observed in the general population. Globally, the most common form of consanguineous union contracted is between first cousins, in which the spouses share 1/8 of their genes inherited from a common ancestor, and so their progeny are homozygous (or more correctly autozygous) at 1/16 of all loci. Conventionally this is expressed as the coefficient of inbreeding (F) and for first cousin offspring, F = 0.0625. That is, the progeny are predicted to have inherited identical gene copies from each parent at 6.25% of all gene loci, over and above the baseline level of homozygosity in the general population. In some large human populations genetically closer marriages also are favoured, in particular uncle-niece and double first cousin unions where the level of homozygosity in the progeny is equivalent to 0.125.

The Ancient Indian seers developed an interesting practice of observing Gotra during rituals and Marriages. The term Gotra broadly refers to people who are descendants in an unbroken male line from a common male ancestor.[6]
Ayurveda clearly states that marriage within the Gotra is a consanguineous marriage which can lead to many gestational and genetic problems in the fetus. So it has become a common practice in the Hindu households during pre-marriage discussions to ask the couples' Gotra. Couples of the same Gotra are advised not to marry. The advisers of this system say that this practice definitely helps in reducing the gestational problems and ensures a healthy progeny.

Historically, some European nobles cited a close degree of consanguinity when they required convenient grounds for divorce, especially in contexts where religious doctrine forbade the voluntary dissolution of an unhappy or childless marriage. Conversely, the consanguinity law of succession requires the next monarch to be of the same blood of the previous one; allowing, for example, illegitimate children to inherit.[citation needed]

It is estimated that 55% of marriages between Mirpuri (Kashmiri) Pakistani immigrants in the United Kingdom are between first cousins,[7][8][9] where "preferential patrilateral parallel cousin marriage" (where a boy marries his father's brother's daughter) is often favored.

The offspring of consanguinous relationships are at greater risk of certain genetic disorders. Autosomal recessive disorders occur in individuals who are homozygous for a particular recessive gene mutation. This means that they carry two copies (alleles) of the same gene. Except in certain rare circumstances (new mutations or uniparental disomy) both parents of an individual with such a disorder will be carriers of the gene. Such carriers are not affected and will not display any signs that they are carriers, and so may be unaware that they carry the mutated gene. As relatives share a proportion of their genes, it is much more likely that related parents will be carriers of an autosomal recessive gene, and therefore their children are at a higher risk of an autosomal recessive disorder. The extent to which the risk increases depends on the degree of genetic relationship between the parents; so the risk is greater in mating relationships where the parents are close relatives, but for relationships between more distant relatives, such as second cousins, the risk is lower (although still greater than the general population).[10]

The low genetic heterozygosity associated with increased consanguinity in a population (identified by microsatellite markers) increases its susceptibility to infectious pathogens such as tuberculosis and hepatitis.[11]