Yang Guifei
This is a Chinese name; the family name is Yang.

During the Anshi Rebellion, as Emperor Xuanzong was fleeing from the capital Chang'an to Chengdu, she was killed because his guards blamed the rebellion on her powerful cousin Yang Guozhong and the rest of her family.

Yang Yuhuan was born in 719, early in the reign of her future husband Emperor Xuanzong. Her great-great-grandfather Yang Wang (楊汪) was a key official during the reign of Emperor Yang of Sui, and, after the breakup of Sui Dynasty, served one of the contenders to succeed Sui, Wang Shichong the Emperor of Zheng; Yang Wang was then killed when Wang Shichong was defeated by Tang Dynasty forces in 621.[3] Yang Wang was from Huayin (華陰, in modern Weinan, Shaanxi), but his clan subsequently relocated to Yongle (永樂, in modern Yuncheng, Shanxi).

Yang Yuhuan's father Yang Xuanyan (楊玄琰) served as a census official at Shu Prefecture (蜀州, in modern Chengdu, Sichuan), and his family went there with him. He appeared to be sonless, but he had four daughters who were known to history—Yang Yuhuan and three older sisters, who were also beautiful.[4] Yang Xuanyan died when Yang Yuhuan was still young, so Yang Yuhuan was raised by her uncle Yang Xuanjiao (楊玄璬), who was a low-level official at Henan Municipality (河南府, i.e., Luoyang).

As princess and Taoist nun

In 733, Yang Yuhuan married the son of Emperor Xuanzong and Consort Wu, Li Mao the Prince of Shou; she was 16. She thus carried the title of Princess of Shou. After Consort Wu died in 737, Emperor Xuanzong was greatly saddened by the death of his then-favorite concubine. Some time after that however Princess Yang somehow came into Xuanzong's favor and the emperor decided to take her as his consort. However, since Princess Yang was already the wife of his son, Emperor Xuanzong steathily arranged her to become a Taoist nun with the tonsured name Taizhen in order to prevent criticisms that would affect his plan of making her his concubine. Yang then stayed, for a brief moment, as a Taoist nun in the palace itself, before Emperor Xuanzong made her an imperial consort after bestowing his son Li Mao a new wife. Yang hence became the favorite consort of the emperor like Consort Wu was before.

In 745, after Emperor Xuanzong gave the daughter of the general Wei Zhaoxun (韋昭訓) to Li Mao as his new wife and princess, he officially made Taizhen an imperial consort—with the newly created rank of Guifei, which was even greater than the previously highest rank of Huifei, carried by Consort Wu. He bestowed posthumous honors on her father Yang Xuanyan and created her mother the Lady of Liang. He also gave high offices to her uncle Yang Xuangui (楊玄珪) and cousins Yang Xian (楊銛) and Yang Qi (楊錡). Her three older sisters were created the Ladies of Han, Guo, and Qin, and it was said that whenever the noble women were summoned to imperial gatherings, even Emperor Xuanzong's highly honored sister Li Chiying (李持盈) the Princess Yuzhen did not dare to take a seat more honorable than theirs. Emperor Xuanzong also gave his favorite daughter Princess Taihua (born of Consort Wu) to Yang Qi in marriage. The five Yang households—those of Yang Xian, Yang Qi, and the Ladies of Han, Guo, and Qin—were said to be exceedingly honored and rich, and all of the officials fought to flatter them. Also around the same time, her second cousin Yang Zhao (whose name was later changed to Yang Guozhong) was also introduced to Emperor Xuanzong by Consort Yang, and Yang Zhao began to be promoted due to his flattery of the emperor.

Consort Yang became so favored that whenever she rode a horse, the powerful eunuch Gao Lishi would attend her. 700 laborers were conscripted to sew fabrics for her. The officials and generals flattered her by offering her exquisite tributes. In 746, there was an occasion when she angered Emperor Xuanzong by being jealous and rude to him, and he had her sent to her cousin Yang Xian's mansion. Later that day, however, his mood was such that he could not eat, and the servants were battered by him for minor offenses. Gao knew that he missed Consort Yang, and Gao requested that the treasures in Consort Yang's palace be sent to her. Emperor Xuanzong agreed, and further sent imperial meals to her as well. That night, Gao requested that Emperor Xuanzong welcome Consort Yang back to the palace, a request that Emperor Xuanzong easily agreed to. Thereafter, she was even more favored, and no other imperial consort drew the favor of Emperor Xuanzong.

In 750, there was another occasion at which Consort Yang offended Emperor Xuanzong with her words, and he sent her back to her clan. The official Ji Wen (吉溫) told Emperor Xuanzong that he overreacted, and Emperor Xuanzong regretted his actions. He again sent imperial meals to her, and she wept to the eunuchs delivering the meal, stating:

My offense deserves death, and it is fortunate that His Imperial Majesty did not kill me, but instead returned me to my household. I will forever leave the palace. My gold, jade, and treasures were all given me by His Imperial Majesty, and it would be inappropriate for me to offer them back to him. Only what my parents gave me I would dare to offer.

She cut off some of her hair and had the hair taken back to Emperor Xuanzong. Emperor Xuanzong had Gao escort her back to the palace, and thereafter loved her even greater. 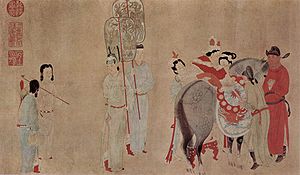 Yang Guozhong and An Lushan soon were in conflict with each other, and Yang Guozhong repeatedly tried to provoke An into rebelling, by actions including arresting and executing staff members at An's mansion in Chang'an. In 755, An finally reciprocated. In order to try to placate the populace, which believed that Yang Guozhong had provoked the rebellion, Emperor Xuanzong considered passing the throne to his crown prince Li Heng. Yang Guozhong, who was not on good terms with Li Heng, feared this development, and persuaded Consort Yang and the Ladies of Han, Guo, and Qin to speak against it. Emperor Xuanzong, for the time being, did not abdicate the throne.

In 756, General Geshu Han was defeated by An's forces, after being forced by Yang Guozhong to engage An out of fear that Geshu Han himself might usurp the throne, and Tong Pass, the last major defense, fell to An's forces. Yang Guozhong suggested fleeing to Chengdu, the capital of Jiannan Circuit. On 14 July,[6] Emperor Xuanzong, keeping the news secret from the people of Chang'an, took the imperial guards to escort him, Consort Yang, her family, and his immediate clan members, and exited Chang'an, heading toward Chengdu. Attending him were Yang Guozhong, his fellow chancellor Wei Jiansu, the official Wei Fangjin (魏方進), the general Chen Xuanli (陳玄禮), and some eunuchs and ladies in waiting close to him.

On 15 July,[1] Emperor Xuanzong's train reached Mawei Station (simplified Chinese: 马嵬驿; traditional Chinese: 馬嵬驛; pinyin: Mǎwéi Yì, in modern Xianyang, Shaanxi). The imperial guards were not fed and became angry at Yang Guozhong. Chen also believed that Yang Guozhong had provoked this disaster and planned to accuse him; he reported his plans to Li Heng through Li Heng's eunuch Li Fuguo, but Li Heng was hesitant and gave no approval. Meanwhile, Tufan emissaries, who had followed Emperor Xuanzong south, were meeting with Yang Guozhong and complaining that they also had not been fed. The soldiers of the imperial guard took this opportunity to proclaim that Yang Guozhong was planning treason along with the Tufan emissaries, and they killed him, along with his son Yang Xuan (楊暄), the Ladies of Han and Qin, and Wei Fangjin. Wei Jiansu was also nearly killed, but was spared at the last moment with severe injuries. The soldiers then surrounded Emperor Xuanzong's pavilion, and refused to scatter even after Emperor Xuanzong came out to comfort them and order them to disperse. Chen publicly urged him to put Consort Yang to death—which Emperor Xuanzong initially declined. After Wei Jiansu's son Wei E (韋諤) and Gao Lishi spoke further, Emperor Xuanzong finally resolved to do so. He therefore had Gao take Consort Yang to a Buddhist shrine and strangle her. After he showed the body to Chen and the other imperial guard generals, the guard soldiers finally dispersed and prepared for further travel. Meanwhile, Yang Guozhong's wife Pei Rou (裴柔), son Yang Xi (楊晞), the Lady of Guo, and the Lady of Guo's son Pei Hui (裴徽) tried to flee, but were killed in flight. Consort Yang was buried at Mawei, without a coffin, but with masses of fragrances, wrapped in purple blankets.

In 757, Prince Li Heng, who had taken the throne as Emperor Suzong, recaptured Chang'an and welcomed ex-Emperor Xuanzong, then Taishang Huang (retired emperor) back to the capital. Emperor Xuanzong went through Mawei on his way back to Chang'an. He wanted to locate Consort Yang's body and rebury her with honor. The official Li Kui spoke against it, pointing out that the imperial guard soldiers would still be prone to reprisals if he did so. However, Emperor Xuanzong secretly sent eunuchs to rebury her with a coffin. When they found the body, it had decomposed, but the fragrance bag buried with her was still fresh. The eunuchs returned with the fragrance bag, and upon its presentation to Emperor Xuanzong, he wept bitterly. When he returned to Chang'an, he had a painter create a picture of Consort Yang in a secondary palace, and often went there to view the portrait.

Consort Yang Guifei was known for having a full and fleshy figure, which was a much sought-after quality at the time, but must not be viewed in the modern context of someone who is overweight. She was often compared and contrasted with Empress Zhao Feiyan, the beautiful wife of Emperor Cheng of Han, because Consort Yang was known for her full build while Empress Zhao was slender. This led to the Four-character idiom yanshou huanfei (Chinese: 燕瘦環肥; pinyin: yàn shòu huán féi), describing the range of the types of beauties.

Lychee was a favorite fruit for Yang, and the emperor had the fruit, which was only grown in southern China, delivered by the imperial courier's fast horses, whose riders would take shifts day and night in a Pony Express-like manner, to the capital. (Most historians believe the fruits were delivered from modern Guangdong, but some believe they came from modern Sichuan.)

A copy of the outline of her right hand still exists, having been carved on a large stone at the site of the Xi'an Palace.[7]

Consort Yang was also granted use of the Huaqing Pool which had been the exclusive private pool of previous Tang Emperors.

In the following generation, a long poem, "Song of the Everlasting Sorrow" (長恨歌), was written by the poet Bai Juyi describing the Emperor's love for her and perpetual grief at her loss. It became an instant classic, known to and memorized by Chinese schoolchildren far into posterity. The story of Yang Guifei and the poem also became highly popular in Japan and served as sources of inspiration for the classical novel The Tale of Genji which begins with the doomed love between an emperor and a consort, Kiritsubo, who is likened to Consort Yang.

A Japanese rumour state that Lady Yang had been rescued, escaped to Japan and lived her remaining life there. In Japanese, she is known as Yōkihi.

Yang's story has been often retold. While some literature describes her as the author of much misfortune, other writings sympathize with her as a scapegoat. These stories of varying points of view include:

She is also well-known in Japan, and Noh plays have been staged based on her story.