Animation of LCD, both unlit and with electroluminescent backlight switched on. 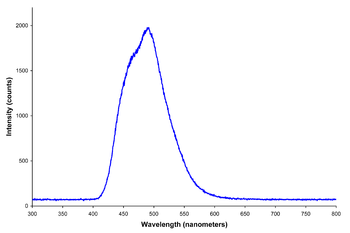 Spectrum of a blue/green electroluminescent light source for a clock radio (similar to the one seen in the above image). Peak wavelength is at 492 nm and the FWHM spectral bandwidth is quite wide at about 85 nm.

The most typical inorganic thin-film EL (TFEL) is ZnS:Mn with yellow-orange emission. Examples of the range of EL material include:

The most common electroluminescent (EL) devices are composed of either powder (primarily used in lighting applications) or thin films (for information displays.)

Sylvania Lighting Division in Salem and Danvers, MA, produced and marketed an EL night lamp (right), under the trade name Panelescent at roughly the same time that the Chrysler instrument panels entered production. These lamps have proven incredibly reliable, with some samples known to be still functional after nearly 50 years of continuous operation. Later in the 1960s Sylvania's Electronic Systems Division in Needham, MA, developed and manufactured several instruments for the Apollo Lunar Lander and Command Module using electroluminescent display panels manufactured by the Electronic Tube Division of Sylvania at Emporium, PA. Raytheon, Sudbury, MA, manufactured the Apollo guidance computer which used a Sylvania electroluminescent display panel as part of its display-keyboard interface (DSKY).

Powder phosphor-based electroluminescent panels are frequently used as backlights to liquid crystal displays. They readily provide a gentle, even illumination to the entire display while consuming relatively little electric power. This makes them convenient for battery-operated devices such as pagers, wristwatches, and computer-controlled thermostats and their gentle green-cyan glow is a common sight in the technological world. They do, however, require relatively high voltage (between 60 and 600 volts).[1] For battery-operated devices, this voltage must be generated by a converter circuit within the device; this converter often makes an audible whine or siren sound while the backlight is activated. For line-voltage operated devices, it may be supplied directly from the power line. Electroluminescent nightlights operate in this fashion. Brightness per unit area increases with increased voltage and frequency.[2]

Thin film phosphor electroluminescence was first commercialized during the 1980s by Sharp Corporation in Japan, Finlux (Oy Lohja Ab) in Finland, and Planar Systems in the USA. Here, bright, long life light emission is achieved in thin film yellow-emitting manganese-doped zinc sulfide material. Displays using this technology were manufactured for medical and vehicle applications where ruggedness and wide viewing angles were crucial, and liquid crystal displays were not well developed. In 1992 Timex introduced its Indiglo EL display on some watches.

The display applications are primarily passive (i.e., voltages are driven from edge of the display cf. driven from a transistor on the display) Similar to LCD trends, there have also been Active Matrix EL (AMEL) displays demonstrated, where circuitry is added to prolong voltages at each pixel. The solid state nature of TFEL allows for a very rugged and high resolution display fabricated even on silicon substrates. AMEL displays of 1280x1024 at over 1000 lines per inch (lpi) have been demonstrated by a consortium including Planar Systems.[3][4]

Electroluminescent technologies have low power consumption compared to competing lighting technologies, such as neon or fluorescent lamps. This, together with the thinness of the material, has made EL technology valuable to the advertising industry. Relevant advertising applications include electroluminescent billboards and signs. EL manufacturers are able to control precisely which areas of an electroluminescent sheet illuminate, and when. This has given advertisers the ability to create more dynamic advertising which is still compatible with traditional advertising spaces.

An EL film is a so-called Lambertian radiator: Unlike with neon lamps, filament lamps or LEDs, the brightness of the surface appears the same from all angles of view; electroluminescent light is not directional and therefore hard to compare with (thermal) light sources measured in lumens or lux. The light emitted from the surface is perfectly homogeneous and is well-perceived by the eye. EL film produces single-frequency (monochromatic) light that has a very narrow bandwidth, is absolutely uniform and visible from a great distance. 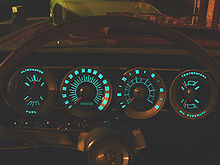 In principle, EL lamps can be made in any color. However, the commonly-used greenish color closely matches the peak sensitivity of human vision, producing the greatest apparent light output for the least electrical power input. Unlike neon and fluorescent lamps, EL lamps are not negative resistance devices so no extra circuitry is needed to regulate the amount of current flowing through them.