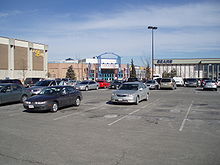 Exterior shot of the Pen Centre viewed from the south.

The Pen Centre (originally The Niagara Peninsula Shopping Centre) is the largest mall in the Niagara Region, located in St. Catharines, Ontario. At one point, The Pen was the fourth largest mall in Canada[1], with over one million square feet of floor space. Located next to the Highway 406, it features over 180 brand-name stores, three major department stores, a supermarket, six restaurants, a ten-screen movieplex, a ladies-only health club, and more recently, five big-box format stores. It also features the region's only H&M store. In addition, recent renovations have added more screens into the movieplex.

In 2011, the mall began a $13 million dollar renovation of the common area, including 3,600 sq. ft. Of new skylights, new food court, floors and ceiling treatments. Target announced that they will open a store in the centre's Zellers location, scheduled to open in the spring of 2013.

The Pen Centre originally was an outdoor mall, eventually enclosed and expanded several times. The original anchors were Miracle Mart department store, Miracle Food Mart, Sears and Zellers. The Miracle Food Mart closed and Zehrs was added to the mall. Expansions added Eatons and the cinemas. Miracle Mart department store was sold to Robinson's which in turn became The Bay. When Eaton's went bankrupt the space was subdivided into Winners, A Buck or Two, EB Games, Mappins Jewellers, Sport Chek and Old Navy.