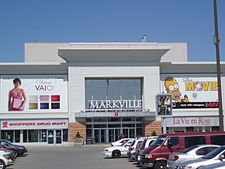 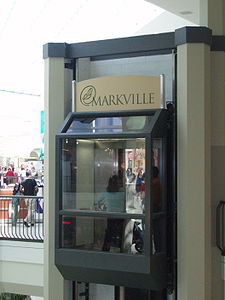 Elevator inside the shopping centre

Markville Shopping Centre is a shopping mall located at 5000 Highway 7 East (at McCowan Road) in Markham, Ontario, Canada. Markville Mall opened in 1982. The mall is owned by Cadillac Fairview, and was named for its proximity to both the historical villages of Markham and Unionville (now both incorporated in the town of Markham). With a gross leasable area of 981,000 square feet (91,100 m2), Markville is the 28nd-largest mall in Canada and the second-largest in York Region after Vaughan Mills.[1]

The mall has been remodeled extensively in recent years, including the recent additions of standalone East Side Mario's and Swiss Chalet restaurants in front of the mall facing Highway 7. For several years the Swiss Chalet location supplemented a pre-existing location on the other side of McCowan, but the old location closed in early 2010.[citation needed] This may have been the closest proximity of two operating Swiss Chalets in all of Canada.[verification needed] Markville Mall is currently going through a extensive renovation.

Markville Mall is currently being renovated by EllisDon for $110 million. This is the first renovation at Markville Mall since the original expansion of the mall in 1991. The renovation will take 2 years to complete, finishing for Christmas 2013, although the food court will be finished by Christmas 2012. The interior food court will moved and remodelled, and two new outdoor patio eating areas will be added. The renovation will also include installation of 180,000 square feet (17,000 m2) of porcelain tile flooring and 12,000 linear feet of glass handrails. Over 250,000 square feet (23,000 m2) of commercial space will be re-merchandised, including brands new to Canada or the GTA.[2]