Supermodel
For the RuPaul song, see Supermodel (You Better Work). 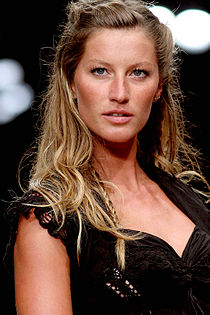 The term supermodel (also spelled super-model,[3][4][5][6][7] super model[8][9][10][11]) refers to a highly-paid fashion model who usually has a worldwide reputation and often a background in haute couture and commercial modeling. The term became prominent in the popular culture of the 1980s.[12] Supermodels usually work for top fashion designers and labels. They have multi-million dollar contracts, endorsements and campaigns. They have branded themselves as household names and worldwide recognition is associated with their modeling careers.[13][14][15][16] They have been on the covers of various magazines. Claudia Schiffer stated, "In order to become a supermodel one must be on all the covers all over the world at the same time so that people can recognise the girls."[17][18]

Origins of term and first supermodel

An early use of the term "supermodel" appeared in 1891 in an interview with artist Henry Stacy Marks for The Strand Magazine, in which Marks told journalist Harry How, "A good many models are addicted to drink, and, after sitting a while, will suddenly go to sleep. Then I have had what I call the 'super' model. You know the sort of man; he goes in for theatrical effect;..."[19] In October 1942, a writer named Judith Cass had used the term "supermodel" for her article in the Chicago Tribune, which headlined "Super Models are Signed for Fashion Show".[20][21] Later in 1943, an agent named Clyde Matthew Dessner used the term in a "how-to" book he wrote about modeling entitled So You Want to Be a Model![22][23] According to Model: The Ugly Business of Beautiful Women by Michael Gross, Gross claimed the term "supermodel" was first used by Dessner. In 1947, anthropologist Harold Sterling Gladwin wrote "supermodel" in his book Men Out of Asia.[24] In 1949, the magazine Hearst's International Combined with Cosmopolitan referred to Anita Colby, the highest paid model at the time,[25] as a "supermodel": "She's been super model, super movie saleswoman, and top brass at Selznick and Paramount."[26]

In 1979, model Janice Dickinson claimed to have coined the term "supermodel" as a compound of Superman and model.[29] During an interview with Entertainment Tonight, Dickinson stated that her agent Monique Pilar of Elite Model Management asked her, "Janice, who do you think you are, Superman?" She replied saying, "No... I'm a supermodel, honey, and you will refer to me as a supermodel and you will start a supermodel division." Dickinson also claims to be the first supermodel.[29]

In the 1970s, some models became more prominent as their names became more recognizable to the general public. Sports Illustrated editor Jule Campbell abandoned then-current modeling trends for its fledgling Sports Illustrated Swimsuit Issue by photographing "bigger and healthier" California models[47] and printing their names by their photos, thus turning many of them into household names and establishing the issue as a cornerstone of supermodel status.[47]

In 1975, Margaux Hemingway landed a then-unprecedented million-dollar contract as the face of Fabergé's Babe perfume and the same year appeared on the cover of Time magazine, labelled one of the "New Beauties," giving further name recognition to fashion models.[48]

Lauren Hutton[49] became the first model to receive a huge contract from a cosmetics company and appeared on cover of Vogue 25 times.[50] Iman is considered to have been the first supermodel of color.[51] 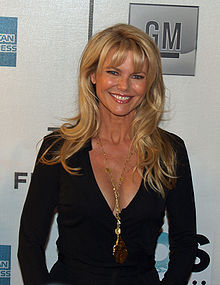 In the early 1980s, Inès de la Fressange was the first model to sign an exclusive modeling contract with an haute couture fashion house, Chanel.[55] During the early 1980s, fashion designers began advertising on television and billboards. Catwalk regulars like Gia Carangi,[56] Cheryl Tiegs,[56] Carol Alt, Christie Brinkley,[15][57] Kim Alexis,[56] Paulina Porizkova, Brooke Shields, Heather Locklear, and Elle Macpherson began to endorse products with their names, as well as their faces, through the marketing of brands such as the beverage Diet Pepsi to the extension of car title Ford Trucks. As the models began to embrace old-style glamour, they were starting to replace film stars as symbols of luxury and wealth. In this regard, supermodels were viewed not so much as individuals but as images.[58]

By the 1990s, the supermodel became increasingly prominent in the media.[59] The title became tantamount to superstar, to signify a supermodel's fame having risen simply from "personality." Supermodels did talk shows, were cited in gossip columns, partied at the trendiest nightspots,[58] landed movie roles, inspired franchises, dated or married film stars, and earned themselves millions.[15] Fame empowered them to take charge of their careers, to market themselves, and to command higher fees.

When Linda Evangelista mentioned to Vogue that "we don’t wake up for less than $10,000 a day," she may have been playfully pretending the role of an up-scale union representative, but the 1990 comment became the most notorious quote in modeling history. The defining year and turning point for models, fashion, and popular culture was 1990 when the combined power, beauty and influence of 5 women created such an impression on the world that a new word was coined especially for them: supermodel. 1990 began with a January British Vogue cover presenting five of the top modeling stars of the era hand-picked and photographed by Peter Lindbergh.[60] The now famous cover created such a stir, pop star George Michael cast the same five models in his music video for his international hit song, "Freedom! '90." The five models were Naomi Campbell, Cindy Crawford, Christy Turlington, Linda Evangelista, and Tatjana Patitz.[61] In 1990, their status as top models ended and a new era for the supermodel began. Each attained world-wide fame and fortune, sharing covers of all the international editions of Vogue, walking the catwalks for the world's top designers, and becoming known by their first names alone.[62]

In 1991, Christy Turlington signed a contract with Maybelline that paid her $800,000 for twelve days' work each year. Four years later, Claudia Schiffer reportedly earned $12 million for her various modeling assignments.[58] Authorities ranging from Karl Lagerfeld to Time had declared the supermodels more glamorous than movie stars.

As the 1990s progressed, the supermodels were joined by Claudia Schiffer and then Kate Moss. They were the most heavily in demand, collectively dominating magazine covers, fashion runways, editorial pages, and both print and broadcast advertising.[59][58][63] Excluding Moss, they are known as the "original supermodels".[18][64][65] 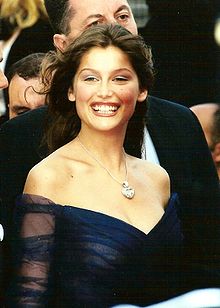 In the late 1990s, actresses, pop singers, and other entertainment celebrities began gradually replacing models on fashion magazine covers and ad campaigns.[66] The pendulum of limelight left many models in anonymity. A popular "conspiracy theory" explaining the supermodel's disappearance is that designers and fashion editors grew weary of the "I won't get out of bed for less than $10,000 a day" attitude and made sure no small group of models would ever again have the power of the Big Six.[63]

Charles Gandee, associate editor at Vogue, has said that high prices and poor attitudes contributed less to the decline of the supermodel. As clothes became less flashy, designers turned to models who were less glamorous, so they wouldn't overpower the clothing.[63] Whereas many supermodels of the previous era were American-born, their accents making for an easier transition to stardom,[15] the majority of models began coming from non-English speaking countries and cultures,[67] making the crossover to mainstream spokesperson and cover star difficult.[68] However, the term continued to be applied to notable models such as Laetitia Casta,[69][70] Eva Herzigová,[71] Carla Bruni,[72] Tatiana Sorokko,[73][74] Nadja Auermann,[75] Helena Christensen,[76] Patricia Velásquez,[77] Adriana Karembeu,[78][79] and Milla Jovovich.[80]

Emerging in the late 1990s, Gisele Bündchen became the first in a wave of Brazilian models to gain popularity in the industry and with the public. With numerous covers of Vogue under her belt, including an issue that dubbed her the "Return of the Sexy Model," Bündchen was credited with ending the "heroin chic" era of models.[81] Following in her footsteps by signing contracts with Victoria's Secret, fellow Brazilians Adriana Lima and Alessandra Ambrosio rose to prominence; however, this "new trinity" were unable to cross over into the world of TV, movies and talk shows as easily as their predecessors due to their foreign accents.[15] Several seasons later, they were followed by Eastern Europeans barely into their teens, pale, and "bordering on anorexic. They were too young to become movie stars or date celebrities; too skeletal to bag Victoria's Secret contracts; and a lack of English didn't bode well for a broad media career".[15] The opportunities for super-stardom were waning in the modeling world, and models like Heidi Klum and Tyra Banks took to television with reality shows like Project Runway and America's Next Top Model, respectively, to not only remain relevant but establish themselves as media moguls.[15]

Contrary to the fashion industry's celebrity trend of the previous decade, lingerie retailer Victoria's Secret continues to groom and launch young talents into supermodel status, awarding their high-profile "Angels" multi-year, multi-million-dollar contracts.[15] In addition to Klum, Banks, Bündchen, Lima, and Ambrosio, these models have included Karolína Kurková, Miranda Kerr, Selita Ebanks, and Marisa Miller. Although some, such as Claudia Schiffer, argued that Bündchen is the only model who comes close to earning the supermodel title,[82][83]

Criticism of the supermodel as an industry has been frequent inside and outside the fashion press, from complaints that women desiring this status become unhealthily thin to charges of racism, where the "supermodel" has generally to conform to a Northern European standard of beauty. According to fashion writer Guy Trebay of The New York Times, in 2007, the "android" look is popular, a vacant stare and thin body serving, according to some fashion industry conventions, to set off the couture. This was not always the case. In the 1970s, black, heavier and "ethnic" models predominated the runways but social changes since that time have made the power players in the fashion industry flee suggestions of "otherness".[85]

The popular media often applies the term loosely to some who fall short of supermodel status. Geraldine Maillet, the celebrated French writer and former model, relates with humour and cynicism the rise and decline of the supermodels in her book Presque Top Model.