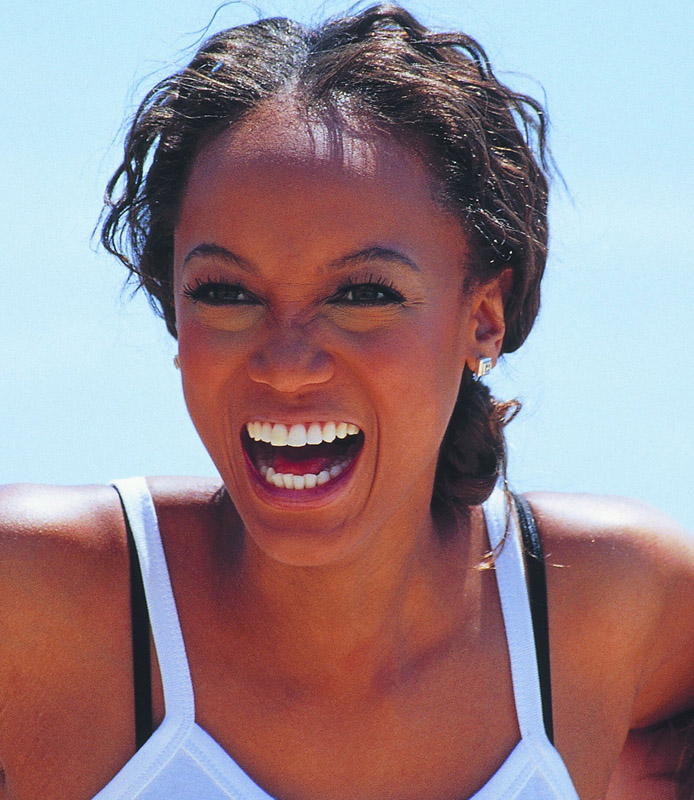 Banks was born in , the daughter of Carolyn (née London), a fashion manager and NASA photographer and Donald Banks, a computer consultant. [ [http://www.filmreference.com/film/26/Tyra-Banks.html Tyra Banks Biography (1973-) ] ] The couple divorced in 1990, when Tyra was sixteen, although the relationship of her parents and especially her brother Devin Banks (born 1968) stayed friendly.Fact|date=April 2008 Later, Carolyn married Clifford Johnson; she now goes by Carolyn London-Johnson. Banks grew up in Inglewood, later attended and graduated in from Immaculate Heart High School in Los Angeles. She began modeling in the 11th grade.

Within Banks' first week in Paris, other designers were so entranced by her presence on the runway that she was booked for an unprecedented 25 shows; a record in the business for a newcomer. She has done extensive print and/or runway work for fashion/advertising giants such as , , , , Bill Blass, , , , , , Gemma Kahng, , , Maria Snyder, , Aislinn Dubois Modeling Agency , Milk, , , , , , Randy Kemper, Richard Tyler, , , , , , and Yves Saint Laurent. She has appeared on the covers of high fashion magazines such as "Vogue", "", "Cosmopolitan", and "".

Banks was the first African American woman on the covers of "" and the "".

Banks retired from modeling in to concentrate on her television show. She walked the runway for the final time at the 2005 Victoria's Secret Fashion Show. Banks is listedas one the models featured in a Playboy pictorial on with on the cover, and included , , , , , , , , Claudia Schiffer, and .

Move into television and film

Banks' television career began on the fourth season of "," in which she played lead character Will's old friend , and made seven appearances throughout the series. Other screen credits include "", "", "'s " (in which she was featured as special guest host and team captain), "" and "" (guest-starring as a ""). She also appeared as a guest in the animated talk show in an episode titled "Chinatown."

Currently, Banks can be seen on television as the hostess, judge, and executive producer of television show "". In addition, she hosts "", a daytime aimed at younger women, which premiered on , and recently began its third season, drawing over 1.9 million viewers an episode.Fact|date=February 2008 The show features stories about everyday people mixed in with celebrity interviews, much like the early format of "". Under the slogan "Every woman has a story...and it happened to Tyra too.", Banks promotes her show using emotional flashbacks to her own childhood and adolescence. Many of the episodes deal with issues facing women today. Tyra and other experts give women advice on fashion, relationships, and more. The first two seasons of the show were recorded in Banks' hometown of Los Angeles, but beginning with the fall 2007 season, the show moved to New York City. In , Tyra Banks won the for her work and production on the Tyra Banks Show.

In late , Banks got the go ahead from ANTM network, CW, to start work on a new reality television series based on fashion magazines called .

In 1998, Banks authored a book entitled . The book was advertised as a resource for helping women to make the most out of their natural beauty. [ [http://www.newyorktimesbestsellerlist.org/reviews/tyra-banks Tyra Banks and Books] ]

Banks has appeared in several music videos including 's "Black or White," 's "," 's "" and 's "" (with fellow supermodel ). In 2004, she recorded her first single, "Shake Ya Body", which had a music video featuring the final 6 contestants.( [http://www.youtube.com/watch?v=mRa1hl2Efss Music Video] ) The video's world premiere was on , but the single was a failure for Banks. She stated on Cycle of Top Model that "Singing has been a passion of mine for a long, long time...6 years on the down low - been ducking in and out of studios cutting tracks," but on her talk show she stated, "I can't believe I wasted 6 years of doing something that I didn't finish...I was almost able to release my album 'T.Y.R.A' but since my music career hit rock bottom I quit."Citequote|date=October 2008

Though "Shake Ya Body" was a failure, record producer told JET in 2004 that Banks "has what it takes to pull it off...she had a hungriness to want to be in the studio all the time. Some people want to be divas in the studio and work for three or four hours. You had to tell Tyra to stop or she will keep you going".

Banks released a single with NBA star , titled "K.O.B.E.", which was performed on , and had a single/soundtrack from the Disney movie "Life-Size" called "Be A Star". She is also credited with performing the theme song to .Fact|date=April 2008

Tyra is currently living with model and friend Amber Rives in , . [http://www.neoows.com/tags/index.jsp?tag=Amber%20Rives] [http://splashnewsonline.celebuzz.com/tyrabanks/]