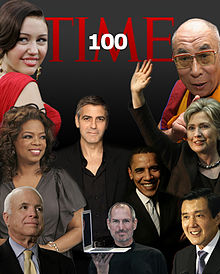 Time 100 is an annual list of the 100 most influential people in the world, as assembled by Time. First published in 1999 as a result of a debate among several academics, the list has become an annual event.

The list was first published in 1999, when Time magazine named the 100 most influential people of the 20th century. Based on the popularity of the installment, in 2004 Time magazine decided to make it an annual issue, listing the 100 people most influencing the world. Making the list is frequently mistaken as an honor; however, Time makes it very clear that people are recognized for changing the world, for better or for worse. Those recognized fall in one of five categories: Leaders & Revolutionaries, Builders & Titans, Artists & Entertainers, Scientists & Thinkers, and Heroes & Icons. Within each category, the 20 most influential people (sometimes pairs or small groups) are selected, for a grand total of 100 each year.

Note: The order of the following list is based on the number of times each person has appeared on the Time 100. Those who are tied are listed alphabetically. Those listed in bold are the select few whose repeat appearances include Time's ranking of the 100 most influential people of the 20th century.the most

First, there were those who came to their status by means of a very public possession of power; President George W. Bush is the pre-eminent example. Others, though they are rarely heard from in public, nonetheless have a real influence on the great events of our time. Think of Ali Husaini Sistani, the Grand Ayatullah of Iraq's Shi'ites. Still others affect our lives through their moral example. Consider Nelson Mandela's forgiveness of his captors and his willingness to walk away from the South African presidency after a single term.[1]

In the 2007 Time 100 list managing editor Richard Strengel explained that the Time 100 was not a list of the hottest, most popular or most powerful people, but rather the most influential, stating:

Influence is hard to measure, and what we look for is people whose ideas, whose example, whose talent, whose discoveries transform the world we live in. Influence is less about the hard power of force than the soft power of ideas and example. Yes there are Presidents and dictators who can change the world through fiat, but we're more interested in innovators like Monty Jones, the Sierra Leone scientist who has developed a strain of rice that can save African agriculture. Or heroes like the great chessmaster Garry Kasparov, who is leading the lonely fight for greater democracy in Russia. Or Academy Award winning actor George Clooney who has leveraged his celebrity to bring attention to the tragedy in Darfur.

The fact that the then British Prime Minister Tony Blair was excluded from the 2004 list caused mild controversy. Time magazine editor-at-large Michael Elliott defended the decision to consistently exclude Blair:

Gerhard Schröder and Jacques Chirac are not there either. This is a worldwide list. There are no Western European political leaders on it because they are not that powerful or influential at this time.[2]

Although George W. Bush has appeared on the list several times, controversy emerged when he was dropped from the list in 2007 in part because of the Democratic victory in the 2006 congressional election.[3] Former Senator Rick Santorum (R) of Fox News said:

The fact of the matter is, the president of the United States, I don't care who's in that office, is the most powerful man on the face of the Earth and has more influence over various aspects of lives, not just in this country, but around the world. And for Time magazine to dismiss that just shows you how biased and, I would argue, hateful they are.[4]

"Any U.S. president has a certain built-in influence," explained Adi Ignatius, deputy managing editor at Time, who oversaw the list. "Bush had actually squandered some of that built-in influence. His position on Iraq has cost him support in his own party...To a certain point, he sort of reached a lame-duck status,"[5]

The list has generated controversy over who was included in other years as well. In 2005 conservative commentator Ann Coulter was listed causing Salon.com to observe:

When Time magazine named Ann Coulter among its 100 "most influential people" last week, alongside such heavyweights as Ariel Sharon, Bill Clinton, Nelson Mandela, Kim Jong Il and the Dalai Lama, the choice produced guffaws online. Plugging the issue on Fox News last week, Time executive editor Priscilla Painton insisted it was Coulter's use of "humor" that made her so influential, stopping just short of suggesting that Coulter is the conservative Jon Stewart. But even Fox's Bill O'Reilly wasn't buying it. He pressed Painton: "Do you think people, Americans, listen to Ann Coulter? Do you think she has influence in public opinion?"[6]

While Time magazine defended Coulter on the grounds that she is a best-selling author whose controversial commentary has impacted the discourse of the world's most powerful nation, she was not considered influential enough to make a repeat appearance on the list.

In 2009, the winner of the annual Time 100 online poll was moot, the founder of the 4chan website, who received 16,794,368 votes. Time magazine claimed that their technical team "did detect and extinguish several attempts to hack the vote".[7] However, it was shown weeks before the poll ended that the results had been heavily edited by hackers.[8] The first letters of the top 21 names spell out "marblecake also the game". Marblecake is the name of the IRC channel where Anonymous started their campaign against Scientology,[8] and "the game" is a reference to "The Game" meme.

The Time 100 has been cited an academic analysis by Craig Garthwaite and Tim Moore, economists at the University of Maryland, College Park. In light of Oprah Winfrey holding the record for most appearances on the Time 100, the economists decided to measure if Winfrey was influential enough to decide a U.S. presidential election by examining the impact of her endorsement of Barack Obama for president. The economists wrote the following:

Oprah Winfrey is a celebrity of nearly unparalleled influence. She has been named to Time magazine’s list of the 100 most influential people six times—more than any other individual, including the Dalai Lama, Nelson Mandela, Bill Gates, George Clooney and Rupert Murdoch. She was named one of the 100 most influential people of the 20th Century, an honor shared with Albert Einstein, Mohandas Karamchand (Mahatma) Gandhi, and Franklin D. Roosevelt. She was only one of four people who were included on these lists in both the 20th and 21st Century. The others included Mandela, Gates, and Pope John Paul II... The scope of Winfrey’s influence creates a unique opportunity to examine the effect of endorsements on political outcomes.

The economists found a statistically significant correlation between the number of Winfrey fans in a geographic region (as estimated by the sales of her magazine and book club selections) and the number of votes Obama received in that region during the race for the 2008 Democratic nomination for president. They found that the correlation even held up when they controlled for all kinds of confounding variables like race, gender, income, education, and sales of other magazines. They further found that the correlation only emerged after Winfrey had endorsed Obama, suggesting that it was the influence of her endorsement that caused the correlation. When they statistically removed the correlation to see how Obama would have performed without Winfrey's endorsement, they found that over one million votes vanished from Obama’s total in the Democratic primary and Clinton receives far more votes than Obama does.[9]