The west side of Upper New York Bay showing MOTBY, Port Jersey, and the no longer extant Caven Point pier extending into the harbor

In 1932, a basic plan was initiated to build a port terminal off the east coast of Bayonne into the bay to create additional industrial, maritime, and distribution space. After the plan was completed in 1939, dredging and filling began. At the outbreak of World War II, the United States Navy was looking for a location for a port on the East Coast and became interested in the site for a large dry-dock and supply center. The Bayonne military base was opened by the Navy in 1942 as a logistics and repair base, well connected to the transportation network of the Northeast Corridor. After the war MOTBY became port for part of the Atlantic Reserve Fleet or the Mothball Fleet.

In 1967, the peninsula became a US Army base.[3] It was a large shipping terminal by the standards of the day, and had the largest dry-dock on the eastern seaboard. Once cargo arrived at MOTBY, it could be placed directly into covered warehouses, or onto uncovered, but fully secure staging areas. All types of cargo, from heavy, outsized weapons such as the M1A2 tank and the Patriot missile, to the full range of munitions available to fighting forces could be loaded by Bayonne's specially trained unionized work force using state of the art, dedicated rail lines. Every type of roll-on/roll-off vessel in the Military Sealift Command (MSC) inventory could be accommodated. This capability was used during the Persian Gulf War (2 August 1990 – 28 February 1991) and during operations in Somalia and Haiti. Dozens of military units (men and equipment) were shipped through MOTBY, as did as outsized cargo such as M1A2 tanks from as far as Fort Hood, Texas. The facility closed in 1999 under a US Base Realignment and Closure 1995 directive.[4] 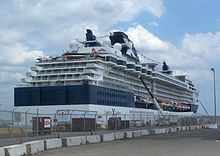 New housing at The Peninsula 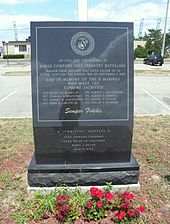 After closure, bids to permanently berth the battleship USS New Jersey, which had been decommissioned at the Atlantic Reserve Fleet in 1948, were unsuccessful.[5] The long pier has since been renamed The Peninsula at Bayonne Harbor by the Bayonne Local Redevelopment Authority (BLRA)[6] and is being redeveloped into a mix-used waterfront community of residential, light industrial, commercial, and recreational space. Construction is planned to take place in phases, with one section of housing currently completed.

A memorial park for the Tear of Grief, commemorating September 11th, 2001 and the Cape Liberty Cruise Port[7] are located at the end of the long pier. In 2005, eight PCC trolley cars from the Newark City Subway were given to the Bayonne to be rehabilitated and operated along a proposed 2.5-mile (4.0 km) loop to connect to the 34th Street station of the Hudson-Bergen Light Rail.[8]

Much of the HBO prison drama Oz was around MOTBY.[9]

In 2010, the Port Authority of New York and New Jersey purchased 130 acres (0.53 km2) along the waterfront for future use.[10] The Port Authority said it would likely not use the land for housing as currently zoned, indicating that additional port facilities would be created.[11] On July 29, the city counsel approved the sale at a price of $235 million, to be paid out over 24 years, much less than the city had hoped to earn from developing the property for housing. However economic conditions were not favorable to that project, which envisioned 6,700 housing units, and the city needed the cash to balance its budget. The Port Authority is expected to develop the property as a container port that will be capable of handling the larger container ships to be in service once the new, wider Panama Canal opens in 2014.[12] Some of these new ships will not fit under the current Bayonne Bridge, preventing them from reaching the large container facilities at Port Newark and Port Elizabeth.[13] Transhipment of containers to the national rail network is possible via the National Docks Secondary line using Lehigh Valley Railroad Bridge over Newark Bay,[14][15] to the Long Dock Tunnel through Bergen Hill.

Originally, a condition of the land sale was that the monuments to United States Marines who fought in the Korean War, and the 100-foot (30 m) Tear of Grief would be relocated. However, the move is no longer planned. [16][17]