Mendoza (Spanish pronunciation: [menˈdosa]) is the capital city of Mendoza Province, in Argentina. It is located in the northern-central part of the province, in a region of foothills and high plains, on the eastern side of the Andes. As of the 2001 census [INDEC], Mendoza's population was 110,993. The metropolitan population was 848,660 in 2001, making Greater Mendoza the fourth largest census metropolitan area in the country.

Ruta Nacional 7, the major road running between Buenos Aires and Santiago, runs through Mendoza. The city is a frequent stopover for climbers on their way to Aconcagua (the highest mountain in the Western Hemisphere) and for adventure travelers interested in mountaineering, hiking, horseback riding, rafting, and other sports. In the winter, skiers come to the city for its easy access to the Andes.

Two of the main industries of Mendoza area are olive oil production and wine making. The region around Greater Mendoza is the largest wine producing area in Latin America. As such, Mendoza is one of nine cities worldwide in the network of Great Capitals of Wine, and the city is an emerging wine tourism destination and base for exploring the hundreds of wineries in the region.

Mendoza Area Fundacional, Antigua Plaza Principal and cabildo, litography by A. Goering, 1858 (i.e. prior to the devastating 1861 earthquake). 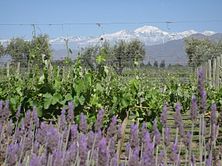 A vineyard in the Maipú winemaking district just outside Mendoza, with the Andes in the background.

On March 2, 1561, Pedro del Castillo founded the city and named it Ciudad de Mendoza del Nuevo Valle de La Rioja after the governor of Chile, Don García Hurtado de Mendoza.[2] Before the 1560s the area was populated by three tribes, the Huarpes, the Puelches, and the Incas. The Huarpes devised a system of irrigation that was later developed by the Spanish. This allowed for an increase in population that might not have otherwise occurred. The system is still evident today in the wide trenches (acequías, popularly known as 'yanqi traps'), which run along all city streets, watering the app. 100,000 trees, which line every street in Mendoza. The Spanish founded the city at the bank of river (present name) Río Mendoza, only later realizing that the "river" was a wide irrigation canal dug by the indigenous Huarpes people.

It is estimated that fewer than 80 Spanish settlers lived in the area before 1600, but later prosperity increased due to the use of indigenous and slave labor, and the Jesuit presence in the region. When nearby rivers were tapped as a source of irrigation in 1788 agricultural production increased. The extra revenues generated from this, and the ensuing additional trade with Buenos Aires, no doubt led to the creation of the state of Cuyo in 1813 with José de San Martín as governor. It was from Mendoza that San Martin, others Argentinian patriots and Chilean patriots organized the army with which they won the independence of Chile and Peru.[3]

Mendoza suffered a severe earthquake in 1861 that killed at least 5,000 people. The city was rebuilt, incorporating innovative urban designs that would better tolerate such seismic activity. Mendoza was rebuilt with large squares and wider streets and sidewalks than any other city in Argentina. Avenue Bartolomé Mitre and additional small squares are examples of that design. Tourism, wine production, and more recently the exploitation of hard commodities such as oil[4] and uranium[5] ensure Mendoza's status as a key regional center.

The city's suburbs, the most important of which are Godoy Cruz, Guaymallén, Las Heras, Luján de Cuyo, and Maipú, have in recent decades far outpaced the city proper in population. Comprising half the metro area population of 212,000 in 1947, these suburbs grew to nearly 7/8 of the total metro area of 894,000 by 2009, making Mendoza the most dispersed metro area in Argentina.[6] 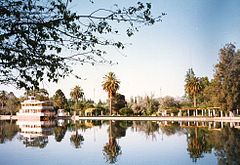 Mendoza has several museums, including the Museo Cornelio Moyano, a natural history museum, and the Museo del Área Fundacional (Historical Regional Foundation Museum) on Pedro del Castillo Square. The Museo Nacional del Vino (National Wine Museum), focusing on the history of winemaking in the area, is 17 km southeast of Mendoza in Maipú. The Casa de Fader, a historic house museum, is an 1890 mansion once home to artist Fernando Fader in nearby Mayor Drummond, 14 km south of Mendoza. The mansion is home to many of the artist's paintings.

The Fiesta Nacional de la Vendimia (The National Grape Harvest Festival) occurs in early March each year. Part of the festivities include a beauty pageant, where 17 beauty queens from each department of Mendoza Province compete, and one winner is selected by a panel of about 50 judges. The queen of Mendoza city's department does not compete and acts as host for the other queens.

In 2008 National Geographic listed Mendoza as one of the top 10 historic destinations in the world.[7]

Mendoza is a popular place to learn Spanish, and there are number of Spanish language schools, including Intercultural, Green Fields and SIMA.[8]

The city is centered around Plaza Independencia (Independence Plaza) with Avenida Sarmiento running through its center east-west, with the east side pedestrianized (peatonal). Other major streets, running perpendicular to Sarmiento, include Bartolomé Mitre, San Martín, and 9 de Julio (July 9th), those running parallel include Colón, and Las Heras. Four smaller plazas, San Martín, Chile, Italia, and España, are located 2 blocks off each corner of Independence Plaza. Unique to Mendoza are the exposed stone ditches, essentially small canals, which run alongside many of the roads supplying water to the thousands of trees that provide welcome shade.

The Parque General San Martín (General San Martín Park) was designed by Carlos Thays. Its grounds include a zoo, a football stadium and is also home of the Universidad Nacional de Cuyo. A view of the city is available from the top of Cerro de la Gloria (Mt. Glory). 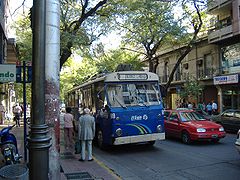 The public transport system includes buses, the Mendoza trolleybus system, and taxis. The trolleybuses are more comfortable than the city buses, but are slower, not as numerous nor is the system as extensive. In 2008, Translink of Vancouver, Canada sold part of its old trolleybus fleet to Mendoza.[9]

A heritage railway, El Tren del Vino (The Wine Train) is being planned which will also provide local transportation; it will run through wine producing districts of Mendoza.[10]

Mendoza's development was helped partly due to its position at the start of the Transandine Railway linking it to Santa Rosa de Los Andes in Chile. The only railway operable between Argentina and Chile, after many years of inactivity, is currently under restoration and testing for its revival as a freight line by Belgrano Cargas.[11][12][13][14]

The Transandine Railway is a 1,000 mm (3 ft 3 3⁄8 in) metre gauge line, with sections of Abt rack, whilst the railways it links with are both 1,676 mm (5 ft 6 in) broad gauge. A journey from Buenos Aires to Chile involved two breaks-of-gauge, and therefore two changes of train, one at Mendoza, and the other at Santa Rosa de Los Andes.

The city has also begun the construction of a new tramway line, the Metrotranvía de Mendoza, which will have a route of 12.5 km and will link five areas of the Greater Mendoza conurbation. The opening of the system is scheduled for 2011.[15]

French director Jean-Jacques Annaud shot his 1997 film, Seven Years In Tibet, in Mendoza and built dozens of sets ranging from a 220-yard (200 m) long recreation of the Tibetan capital city of Lhasa (built in the foothills of the Andes), to a 9,000-square-foot (840 m2) recreation of the Hall of Good Deeds in the Potala, the ancient palace of the Dalai Lama (built in an abandoned garlic warehouse outside the city).

Mendoza's climate can be characterized as arid (Köppen climate classification BWh or BWk depending on the isotherm used);[16] however, with extensive irrigation the surrounding landscape sustains cultivation with Mediterranean characteristics. Most precipitation in Mendoza falls in the summer months (November–March). Average temperatures for January (summer) are 32 °C (90 °F) during daytime, and 18.4 °C (65 °F) at night. July (winter) the average temperatures are 14.7 °C (58 °F) and 2.4 °C (36 °F), day and night respectively. Despite the intensity of agriculture, made possible due to irrigation from major rivers, Mendoza's annual rainfall is only 223.2 mm.

Mendoza is twinned with: