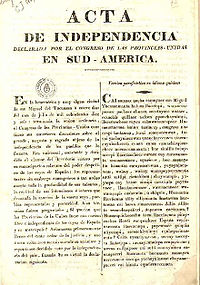 Declaration of Independence of the United Provinces of South America, in Spanish and Quechua

What today is commonly referred as the Independence of Argentina was declared on July 9, 1816 by the Congress of Tucumán. In reality, the congressmen that were assembled in Tucumán declared the independence of the United Provinces of South America, which is still today one of the legal names of the Argentine Republic. The Federal League Provinces,[1] at war with the United Provinces, were not allowed into the Congress. At the same time, several provinces from the Upper Peru that would later become part of present-day Bolivia, were represented at the Congress. 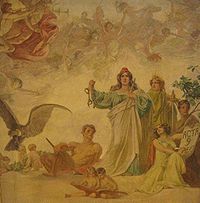 Allegory of the Declaration of Independence, by Luis de Servi.

The 1810 May Revolution followed the deposition of the Spanish king Ferdinand VII by the Napoleonic French. The revolution ended the authority of the Viceroy Cisneros and replaced it with the Primera Junta.

When the Spanish monarchy resumed its functions in 1814, Spain was determined to recover control over its colonies in the Americas. Moreover, the royalists from Peru had been victorious at the battles of Sipe-Sipe, Huaqui, Vilcapugio and Ayohuma, in Upper Peru, and seriously threatened the United Provinces from the north.

On April 15, 1815, a revolution ended the mandate of Carlos María de Alvear as Supreme Director and demanded that a General Congress be summoned. Delegate deputies, each representing 15,000 inhabitants, were sent from all the United Provinces of the Río de la Plata to the sessions, which started on March 24, 1816. However, the Federal League Provinces did not send delegates: the Argentine littoral Provinces (Santa Fé, Entre Ríos, Corrientes and Misiones), and the Eastern Province (modern-day Uruguay).

The Congress was inaugurated in the city of Tucumán, with 33 deputies. The presidency of the Congress would be rotated monthly. Because the Congress had the freedom to choose topics to debate, endless discussions ensued.

The voting finally ended on July 9 with a declaration of independence. The Declaration pointed to the circumstances in Europe of the past six years—the removal of the King of Spain by the Napoleon and the subsequent refusal of Ferdinand VII to accept constitutional rule both in the Peninsula and overseas. The Document claimed that Spanish America recovered its sovereignty from the Crown of Castile in 1808, when Ferdinand VII had been deposed, and therefore, any union between the overseas dominions of Spain and the Peninsula had been dissolved. This was a legal concept that was also invoked by the other Spanish American declarations of independence, such as Venezuela's (1811) and Mexico's (1810), which were responding to the same events. The president of the Congress at the time was Francisco Narciso de Laprida, delegate from San Juan Province. Subsequent discussions centered on what form of government the emerging state should adopt.

The house where the declaration was adopted has been rebuilt and is now a museum and monument: the House of Tucumán.

Signatories of the declaration