Corrientes (Spanish pronunciation: [koˈrjentes], Currents or Streams; Guarani: Taragui Tetãmini) is a province in northeast Argentina, in the Mesopotamia region. It is surrounded by (from the North, clockwise): Paraguay, the province of Misiones, Brazil, Uruguay, and the provinces of Entre Rios, Santa Fe and Chaco.

Before the arrival of the Spanish conquest, the Guaraní lived in a big area that also covered most of the current province of Corrientes. The city of Corrientes was founded on April 3, 1588 by Juan Torres de Vera y Aragón as a mid-stop between Asunción and Buenos Aires; the city flourished thanks to the traffic from the route. Jesuits erected missions in the north of the province, where they dedicated themselves to the expansion of the faith. In the wars of independence from Spain, Corrientes joined Artigas' Liga de los Pueblos Libres (1814–1820). The attack of Paraguayan forces on the province in 1865 marked the start of the War of the Triple Alliance. 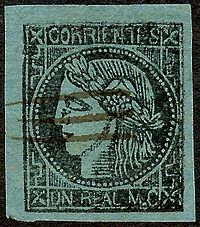 Corrientes is legendary in the world of philately for the postage stamps it issued from 1856 to 1880. These are among the very early or "classic" postage stamps of the world (the first, from Great Britain, were issued in 1840; those by the United States in 1847). The Corrientes stamps were close copies of the first issue of stamps from France, which depicted the profile head of Ceres, the Roman goddess of agriculture, and were individually crudely engraved by hand, so that each die is noticeably different, and were printed in small sheets. The first issues, from 1856 to 1860, bore the denomination in the lower panel; in 1860, the value panel was erased; the different denominations thereafter being indicated by the color of the paper used. As locally produced "primitives", the early Corrientes stamps have long been prized by collectors. After 1880, stamps of Argentina were used.[2]

During much of the 19th and 20th centuries, politics in Corrientes were dominated by the Romero Feris family, prominent local landowners who control most of the province's tobacco output. During most of this time, the Romero Ferises created one of Argentina's most bloated government payrolls (over 10% of total employment) and suppressed dissent and efforts at even modest land reform. Following contentious election results in 1991, however, public protest forced President Carlos Menem to remove Governor Raúl "Tato" Romero Feris from office and, though he was elected mayor of the province's capital in 1997, Romero Feris was ultimately indicted for embezzlement of public funds in 1999. He was sentenced to 7 years in prison in May, 2002.[3]

Corrientes had a significant impact in national politics in subsequent years. A UCR-led alliance defeated the Romero Feris machine in the 2001 governor's race, but the Corrientes UCR's continued support for President Néstor Kirchner led to a rebuke from the national committee of the UCR itself, and this triggered a revolt from the Corrientes chapter of the party, as well as a number of others' (notably in Mendoza Province). These differences led to the appearance that year of "K" Radicals – UCR governors and other lawmakers allied to President Kirchner.[4]

The northeastern tip of Corrientes Province was chosen as the site for Yacyretá Dam following an agreement between President Juan Perón and Paraguayan President Alfredo Stroessner in 1974. Yacyretá, whose 20 year-long construction and US$11 billion cost far exceeded initial estimates, is one of the largest hydroelectric dams in the world. Currently, an agreement is being pursued with Paraguay which would allow reservoir expansion works that could double the facility's current installed electric capacity of 4,050 MW.[5] 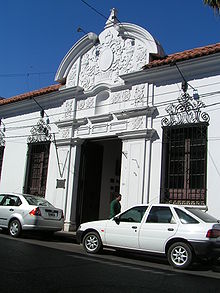 Culture in Corrientes has been primarily informed and influenced by its European and Guarani roots,a example of this chamamé music and dance.

Famous correntinos were independence hero General José de San Martín (born in 1778 in Yapeyú), and Juan Bautista Cabral (born in Saladas), who (according to popular legend) gave his life for the General in the Battle of San Lorenzo.

Tourist destinations in the Corrientes Province include the Iberá Wetlands and the Mburucuyá National Park.

As part of the subtropical area of Mesopotamia, the province has heavy rains and high temperatures with little daily and seasonal variation specially in the North, and no dry season. The Southern part of the province presents some signs of the neighbouring more temperate weather of the Pampas.

Summers throughout Corrientes are hot and humid: daily high temperatures in January average 33ºC (91F) and nighttime lows around 21ºC (70F). Thunderstorms and very common, and are often accompanied by lots of lightning and strong winds. Temperatures reach the 30ºC (86F) mark daily until late March or early April in the north, and by mid April, the northern regions average 26ºC (79F) during the day, and 17ºC (63F) at night, whereas further south the averages are 25ºC (77F) and 14ºC (57F). It is during the winter that the distinctions between the northern part and the southern part become more clear: in Corrientes city (northwest), midwinter averages remain very mild, with hights of 20ºC (68F) and lows of 11ºC (52F). Light morning frost happens sporadically. In Curuzu Cuatia, further south, temperatures are markedly cooler: the average high temperature is 18ºC (64F) and the average low temperature is 7ºC (45F), with frost to be expected several times every winter. The weather in the north feels summer-like in October, with highs of 28ºC (82F), whereas the spring season lags roughly one month behind in the south. Rainfall is higher in the fall and late spring, but remains high throughout the summer, and has a short, dryer spell in midwinter. The average ranges from 1,200 mm in the south to 1,800 mm in the extreme northeast.

Corrientes is surrounded by two rivers, the Uruguay River to the east, and the Paraná River to the northwest, that contour the shape of the province. The low shore of the Paraná produces frequent floodings. After the specially destructive one in 1982, a protective system has been started with the construction of barriers.

The province is for the most part a plain, with the highest points in the east. To the west, a series of descending platforms go down to the Paraná River. The Iberá Wetlands, an area of lagoons and swamps, is a vast depression from volcanic flow, covered later with fluvial and eolic sediments.

Corrientes, like much of the Argentine north, has long had relatively underdeveloped economy. Its 2006 output was estimated at US$4.2 billion, or, US$4,540 per capita (about half the national average).[6]

Agriculture is still one of the main activities in the province, adding 15% to its output. It's centred in citrus, tobacco, rice, tea, cotton and yerba mate, for which it's well known internationally. The timber industry uses 1,400 km² of pine and eucalyptus forests. 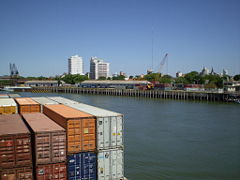 Port of Corrientes, on the Paraná River.

Bovine cattle has problems standing the heat and the low quality of the grass specially in the north of the province. For that reason, the Brangus breed is the most common in the area. In the south, different breeds can be found. 70,000 km² of the province's land are used for more than 4 million heads of cattle.

Among Corrientes' productive (non-services) activities, tobacco and its processing earns 45% of the province's gross income, food and derivates, 30%, and textiles, 16%.

On the Paraná River, near the city of Ituzaingó, the Yaciretá dam provides energy not only to the province, but to both Argentina and Paraguay.

Tourism has been growing in Corrientes Province due to the relevance that Esteros del Ibera has for ecotourism and birdwatching travelers. Golden dorado fishing has long attracted both local and outside tourism to Corrientes. 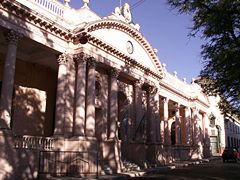 The province is divided into 25 departments (departamentos):