Conquest of the Desert

Conquest of the Desert 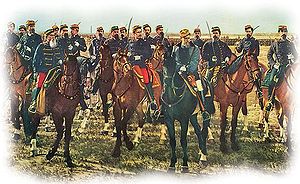 Conquest of the Desert, by Juan Manuel Blanes (fragment showing Julio Argentino Roca, at the front)

The Conquest of the Desert (Spanish: Conquista del desierto) was a military campaign directed mainly by General Julio Argentino Roca in the 1870s, which established Argentine dominance over Patagonia, which was inhabited by indigenous peoples. The Conquest is commemorated on the 100 peso bill in Argentina.[1]

Jens Andermann has noted that contemporary sources on the campaign indicate that it was genocide by the Argentine government against the indigenous tribes.[2] Others perceive the campaign as intending to suppress specifically those groups of aboriginals that refused to submit to the law and carried out brutal attacks on civilian settlements.[3] This recent argument – usually summarized as "Civilization or Genocide?"[4]– questions whether the Conquest of the Desert was really intended to exterminate the aboriginals.

The arrival of the Spanish colonists on the shores of the Río de la Plata and the foundation of the city of Buenos Aires during the 16th century led directly to the first confrontations between the Spanish and the local aboriginal tribes, mainly the Pampas.

The Buenos Aires hinterland was acquired[clarification needed] from the aboriginals to be used for cattle raising, which also displaced most of the animals hunted by the aboriginal people. The natives responded by attacking the cities, killing their inhabitants and releasing/stealing cows and horses from the farms. In retaliation, the European colonists built fortresses and defended themselves from the frequent attacks.

The frontier dividing the colonial farms and the aboriginal territories moved outwards from Buenos Aires; at the end of the 18th century the Salado River became the limit between both civilizations. Many aboriginals were forced to abandon their tribes to work on the farms and mix with the white population; in this the way the gauchos were born.

After independence in 1816 there were many internal political conflicts between the provinces, but once settled there was an urgent drive to effectively occupy the lands claimed by the young republic, as well as increase the national production and by offering new lands to prospective immigrants.

In 1833 coordinated offensives by Juan Manuel de Rosas in Buenos Aires Province and other military leaders in the Cuyo region attempted to exterminate resistant tribes, but only Rosas had any success.

By this time Chile had founded Punta Arenas in Magellan Strait in 1845, which threatened the Argentine claims in Patagonia. Later in 1861 Chile began the occupation of the Araucanía which alarmed Argentine authorities because of Chile's growing influence in the zone. The now defeated Mapuches in Chile had strong ties to the nomadic tribes in the east side of the Andes, with whom they share the same language.

The decision of planning and executing the Conquest of the Desert was probably triggered by the 1872 attack of Calfucurá and his 6,000 followers on the cities of General Alvear, Veinticinco de Mayo and Nueve de Julio, where 300 criollos were killed, and 200,000 head of cattle taken.

The cattle stolen in the incursions (malones) would later be taken to Chile through the Rastrillada de los chilenos and traded for goods. There is evidence that Chilean authorities knew about this, and gave their consent, expecting to strengthen their influence over Patagonian territories they expected to eventually occupy in the future.[citation needed] 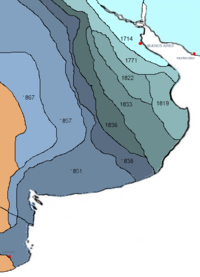 In 1875 Adolfo Alsina, Minister of War under President Nicolás Avellaneda, presented the government with a plan which he later described as aiming to populate the desert, and not to destroy the Indians.[5]

The first step was to connect Buenos Aires and the Fortines (fortresses) with telegraph lines. Then a peace treaty was signed with chieftain Juan José Catriel, only to be broken shortly after when he attacked, together with chieftain Namuncurá, Tres Arroyos, Tandil, Azul, and other towns and farms in an even bloodier attack than that of 1872.

Alsina answered by attacking the aboriginals, forcing them to fall back, and leaving fortines on his way south to protect the conquered territories. He also constructed the 374 km long trench named Zanja de Alsina ("Alsina's trench") that in theory would serve as a limit to the unconquered territories. With its three metre width and two metre depth, it served as an obstacle for the transport of cattle by the aboriginals.

The aboriginals continued taking cattle from farms in the Buenos Aires Province and south of the Mendoza Province, but found it difficult to escape as the animals slowed their march, and had to face the patrolling units that would follow them. As the war went on, some aboriginals eventually signed peace treaties and settled among the "christians" behind the lines of forts. Some tribes even allied with the Argentine government and either stood neutral or fought for the Argentine army. In return, they were granted periodical shipments of cattle and food. After Alsina died in 1877, Julio Argentino Roca was appointed Minister of War, and decided to change Alsina's strategy.

Julio Argentino Roca, in contrast to Alsina, believed that the only solution against the aboriginal threat was to extinguish, subdue or expel them.

Our self-respect as a virile people obliges us to put down as soon as possible, by reason or by force, this handful of savages who destroy our wealth and prevent us from definitely occupying, in the name of law, progress and our own security, the richest and most fertile lands of the Republic.
—Julio Argentino Roca, [6]

At the end of 1878 he started the first wave to "clean" the area between the Alsina trench and the Negro river by continuous and systematic attacks to the aboriginals' settlements.

With 6,000 soldiers armed with new breech-loading Remington rifles supplied by the United States, in 1879 he began the second wave reaching Choele Choel in two months, where the local aboriginals surrendered without resistance. From other points, southbound companies made their way down to the Negro River and the Neuquén River, a northern tributary of the Negro River. Together, both rivers marked the natural frontier from the Andes to the Atlantic Ocean.[7] This attack led to a large migration of Mapuches into the zone around Curarrehue and Pucón, Chile.

Roca followed Nicolás Avellaneda as president. He thought it was imperative to conquer the territory south of the Negro River as soon as possible, and ordered the 1881 campaign under the control of Colonel Conrado Villegas.

Within a year Villegas conquered the Neuquén Province (he reached the Limay River). The campaign continued to push the aboriginal resistance further south, to fight the last battle on October 18, 1884. The last rebel group of over 3,000 members under the command of chieftains Inacayal and Foyel surrendered two months later in present Chubut Province.