Cooling tower and water discharge of a nuclear power plant

Water cooling is a method of heat removal from components and industrial equipment. As opposed to air cooling, water is used as the heat conductor. Water cooling is commonly used for cooling automobile internal combustion engines and large industrial facilities such as steam electric power plants, hydroelectric generators, petroleum refineries and chemical plants.[1] Other uses include cooling the barrels of machine guns, cooling of lubricant oil in pumps; for cooling purposes in heat exchangers; cooling products from tanks or columns, and recently, cooling of various major components inside high-end personal computers. The main mechanism for water cooling is convective heat transfer.[citation needed]

For cooling CPU cores its primary advantage is that its tremendously increased ability to transport heat away from source to a secondary cooling surface allows for large, more optimally designed radiators rather than small, inefficient fins mounted directly on the heat source.

The water jacket around an engine is also very effective at deadening mechanical noises, which makes the engine quieter. However, the primary disadvantage is that it costs significantly more than an air-cooled engine system.[citation needed] 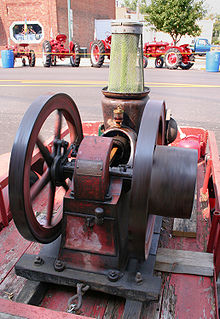 An antique gasoline engine with an evaporative cooler and mesh screen to improve evaporation. Water is pumped up to the top and flows down the screen to the tank.

An open water cooling system makes use of evaporative cooling, lowering the temperature of the remaining (unevaporated) water. This method was common in early internal combustion engines.

Open systems commonly use plain tap water, but this leads to mineral deposits forming in the cooling system, due to the water evaporating and leaving behind dissolved salts and minerals that were in the water. Eventually the scale buildup can lead to clogging of pipes and pumps, blocking water flow and leading to equipment failure. Typically scale can not be removed and requires complete replacement of clogged parts. The use of distilled water will prevent scale formation, but distilled water is expensive to use as an evaporative coolant.

For more details on this topic, see Engine cooling.

Modern automotive cooling systems are slightly pressurized. This raises the boiling-point of the coolant and reduces evaporation.[citation needed]

The use of water cooling carries the risk of damage from freezing. Automotive and many other engine cooling applications require the use of a water and antifreeze mixture to lower the freezing point to a temperature unlikely to be experienced. Antifreeze also inhibits corrosion from dissimilar metals and can increase the boiling point, allowing a wider range of water cooling temperatures. Its distinctive odor also alerts operators to cooling system leaks and problems that would go unnoticed in a water-only cooling system. The heated water can also be used to warm the air conditioning system inside the car, if so desired.[citation needed] 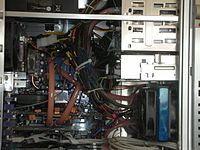 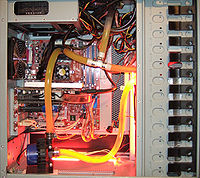 Cooling hot computer components with various fluids has been in use since at least as far back as the development of Cray-2 in 1982, using Fluorinert. Through the 1990s, water cooling for home PCs slowly gained recognition amongst enthusiasts, but it started to become noticeably more prevalent after the introduction of AMD's hot-running Athlon processor in mid 2000.[citation needed] As of 2011, there are several manufacturers of water cooling components and kits, and some custom computer retailers include various setups of water cooling for their high performance systems.

Water cooling can be used to cool many computer components, but especially the CPU. Water cooling usually uses a CPU water block, a water pump, and a heat exchanger (usually a radiator with a fan attached). Water cooling can allow quieter (potentially fanless) operation, or improved processor speeds (overclocking), or a balance of both. Less commonly, GPUs, Northbridges, Southbridges, hard disk drives, memory, voltage regulator modules (VRMs), and even power supplies can be water-cooled.[citation needed]

Water coolers for desktop computers were, until the end of the '90s, homemade. They were made from car radiators (or more commonly, a car's heater core), aquarium pumps and home-made water blocks, laboratory-grade PVC and silicone tubing and various reservoirs (home made using plastic bottles, or constructed using cylindrical acrylic or sheets of acrylic, usually clear) and or a T-Line. More recently a growing number of companies are manufacturing water-cooling components compact enough to fit inside a computer case. This, and the trend to CPUs of higher power dissipation, has greatly increased the popularity of water cooling, although only a very small minority of computers are water-cooled.[citation needed]

Dedicated overclockers occasionally use vapor-compression refrigeration or thermoelectric coolers in place of more common standard heat exchangers. Water cooling systems in which water is cooled directly by the evaporator coil of a phase change system are able to chill the circulating coolant below the ambient air temperature (impossible with a standard heat exchanger) and, as a result, generally provide superior cooling of the computer's heat-generating components. The downside of phase-change or thermoelectric cooling is that it uses much more electricity, and antifreeze must be added due to the low temperature. Additionally, insulation, usually in the form of lagging around water pipes and neoprene pads around the components to be cooled, must be used in order to prevent damage caused by condensation of water vapour from the air on chilled surfaces. Common places from which to borrow the required phase change systems are a household dehumidifier or air conditioner.[citation needed]

An alternative cooling system, which enables components to be cooled below the ambient temperature, but which obviates the requirement for antifreeze and lagged pipes, is to place a thermoelectric device (commonly referred to as a 'Peltier junction' or 'pelt' after Jean Peltier, who documented the effect) between the heat-generating component and the water block. Because the only sub-ambient temperature zone now is at the interface with the heat-generating component itself, insulation is required only in that localized area. The disadvantage to such a system is that pelts typically dissipate a lot of power, and the water cooling system must remove this heat in addition to that generated by the component.[citation needed]

Another possible danger is damaging condensation, due to the ambient air right around the pelt being cold. A proper installation requires that the Peltier be "potted" with silicone epoxy. The epoxy is applied around the edges of the device, preventing air from entering or leaving the interior.[citation needed]

Industrial cooling towers may use river water, coastal water (seawater) or well water as their source of fresh cooling water. The large mechanical induced-draft or forced-draft cooling towers in industrial plants continuously circulate cooling water through heat exchangers and other equipment where the water absorbs heat. That heat is then rejected to the atmosphere by the partial evaporation of the water in cooling towers where upflowing air is contacted with the circulating downflow of water. The loss of evaporated water into the air exhausted to the atmosphere is replaced by "make-up" fresh river water or fresh cooling water. Since the evaporation of pure water is replaced by make-up water containing carbonates and other dissolved salts, a portion of the circulating water is also continuously discarded as "blowdown" water to prevent the excessive build-up of salts in the circulating water.[3]

Some nuclear reactors use heavy water as cooling. Heavy water is employed in nuclear reactors because it is a weaker neutron absorber. This allows for the use of less enriched fuel. For the main cooling system, normal water is preferably employed through the use of a heat exchanger as heavy water is much more expensive. Reactors that use other materials for moderation (graphite) may also use normal water for cooling.

On very large rivers, but more often at coastal and estuarine sites, "direct cooled" systems are often used instead. These industrial plants do not use cooling towers and the atmosphere as a heat sink but put the waste heat to the river or coastal water instead. These once-through cooling (OTC) systems thus rely upon a good supply of river water or seawater for their cooling needs. The warmed water is returned directly to the aquatic environment, often at temperatures significantly above the ambient receiving water. Thermal pollution of rivers, estuaries and coastal waters is an issue which needs to be addressed when considering the siting of such plants.

Other impacts include "impingement" (the capture of larger organisms such as fish and shrimp on screens protecting the small bore tubes of the heat exchangers from blockage) and "entrainment" (the combined effects of temperature, pressure, biocide residual and turbulence/shear on smaller organisms entrained with the cooling water and then expelled back to the aquatic environment in the effluent).[4] The cooling water in such heat exchange cycles is often treated with a biocide to prevent fouling in heat exchangers like condensers and other equipment, but in some instances such control can be exercised instead through frequent cleaning, antifouling paints (both toxic-release and non-toxic), or heat treatment.[citation needed]