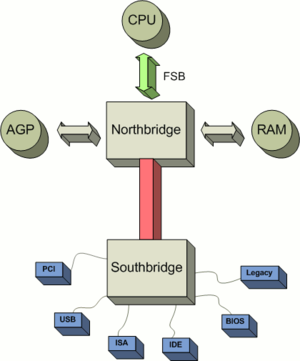 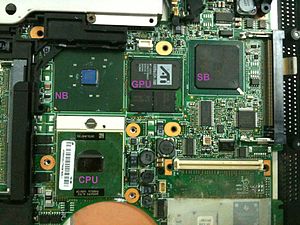 The northbridge has historically been one of the two chips in the core logic chipset on a PC motherboard, the other being the southbridge. Increasingly these functions have migrated to the CPU chip itself, beginning with memory and graphics controllers. For Intel Sandy Bridge and AMD Fusion processors introduced in 2011, all of the functions of the northbridge reside on the CPU.[1] When a separate northbridge is employed in older Intel systems it is named memory controller hub (MCH) or integrated memory controller hub (IMCH) if equipped with an integrated VGA.

Separating the different functions into the CPU, northbridge, and southbridge chips is due to the difficulty of integrating all components onto a single chip.[2] In some instances the northbridge and southbridge functions were combined onto one die when design complexity and fabrication processes permitted it, for example the Nvidia GeForce 320M in the 2009/2010 Macbook Air is a northbridge/southbridge/GPU combo chip.[3]

The northbridge typically handles communications among the CPU, in some cases RAM, and PCI Express (or AGP) video cards, and the southbridge.[4][5] Some northbridges also contain integrated video controllers, also known as a Graphics and Memory Controller Hub (GMCH) in Intel systems. Because different processors and RAM require different signaling, a given northbridge will typically work with only one or two classes of CPUs and generally only one type of RAM.

There are a few chipsets that support two types of RAM (generally these are available when there is a shift to a new standard). For example, the northbridge from the Nvidia nForce2 chipset will only work with Socket A processors combined with DDR SDRAM, the Intel i875 chipset will only work with systems using Pentium 4 processors or Celeron processors that have a clock speed greater than 1.3 GHz and utilize DDR SDRAM, and the Intel i915g chipset only works with the Intel Pentium 4 and the Celeron, but it can use DDR or DDR2 memory.

The name is derived from drawing the architecture in the fashion of a map. The CPU would be at the top of the map comparable to due north on most general purpose geographical maps. The CPU would be connected to the chipset via a fast bridge (the northbridge) located north of other system devices as drawn. The northbridge would then be connected to the rest of the chipset via a slow bridge (the southbridge) located south of other system devices as drawn. 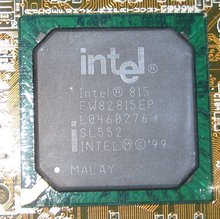 The overall trend in processor design has been to integrate more functions onto the chip which decreases overall motherboard cost and improves performance. The memory controller, which handles communication between the CPU and RAM, were moved onto the processor die by AMD beginning with their AMD64 processors and by Intel with their Nehalem processors. One of the advantages of having the memory controller integrated on the CPU die is to reduce latency from the CPU-to-Memory so the CPU can control the memory directly.

Another example of this kind of change is Nvidia's nForce3 chipset for AMD64 systems that is a single chip. It combines all of the features of a normal southbridge with an AGP port and connects directly to the CPU. On nForce4 boards they consider this to be an MCP (Media Communications Processor).

Intel's "Sandy Bridge" processors feature full integration of northbridge functions onto the CPU chip, along with processor cores, memory controller and graphics processing unit (GPU). This was a further evolution of the Westmere architecture, which also featured a CPU and GPU in the same package.[6]

AMD Fusion processors feature full integration of northbridge functions onto the CPU chip, along with processor cores, memory controller and graphics processing unit (GPU). This was an evolution of the AMD64, since the memory controller was integrated on the CPU die in the AMD64.

The northbridge plays an important part in how far a computer can be overclocked, as its frequency is commonly used as a baseline for the CPU to establish its own operating frequency. This chip typically gets hotter as processor speed becomes faster, requiring more cooling. There is a limit to CPU overclocking, as digital circuits are limited by physical factors such as propagation delay which increases with (among other factors) operating temperature; consequently most overclocking applications have software-imposed limits on the multiplier and external clock setting. See Overclocking