Andreas Nikolaus "Niki" Lauda (born February 22, 1949 in Vienna) is an Austrian former Formula One racing driver and three-time F1 World Champion. More recently an aviation entrepreneur, he has founded and run two airlines and was manager of the Jaguar Formula One racing team for two years.

Lauda became a racing driver despite his family's disapproval. After starting out with a Mini, Lauda moved on into Formula Vee, as was normal in Central Europe, but rapidly moved up to drive in private Porsche and Chevron sports cars. His career seemed to be going nowhere in particular until he took out a large bank loan, secured by a life insurance policy, to buy his way into the fledgling March team as a Formula 2 (F2) driver in 1971. He was quickly promoted to the F1 team and drove for March in both F1 and F2 in 1972. Although the F2 cars were good (and Lauda's test-driving skills impressed March principal Robin Herd), March's 1972 F1 season was catastrophic and Lauda, in despair and deep debt, briefly contemplated suicide but finally took out yet another bank loan to buy his way into the BRM team in 1973. Lauda was instantly quick but the team was in decline; his big break came when his BRM team-mate Clay Regazzoni rejoined Ferrari in 1974 and team owner Enzo Ferrari asked him what he thought of Lauda. Regazzoni spoke favourably of Lauda, so Ferrari promptly went and signed him, paying Niki enough to clear his debts.

After an unsuccessful start to the 1970s culminating in a disastrous start to the 1973 season, Ferrari regrouped completely under Luca di Montezemolo and were resurgent in 1974. The team's faith in the little-known Lauda was quickly rewarded by a second-place finish in his début race for the team, the season-opening Argentine Grand Prix. His first Grand Prix (GP) victory – and the first for Ferrari since 1972 – followed only three races later in Spain. Although Lauda became the season's pacesetter, achieving six consecutive pole positions, a mixture of inexperience and mechanical unreliability meant Lauda won only one more race that year, the Dutch GP. He finished fourth in the Drivers' Championship and demonstrated immense commitment to testing and improving the car.

The 1975 F1 season started slowly for Lauda, but after nothing better than a fifth-place finish in the first four races he then won four out of the next five races in the new Ferrari 312T. His first World Championship was confirmed with a fifth win at the last race of the year, the United States GP. He also became the first and only driver to lap the Nürburgring Nordschleife in under 7 minutes, which was considered a huge feat as the Nordschleife section of the Nürburgring was 2 miles longer than it is today.

Unlike 1975, Lauda dominated the start of the 1976 F1 season, winning four of the first six races and finishing second in the other two. By the time of his fifth win of the year at the British GP, he had more than double the points of his closest challengers Jody Scheckter and James Hunt, and a second consecutive World Championship appeared a formality. It would be a feat not achieved since Jack Brabham's victories in 1959 and 1960. He also looked set to win the most races in a season, a record held by the late Jim Clark since 1963. 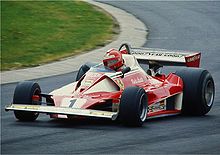 A week before the 1976 German Grand Prix at the fearsome Nürburgring, (even though he was the fastest driver on the circuit at that time) Lauda tried to boycott the circuit, largely due to the safety arrangements. Most of the other drivers voted against it and the race went ahead. On the second lap at the very fast left kink before Bergwerk, Lauda's Ferrari swerved off the track, due to a suspected rear suspension failure, hit an embankment and rolled back into the path of Brett Lunger's Surtees-Ford car. Lauda's Ferrari burst into flames, but, unlike Lunger, he was trapped in the wreckage. Drivers Arturo Merzario, Brett Lunger, Guy Edwards and Harald Ertl arrived at the scene a few moments later, but before they were able to pull Lauda from his car, he suffered severe burns to his head and inhaled hot toxic gases that damaged his lungs and blood. Although Lauda was conscious and able to stand immediately after the accident, he later lapsed into a coma.[7]

Lauda suffered extensive scarring from the burns, which became possibly his most famous attribute in the eyes of the public. He only had enough reconstructive surgery to get his eyelids to work properly, but never felt a need to do any more. His right ear is mostly gone. Since the accident he has always worn a cap to cover the scars on his head. He has arranged for sponsors to use the cap for advertising.

With Lauda out of the contest, Ferrari boycotted the Austrian GP in protest at what they saw as preferential treatment shown towards McLaren driver James Hunt at the Spanish and British GPs. Carlos Reutemann was even taken on as a potential replacement.

Lauda returned to race only six weeks (two races) later, finishing fourth in the Italian GP. In Lauda's absence, Hunt had reduced his lead in the World Championship standings. Following wins in the Canadian and United States GPs, Hunt stood only three points behind Lauda before the final race of the season, the Japanese GP.

Lauda qualified third, one place behind Hunt, but on race day there was torrential rain and Lauda retired after 2 laps, stating that he felt it was unsafe to continue under these conditions. Hunt led much of the race before a late puncture dropped him down the order. He recovered to 3rd, thus winning the title by a single point. In spite of this, Lauda's move is seen as one of the bravest examples in motor racing.

Lauda's previously good relationship with Ferrari was severely affected by his decision to withdraw from the race, and he endured a difficult 1977 season, despite easily winning the championship through consistency rather than outright pace. Having announced his decision to quit Ferrari at season's end, Lauda left early due to the team's decision to run the then unknown Gilles Villeneuve in a third car at the Canadian Grand Prix.

Having joined Brabham in 1978 for a $1 million salary, Lauda endured two unsuccessful seasons, notable mainly for his one race in the Brabham BT46B, a radical design known as the Fan Car: it won its first race, but Brabham did not use the car in F1 again, not wanting the car to be banned outright. At the 1979 Canadian Grand Prix, Lauda informed Brabham owner Bernie Ecclestone that he wished to retire immediately, as he had no more desire to "drive around in circles". Lauda, who had founded a charter airline, returned to Austria to run the company full-time.

Needing money to shore up his new business, in 1982 Lauda returned to racing, feeling that he still had a career in Formula One. After a successful test with McLaren, the only problem was in convincing then team sponsor Marlboro that he was still capable of winning. Lauda proved he was still quite capable when, in his third race back, he won the Long Beach Grand Prix. Lauda won a third world championship in 1984 by half a point over teammate Alain Prost, due to only half points being awarded for the shortened 1984 Monaco Grand Prix. His Austrian Grand Prix victory that year is the most recent and so far only time an Austrian has won his home Grand Prix.

1985 was a poor season for Lauda, with eleven retirements from the fourteen races he started, he did not start the Belgian Grand Prix at Spa-Francorchamps after crashing and breaking his wrist during practice, he also later missed the European Grand Prix at Brands Hatch; John Watson replaced him for that race. He did manage 4th at the San Marino Grand Prix, 5th at the German Grand Prix, and a single race win at the Dutch Grand Prix. This proved to be his last Grand Prix victory and also the last Formula One Grand Prix held in the Netherlands. He retired for good at the end of that season.

Lauda's helmet originally was a plain red helmet with his full name written on the sides and the Raffeisen Bank logo in the chin area. Some years later, his helmet became red with the Lauda Air's logo white and with a White ring on the top.

Lauda returned to running his airline, Lauda Air, on his second Formula One retirement in 1985. During his time as airline manager, he was appointed consultant at Ferrari as part of an effort by Montezemolo to rejuvenate the team.[8] Ousted from his airline by boardroom politics after a sale to majority partner Austrian Airlines in 1999, he managed the Jaguar Formula One racing team from 2001 to 2002. In late 2003, he started a new airline, Niki. Lauda holds a commercial pilot's license and from time to time acts as a captain on the flights of his airline.

He was inducted into the International Motorsports Hall of Fame in 1993 and since 1996 has provided commentary on Grands Prix for Austrian and German television on RTL. He was, however, rapped for calling Robert Kubica a "polack" on air in May 2010 at the Monaco Grand Prix.[9][10]

Niki Lauda has written five books: The Art and Science of Grand Prix Driving (titled Formula 1: The Art and Technicalities of Grand Prix Driving in some markets) (1975); My Years With Ferrari (1978); The New Formula One: A Turbo Age (1984); Meine Story (titled To Hell and Back in some markets) (1986); Das dritte Leben (1996).[11] Lauda credits Austrian journalist Herbert Volker with editing the books.

Lauda is sometimes known by the nickname "the rat", "SuperRat" or "King Rat" because of his prominent bucked teeth. He has been associated with both Parmalat and Viessmann, sponsoring his ever faithful 'cappy' from 1976 onwards, used to hide the severe burns he sustained in his 1976 accident. Lauda admitted in a 2009 interview with the German newspaper Die Zeit that an advertiser currently pays €1.2m for the space on his famous red cap.[12]

In 2008, American sports television network ESPN ranked him 22nd on their top drivers of all-time.[13] In 2005 the Austrian post office issued a stamp honouring him.[14]

Lauda had two sons with his first wife, Marlene: Mathias, a racing driver himself, and Lukas, his brother's manager. They divorced in 1991. He also has an illegitimate son, Christoph. In 2008 he married Birgit, who was 30 years his junior and was formerly a stewardess for his airline. She had also donated a kidney to Lauda when the kidney he received in a transplant from his brother years earlier failed. In September 2009 Birgit gave birth to twins, a boy and a girl.[15]