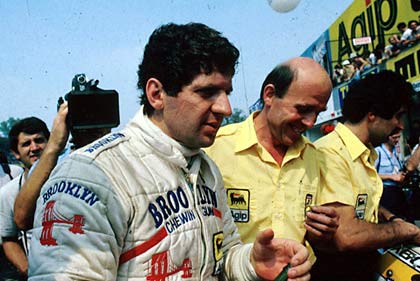 Scheckter was born in East London, and educated at .

He rapidly ascended to the ranks of Formula One after moving to Britain in 1970. He debuted in Formula One at Watkins Glen in 1972 with McLaren and ran as high as 3rd place before spinning and finishing 9th. Immediately becoming a name to watch, he continued his development the following year, winning the championship and racing 5 times in F1. In , he almost won in his third start in F1 before crashing into . In his next start, the British Grand Prix at Silverstone, Scheckter was involved in a big accident which took nearly a dozen cars out of the race, an incident which in many ways summed up his early career. Scheckter's bore the number zero during the American and Canadian Grands Prix of 1973. Scheckter is one of only two F1 drivers to compete under this number, the other being .
Tyrrell in 1974 gave him his first full-time drive in F1. Jody rewarded them with a 3rd place finish in the drivers' championship and a pair of wins in Sweden and Britain. During the year, he scored points in 8 consecutive races, one of the longer streaks of the time. A slight off-year followed, although he did become the only South African to win the , but his third year with the team in 1976 gave him another 3rd place finish in the driver's championship. In that season, Tyrrell introduced the most radical car in F1 history, the six-wheeled . Scheckter gave the six-wheeler its only win on Sweden's Anderstorp circuit and in his 12 races with the car, he scored points 10 times. This included a thrilling race-long battle for the lead in the between himself and his great friend .

Scheckter left for Walter Wolf's new team in 1977 and Scheckter gave the team a win in its maiden race. He won twice more with the team and was commonly on the podium when he finished, but finished 2nd behind a more dominant in points. A 7th place finish with the team in 1978 followed and he left the team after the season to join Ferrari to partner in the team's ground effect 312T4 car.

Critics felt he would not get along well with management at Ferrari, but he far surpassed expectations and helped give F1's most recognizable team another constructors' championship, while Scheckter's consistent finishes, with three wins among them, gave him the driver's championship in 1979 [cite web|url=http://www.formula1.com/teams_and_drivers/hall_of_fame/283/|publisher=|Fédération Internationale de l'Automobile|FIA|title=F1 Teams & Drivers Hall of Fame: Jody Schekter|accessdate=2007-10-24] . However, he struggled very badly in his 1980 title defense, even failing to qualify for one race. After only managing 2 points, Scheckter retired from the team and the sport.

Scheckter was the last driver to win a driver's championship for Ferrari until did so 21 years later. After Scheckter's retirement, he founded , a company which built firearms training simulators for military, law enforcement and security organizations. The sale of the company provided funds to allow Scheckter to help the racing careers of his sons Tomas and Toby. Tomas races in the and held pole position for the 2003 . Scheckter's brother, Ian, also raced in F1 for a few years.

In 2004 Scheckter was reunited with his championship-winning Ferrari at the South African two-seater F1x2 Charity Grand Prix at in South Africa.

Scheckter was a guest commentator for ITV during the , replacing .