Hulme went on to race for McLaren in Formula One, the Canadian-American Challenge Cup series (for Group 7 sports cars), and at Indianapolis. He was CanAm champion in 1968 (driving the McLaren M8A) and 1970 (driving the McLaren M8D "Batmobile"). He drove the McLaren M8F in 1971; teammate Peter Revson won the CanAm championship that year. Hulme and Revson drove the McLaren M20 in the 1972 CanAm races, but the M20 was overpowered by Roger Penske's Porsche 917s (driven by Mark Donohue and George Follmer). Hulme retired from Formula One at the end of the 1974 season but continued to race Australian Touring Cars. Hulme's death, caused by a heart attack whilst driving a BMW M3 during the Bathurst 1000, made him the first former Formula One champion to die of natural causes.

He was born and raised on a tobacco farm belonging to his parents in Motueka in the South Island of New Zealand. His father Clive Hulme was awarded a Victoria Cross while fighting in the Battle of Crete in 1941.

Denny Hulme left school and went to work in a garage. He saved up enough money to buy an MG TF, promptly entering this in hillclimbing events. After making impressive progress he purchased a Cooper-Climax, subsequently being chosen for the New Zealand driver to Europe program. Once there, he worked as a mechanic in Jack Brabham's garage in Chessington and began to pave his way on his motor-racing path.

In 1961 he appeared at Le Mans for the Abarth team, before Ken Tyrrell invited the likable (but sometimes gruff) New Zealander to race in his Formula 2 team. After some impressive performances there, it was his old boss Jack Brabham who gave Hulme the call and he joined the Australian legend's F2 team. The pair set about dominating the Championship that year, resulting in a one–two finish in the European Championship.

After making numerous appearances in non-championship events for Brabham, Denny finally got the call he had been waiting for, making his World Championship debut in 1965 at Monaco. Later that year, he scored his first points, for fourth position at the daunting Clermont-Ferrand (Charade) circuit in France.

1966 was Hulme's first full season of Formula One. Now, after the departure of Dan Gurney, he was the outright number two at Brabham behind Jack himself. Finishing a fine fourth that year, the highlights came. A third place at Reims in France, a second behind Brabham at Brands Hatch, and the fastest lap at Zandvoort, before ignition problems put paid to his race there.

The 1967 Championship was essentially an internal affair within the Brabham team for most of the year, but the new Lotus 49 gave Jim Clark and Graham Hill the opportunity to bite back. But two wins in the 11-race Championship, at Monte Carlo and the ferocious Nürburgring (the Green Hell), and a series of strong points finishes, gave Hulme the advantage. He won the Championship by five points from Brabham, and a further five from Jim Clark. Hulme was the first (and to date, only) Formula One World Champion from New Zealand.

1968 saw a move to the McLaren team, owned by fellow Kiwi Bruce McLaren. The South African race, held at the legendary Kyalami circuit, proved difficult for the team. Despite having to use the old BRM V12 engines on an old M5A chassis, Denny brought it home a creditable fifth.

By the Spanish round at Jarama, the awesome Cosworth V8 engine was installed in the brand new M7A chassis and the good times rolled. At the Spanish round Hulme picked up second before taking two more wins that year at Monza and in Canada, leaving him with an outside chance of retaining the Championship crown against Graham Hill and the young Jackie Stewart.

The finale, in Mexico City, determined the champion that year—but unfortunately for Denny he was robbed by a suspension failure on his McLaren.

1969 was a disaster for Hulme: the revised M7A chassis struggled with reliability and Hulme managed only 20 points, attaining one victory—ironically, in light of the previous season's events, at the final round in Mexico. Hulme ended the season in sixth position in the drivers' standings.

1970 brought a new decade, but Hulme's luck didn't change. Team boss and great friend Bruce McLaren was killed whilst testing the CanAm McLaren M8D, which affected Denny. Another problem occurred that year when he suffered burns to his hands from a methanol fire during practice for the Indianapolis 500. As a result, he missed the Dutch Grand Prix in 1970. Undeterred, he still managed a creditable fourth in the championship with 27 points.

1971 started with a bang. At Kyalami, he led dominantly—but the rising-rate suspension system forced him out, after only a few laps. The McLaren team were in disarray. Hulme set the fastest laps in Canada and the United States that year—but results were hard to come by. Denny ended up ninth in the standings for 1971.

Beauty, fragrance and men's products company Yardley took over title sponsorship of a new McLaren in 1972, and it paid dividends for Denny. Partnered with good friend Peter Revson, Denny was back on winning ways taking victory in South Africa, and a few fine podiums elsewhere, finishing 1972 in third place with 39 points.

Amazingly, Hulme scored only one pole position in his F1 career, in 1973 at Kyalami—he appeared to have a good relationship with the South African venue. However, Hulme was outshone by friend and team-mate Peter Revson in 1973, and he finished a place down on the American in sixth, 12 points adrift.

He and Revson had built up a strong friendship off the back of their F1 comraderie—they also competed together in the Can-Am series. When Revson left McLaren at the end of 1973 to join Shadow, Hulme would have been disappointed.

After the Brazilian Grand Prix in which Denny finished in twelfth place, testing at Kyalami commenced. Revson lost control of his car, veering head-on into the barriers. Hulme tried in vain to save his friend's life, but to no avail. After the accident Hulme announced that he would see out 1974 before retiring from Grand Prix racing. However, other than winning the Argentine event and coming home second in Austria, he did not make much of an impact on the season, and he retired dignified at the end of the year. 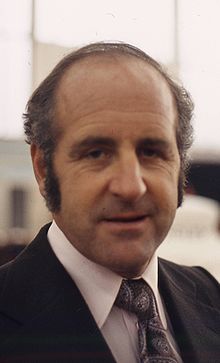 Hulme's debut season in the Cam-Am series heralded no points, but the year after, in the year of his F1 Championship win, he came home second in the series, behind team leader Bruce McLaren. Hulme's first Can-Am championship came his way in 1968, taking victories at Elkhart Lake, Edmonton and in Las Vegas and notching up 35 points. 1969 saw the McLaren team dominate the series; they won every race, with multiple 1–2 finishes, and even a 1–2–3 finish when Dan Gurney drove the spare M8B. Hulme scored five victories to eventually come home second again behind McLaren, this time on 160 points. In 1970, in difficult circumstances, he took his second Can-Am title, as the team mourned the loss of Bruce McLaren who had died while testing the new Can-Am car (the M8D) at Goodwood. Hulme took the championship with 132 points—more than double the number of second-placed Lothar Motschenbacher. In 1971 Hulme's teammate was his good friend Peter Revson. Revson took the Can-Am crown that year with Hulme in second. In his final Can-Am year, again teamed with Revson (both driving Mclaren M20s), he took a record 22nd series victory. Hulme ended up second in the competition with 65 points.

After leaving the sport, Hulme led the GPDA (Grand Prix Drivers' Association) for a brief period, but the cut and thrust nature of the post was ill-suited to his gentlemanly nature and he did not fill the post for very long. He then retired to New Zealand, returning to touring cars in the early 1980s, driving for the concern of the well-travelled Scot, Tom Walkinshaw, racing for his Austin Rover team in the European Touring Car Championship.

A favourite event of Hulme's was the Bathurst 1000, held at the famous Mount Panorama track in Australia. In the 1992 event he was driving a semi-works supported BMW M3 when after complaining over the car to pits radio of blurred vision (originally thought to be because of the heavy rain) Hulme suffered a massive heart attack at the wheel whilst driving along the high-speed Conrod Straight. After veering into the wall on the left side of the track at about 140 mph (230 km/h),[1] he managed to bring the car to a relatively controlled stop sliding against the safety railing and concrete wall on the right side of the track. When marshals reached the scene they found Hulme still strapped in. He was taken from the car straight to Bathurst Hospital where he was officially pronounced dead.

Before 1960 he was known for his preference for driving barefoot and it was not until 1960 that people convinced him to start racing with shoes on. His nickname at the time was "The Barefoot Boy From Te Puke". He was also known as "The Bear" due to the fact he could be irascible and even rude with those who rubbed him up the wrong way.