HMS Triumph (1903)
For other ships of the same name, see HMS Triumph.

HMS Triumph was a Swiftsure class pre-dreadnought battleship of the Royal Navy.

HMS Triumph was ordered by Chile as Libertad, laid down by Vickers at Barrow-in-Furness on 26 February 1902, and launched on 12 January 1903. Chile put her up for sale in early 1903; to prevent a possible purchase by Russia, the United Kingdom purchased her on 3 December 1903 and renamed her HMS Triumph on 7 December 1903. She was completed in June 1904.[5]

Triumph was a second-class battleship, lightly constructed, armed, and armoured by British standards, although she never suffered the problems with hull weakness that her sister ship HMS Swiftsure did. Chile had required her to fit into its graving dock at Talcahuano, so she had to be longer and narrower for her displacement than ships built to British standards. She had a noticeably foreign appearance, with taller, narrower funnels than standard on British battleships and a pair of heavy cranes amidships. Details in mast and anchor arrangements as well as the arrangement of magazines and shell-handling rooms also were different from British standards.[6]

Triumph and Swiftsure were the first British battleships since the Centurion class ships Centurion and Barfleur to mount a main battery of 10 inch (254 mm) guns and the last to do so. Triumph mounted the Mark VII 10-inch, while Swiftsure had the Mark VI. The ships followed the standard British pactice of the time of mounting the main battery in two double turrets, one forward and one aft. The Royal Navy believed that the 10 inch guns were too light to be effective against modern battleships—they could penetrate the armour of the latest German and Russian battleships, but not that of the better-armoured French battleships—but that they could be useful against foreign cruisers, although Triumph and Swiftsure were not fast enough to catch cruisers. They had a powerful secondary battery, being the only British battleships to mount 7.5 inch (190.5 mm) guns; these were of a different type than the 7.5 inch guns mounted on British cruisers. Ten of the 7.5 inch guns were mounted in a central battery on the main deck, where they were criticised for taking up too much deck space; the other four were in casemates abreast the fore- and mainmasts on the upper deck. The ships mounted 14-pounders, again a heavier battery than the 12-pounders of most British battleships, although in practice the 14-pounders proved no more effective.[7]

The armour of Triumph and Swiftsure compared favorably with that of the Duncan class battleships, but would not have stood up well against the main battery rounds of foreign first-class battleships. About the same percentage of their displacement was devoted to armour as in the Duncans, with much of its rearrangement from that of the Duncans having to do with most of the secondary guns being mounted in a central battery, rather than casemated as in the Duncan class.[8]

The Swiftsures had balanced rudders and an improved hull form, making them quite maneuverable.[2] They had the latest British boiler technology when built, and Triumph and Swiftsure were the fastest predreadnoughts ever built, with Triumph achieving 20.17 knots (37.35 km/h) on trials, although this was during a short sprint under ideal conditions. Operationally, Triumph and Swiftsure averaged a top speed of 19 knots (35 km/h), slightly faster than the battleships of the Duncan class, which was enough to make them the fastest predreadnoughts.[9]

Triumph and Swiftsure were the last British battleships to enter service with bow crests. They also were the last to be equipped with ventilation cowls.[10]

Purchased solely to deny her acquisition by other navies, Triumph met no outstanding Royal Navy requirement when purchased, did not match British standards in many ways, required the manufacturing of her own non-standard 10 inch (254 mm) ammunition, and was problematic for the British to employ, being too weakly armed and protected to face modern enemy battleships and too slow to catch enemy cruisers. Like all predreadnoughts, she was made obsolete by the revolutionary HMS Dreadnought and her successors from 1906. She nonetheless had a useful and eventful career, playing an active role in British operations on foreign stations during World War I until her loss.

HMS Triumph commissioned at Chatham Dockyard on 21 June 1904 for service in the Home Fleet. On 17 September 1904 she suffered slight damage to her side when the merchant steamer Pembroke Dock, Wales.[11]

Under a fleet reorganization in January 1905, the Home Fleet became the Channel Fleet, and Triumph became a Channel Fleet unit. She suffered another mishap when she collided with her sister ship Swiftsure on 3 June 1905, suffering damage to her bows.[11] 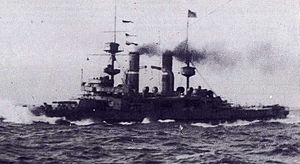 She was repaired at Chatham in June–July 1905. She was reduced to the commissioned reserve at Portsmouth Dockyard on 7 October 1908.[10]

Triumph underwent a refit at Chatham in October 1908, and on 6 April 1909 transferred to the Mediterranean Fleet. Under a fleet reorganization in May 1912, she transferred to the Third Fleet, Home Fleet, with a nucleus crew in reserve at Portsmouth.[11]

Triumph commissioned at Devonport Dockyard on 28 August 1913 to serve on the China Station. She went back into reserve, reduced to a nucleus crew, at Hong Kong.

Triumph returned to full commission at Hong Kong when World War I broke out in August 1914, bringing her crew up to strength by using the crews of demobilised river gunboats and two officers, 100 enlisted men, and six signallers from the Duke of Cornwall's Light Infantry. She was ready for sea on 6 August 1914.[11] 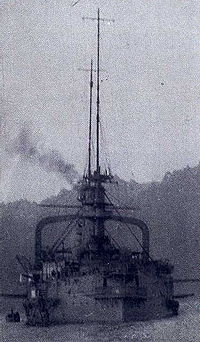 Triumph took part in operations against the Pacific Squadron of Maximilian Graf von Spee in early August 1914, capturing a German collier, the 4,900-ton German civilian ship Frisia, which was subsequently renamed Huntress in British service. On 23 August 1914, she was attached to the Imperial Japanese Navy's Second Fleet to participate in the campaign against the German colony at Tsingtao, China, and assisted in the capture of the fortress at Tsingtao on 7 November 1914. With Tsingtao in Japanese hands, Triumph returned to Hong Kong for a refit in November 1914.[12]

Triumph took part in the opening attack on the entrance forts on 18 February 1915 and 19 February 1915, and joined battleships HMS Albion and HMS Cornwallis in using her secondary battery to silence the fort at Sedd el Bahr on 25 February 1915. She, Albion, and HMS Majestic were the first Allied battleships to enter the Turkish Straits during the campaign when they carried out the initial attack on the inner forts on 26 February 1915. She also took part in the attack on Fort Dardanos on 2 March 1915.[13] She and Swiftsure were detached from the Dardanelles on 5 March 1915 for operations against forts at Smyrna, returning to the Dardanelles on 9 March 1915.[11]

Triumph participated in the main attack on the Narrows forts on 18 March 1915, and carried out experimental firing on Ottoman Turkish trenches at Achi Baba on 15 April 1915. On 18 April 1915, one of her picket boats and one from Majestic torpedoed and sank the British submarine HMS E15, which had run aground near Fort Dardanos and was in danger of being captured by Ottoman forces. Triumph supported the main landing by the Anzac forces at Gaba Tepe on 25 April 1915, and supported the Anzacs there during a strong Turkish attack on 19 May 1915.[13]

On 25 May 1915, Triumph was underway off Gaba Tepe, firing on Ottoman positions, with torpedo nets out, guns manned, and most watertight doors shut, when she sighted a submarine periscope 300 to 400 yards (370 m) off her starboard beam at about 1230 hours. It belonged to the U-boat U-21, commanded by Otto Hersing, which had just arrived in the area[14]. All watertight doors were shut, and she opened fire on the periscope, but was almost immediately struck by a torpedo, which cut through her torpedo nets with ease, on her starboard side. A tremendous explosion resulted, and Triumph listed 10 degrees to starboard. She held that list for about five minutes, then her list increased to 30 degrees. Destroyer edit] Notes