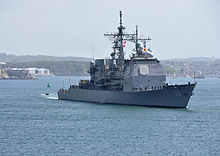 Her Majesty's Naval Base (HMNB) Devonport (HMS Drake), is one of three operating bases in the United Kingdom for the Royal Navy (the others being HMNB Clyde and HMNB Portsmouth). HMNB Devonport is located in Devonport, in the west of the city of Plymouth in Devon, England. It is the largest naval base in Western Europe[2] and is the sole nuclear repair and refuelling facility for the Royal Navy. The collocated Royal Dockyard is owned and operated by the Marine division of Babcock International Group (BM), who took over the previous owner Devonport Management Limited (DML) in 2007. The BM operation is commonly called Devonport Royal Dockyard.

In 2006 the Ministry of Defence announced that a review would be undertaken to examine the future of the three naval bases. The Naval Base Review was seeking to examine the long term future needs of the Royal Navy, with the most likely outcome being either retaining the three current naval bases, but with reduced capacity in each, or closing one of the two on the south coast of England. The results of the review, released in 2007, have stipulated no base closures.

HM Naval Base Devonport is the home port of the Devonport Flotilla which includes the largest ship in the Royal Navy HMS Ocean and the Trafalgar-class submarines.

In 1588, the ships of the English Navy set sail for the Spanish Armada through the mouth of the River Plym, thereby establishing the military presence in Plymouth. Sir Francis Drake is now an enduring legacy in Devonport, as the naval base has been named HMS Drake.[3]

In 1689 Prince William of Orange became William III and almost immediately he required the building of a new dockyard. The town of Plymouth he dismissed as inadequate. Edmund Dummer a Naval Officer travelled the West Country searching for an area where a dockyard could be built; he sent in two estimates for sites, one in Plymouth, Cattewater and one further along the coast, on the Hamoaze, a section of the River Tamar, in the parish of Stoke Damerel. On 30 December 1690, a contract was let for a dockyard to be built in the Hamoaze area, which was the start of the Devonport Royal Dockyards.[4]

At Devonport, Dummer was the designer of the first successful stepped stone dry dock in Europe.[5] Previously the Navy Board had relied upon timber as the major building material, which resulted in high maintenance costs and was also a fire risk. The docks Dummer designed were stronger with more secure foundations and stepped sides that made it easier for men to work beneath the hull of a docked vessel. These innovations also allowed rapid erection of staging and greater workforce mobility. He discarded the earlier three-sectioned hinged gate, which was labour intensive in operation, and replaced it with the simpler and more mobile two-sectioned gate. He wished to ensure that naval dockyards were efficient working units that maximized available space, as evidenced by the simplicity of his design layout for Devonport (which then was known as Plymouth Dock, not to be confused with the nearby town of Plymouth). He introduced a centralized storage area and a logical positioning of buildings, and his double rope-house combined the previously separate tasks of spinning and laying while allowing the upper floor to be used for the repair of sails.[6] 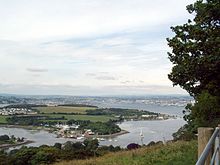 Devonport Dockyard and the Hamoaze from the Rame Peninsula, Cornwall.

The Royal Navy Dockyard consists of 14 dry docks (Docks Numbered 1 to 15, but there is no 13 Dock) [2], four miles (6 km) of waterfront, 25 tidal berths, five basins and an area of 650 acres (2.6 km²). It is the base for the Trafalgar-class nuclear powered hunter killer submarines and the main refitting base for all Royal Navy nuclear submarines. Work was completed by Carillion in 2002 to build a refitting dock to support the Vanguard-class Trident missile nuclear ballistic missile submarines.

Locals and tourists have long been able to visit the Dockyard during "Navy Days", a two day event where visitors can tour the facility, go aboard active naval ships and watch various displays of naval prowess. Among the most popular attractions is the visitor attraction, the nuclear powered submarine HMS Courageous, used in the Falklands War.

Devonport serves as headquarters for the Flag Officer Sea Training, which is responsible for the training of all the ships of the Navy and Royal Fleet Auxiliary, along with many from foreign naval services.

Plymouth Naval Base Museum is a maritime museum under development at Devonport.[7]

The Naval base at Devonport is nicknamed "Guz" by naval ratings. One suggestion is that this originates from the word guzzle (to eat or drink greedily), which is likely to refer to the eating of cream teas, a West Country delicacy and, therefore, one with strong connections to the area around Plymouth [8] Another explanation advanced is that "GUZZ" was the call sign for the nearby Royal Navy wireless station,(which was GZX), at Devil's Point,[9] though this has been disputed.[10]

Devonport has been the site of a number of leaks of nuclear waste associated with the nuclear submarines based there.

Ships based at the port are known as the Devonport Flotilla. This includes the Navy's assault ships HMS Ocean, HMS Albion and HMS Bulwark. It also serves as home port to most of the hydrographic surveying fleet of the Royal Navy and a substantial number of Type 22 and Type 23 frigates, the former are being retired in 2011 due to defence economies. The previous Commodore of the Devonport Flotilla was Commodore Peter Walpole ADC who assumed command in September 2005.[15]As of February 2011, it is commanded by Commodore JS Chick. Important Royal Navy Staff such as Commodore JML Kingwell, Commander UK (Response Force) Task Group, are based there.[16]

Other ships based at Devonport

Other units based at Devonport

Navy Days happens once every two years when for two days at the end of the summer a large part of Devonport Dockyard is open to the general public. There is an opportunity to view the facilities at the naval base as well as a number of Royal Navy and allied naval vessels present. There are a large number of stands and displays present which provide of information on some of the less well known aspects of the Royal Navy, for example the Royal Navy submarine rescue service.