Lemonade
This article is about the drink made with lemons. For other uses, see Lemonade (disambiguation). 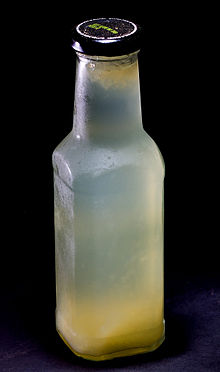 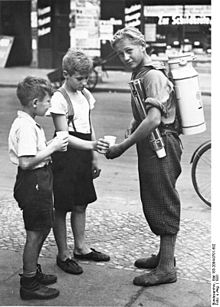 Selling lemonade in Germany during 1931

Lemonade is a lemon-flavored drink, typically made from lemons, water and sugar.

The term can refer to three different types of beverage:

The French word limonade, which originally meant an unsweetened lemon-flavored water or carbonated soda, has since come to mean "soft drink", regardless of flavor, in many countries.

In the Republic of Ireland, lemonade refers to the carbonated, lemon-flavored soft drink (as in the UK) but is further sub-divided into white (clear) lemonade and red lemonade. White lemonade equates to the colourless fizzy lemonade common in many countries, while red lemonade is particular to Ireland. Red lemonade differs slightly in taste from white lemonade and is either drunk neat or as part of a whiskey mixer.

American-style lemonade exists in the UK as a "homemade" juice (also called lemonade), but is only rarely sold commercially under that name. A carbonated version is commonly sold commercially as "cloudy" or "traditional" lemonade. There are also similar uncarbonated products, lemon squash and lemon barley water, both of which are usually sold as a syrup which is diluted to taste. Traditional lemonade also comes in powder packages. Variations on this form of lemonade can be found worldwide. In India and Pakistan, where it is commonly known as limbu paani or nimbu paani, lemonade may also contain salt and/or ginger juice. Shikanjvi is a traditional lemonade from the India-Pakistan region and can also be flavored with saffron, garlic and cumin.

In Australia and New Zealand, lemonade can also refer to any clear, carbonated soft drink with a primarily lemon flavor; e.g. a lemon-lime soft drink, such as Sprite. Culturally however, with a drink such as Sprite, the flavor is not recognised as "lemon-lime", but just plain "lemonade", although it is still the same flavor as its international counterpart. Other colored (and flavored) soft drinks are sometimes referred to by their color such as "red lemonade" or "green lemonade", implying that "lemonade" is the clear version of its "flavored" counterparts. 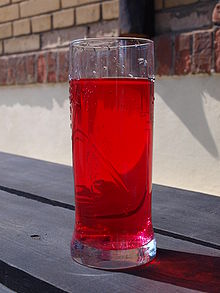 Pink lemonade from the Czech Republic

Pink lemonade has been colored with pink food coloring and is sometimes made sweeter. Sometimes artificial flavors and colors are used. Natural sources of the pink color, which may also affect taste, include grenadine,[1] cherry juice, red grapefruit juice, grape juice, cranberry juice, strawberry juice, pomegranate juice or other juices. It is a common misconception that the juice from the pink-fleshed Eureka lemon is used to make pink lemonade; although often planted in yards as an ornamental, the juice is clear and typically too sour to drink.

The New York Times credited Henry E. "Sanchez" Allott as the inventor of pink lemonade in his obituary:

At 15 he ran away with a circus and worked in lemonade concession. One day while mixing a tub of the orthodox yellow kind he dropped some red cinnamon candies in by mistake. The resulting rose-tinted mixture sold so surprisingly well that he continued to dispense his chance discovery.[2]

Another theory, as recorded by historian Joe Nickell, is that it was Pete Conklin who first invented the drink in 1857 when he used water dyed pink from a horse rider's red tights to make his lemonade.[3] 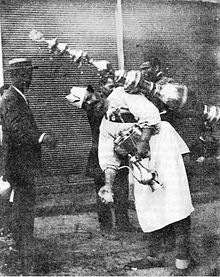 In the US, lemonade is usually sold as a summer refresher. It is commonly available at fairs and festivals, known in some regions as a "lemon shakeup", with the shell of the squeezed lemon left in the cup.[4] Lemonade was also the traditional mixer in a Tom Collins, but today it is commonly replaced by a bar mix.

Many children start lemonade stands in Canadian and US neighborhoods to make money in the summer months. The concept has become iconic of youthful summertime Americana to the degree that many parodies and variations on the concept exist in a wide variety of media. The computer game Lemonade Stand, created in 1979, simulates this business by letting players make various decisions surrounding a virtual stand. Some unlicensed lemonade stands have run afoul of health regulations.[5]

"Cloudy" lemonade made with hot water, infused with mint, and sweetened with honey is a common folk remedy for sore throat in the Middle East.[citation needed]

There are three methods commonly used in the US and Canada to prepare lemonade. 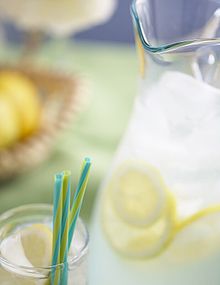 Lemonade in pitcher and glass