Del's is a brand of frozen lemonade, typically found in Rhode Island and southeastern Massachusetts during the summer months. Del's is now in 36 states, and has even gone international. Frozen lemonade is often compared with Italian ice or slush. It is made from crushed ice, lemons, and sugar. In Rhode Island and southeastern Massachusetts "Del's" is considered a genericized trademark.

Del's founder Angelo DeLucia originally got his recipe for Del's lemonade from his father, Franco DeLucia, who brought the recipe to the United States from Italy. Angelo then tried to find a way to make a machine to produce the beverage, a task he accomplished.

The first Del's stand was a small, pushable cart in Cranston, Rhode Island, during 1948. Soon after, he started using the "Del's Trucks" to serve the beverage anywhere in the state. The company still uses the trucks today in addition to its storefront locations. 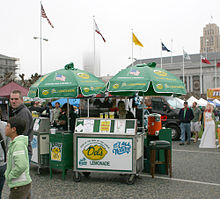 There are seven flavors of the popular drink: lemon, lite lemon, watermelon, peach-mango, and cherry. Coffee was once served as a flavor but has not appeared on the menu for many years.

Del's also sells other various products such as warm pretzels.

Most recently, the blueberry flavor was added to the selection, and in Rhode Island, Del's offers ruby red grapefruit, pomegranate, pineapple guava as well as a zero-calorie version of the soft frozen lemonade[2].

Del's operates franchises selling their prepared product, with 20 locations in Rhode Island, the most of any state, as well as locations throughout the US, and even internationally. Trucks selling the product are often seen at popular beach locations in summer months. The Del's "take-home" mix and non-frozen variety of lemonade can be found in grocery stores throughout the world.