Nose art
Not to be confused with nose-jewels or nose piercing.

Count Francesco Baracca and his SPAD S.VII, with the cavallino rampante that inspired the Ferrari emblem.

Nose art is a decorative painting or design on the fuselage of a military aircraft, usually located near the nose, and is a form of aircraft graffiti.

While begun for practical reasons of identifying friendly units, the practice evolved to express the individuality often constrained by the uniformity of the military, to evoke memories of home and peacetime life, and as a kind of psychological protection against the stresses of war and the probability of death. The appeal, in part, came from nose art not being officially approved, even when the regulations against it were not enforced.[1][2]

Because of its individual and unofficial nature, it is considered folk art, inseparable from work as well as representative of a group.[1] It can also be compared to sophisticated graffiti. In both cases, the artist is often anonymous, and the art itself is ephemeral. In addition, it relies on materials immediately available.[1]

Nose art is largely a military tradition, but civilian airliners operated by the Virgin Group feature "Virgin Girls" on the nose as part of their livery. In a broad sense, the tail art of several airlines such as the Eskimo of Alaska Airlines, can be called "nose art", as are the tail markings of present-day U.S. Navy squadrons. There were exceptions, including 8th Air Force B-17 "Whizzer", which had its girl-riding-a-bomb on the dorsal fin. 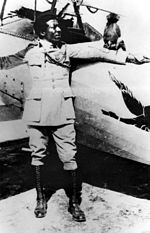 The practice of putting personalized decorations on fighting aircraft originated with Italian and German pilots. The first recorded piece of nose art was a sea monster painted on the nose of an Italian flying boat in 1913. This was followed by the popular practice of painting mouths underneath the propeller spinner, initiated by German pilots in World War I. The cavallino rampante (prancing horse) of the Italian ace Francesco Baracca was another well-known symbol, as was the red-painted aircraft of Manfred von Richthofen. However, nose art of this era was often conceived and produced by the aircraft ground crews, not by the pilots.

Other World War I examples included the "Hat in the Ring" of the American 94th Aero Squadron (attributed to Lt. Johnny Wentworth)[3] and the "Kicking Mule" of the 95th Aero Squadron. This followed the official policy, established by the American Expeditionary Forces' (AEF) Chief of the Air Service, Brigadier General Benjamin Foulois, on 6 May 1918, requiring the creation of distinct, readily identifiable squadron insignia.[3] What is perhaps the most famous of all nose art, the shark-face insignia made famous by the American Volunteer Group Flying Tigers, also first appeared in World War I, though often with an effect more comical than menacing.[4] The American Volunteer Group decided to point shark mouths on their P-40Bs after seeing a color photo in a newspaper of an RAF plane in North Africa with the shark mouth painted on it.[5]

While World War I nose art was usually embellished or extravagant squadron insignia, true nose art appeared during World War II, which is considered by many observers to be the golden age of the genre, with both Axis and Allied pilots taking part. At the height of the war, nose-artists were in very high demand in the USAAF and were paid quite well for their services while AAF commanders tolerated nose art in an effort to boost aircrew morale. The U.S. Navy, by contrast, prohibited nose art, while nose art was uncommon in the RAF or RCAF.

Some nose art was commemorative or intended to honor certain people such as the B-29 Superfortress, "The Ernie Pyle".[6]

The Ernie Pyle Boeing B-29

The work was done by professional civilian artists as well as talented amateur servicemen. In 1941, for instance, the 39th Pursuit Squadron commissioned a Bell Aircraft artist to design and paint the "Cobra in the Clouds" logo on their aircraft.[7] Perhaps the most enduring nose art of WWII was the shark-face motif, which first appeared on the Bf-110s of Luftwaffe 76th Destroyer Wing over Crete, where the twin-engined Messerschmitts outmatched the Gloster Gladiator biplanes of RAF 112 Squadron. The Commonwealth pilots were withdrawn to Egypt and refitted with Curtiss Tomahawks off the same assembly line building fighter aircraft for the AVG Flying Tigers being recruited for service in China. In November 1941, AVG pilots saw a 112 Squadron Tomahawk in an illustrated weekly and immediately adopted the shark-face motif for their own planes. This work was done by the pilots and ground crew in the field.[8] Similarly, when in 1943 the 39th Fighter Squadron became the first American squadron in their theatre with 100 kills, they adopted the shark-face for their P-38 Lightnings.[7] The shark-face is still used to this day, most commonly seen on the A-10 Thunderbolt II (with its gaping maw leading up to the muzzle of the aircraft's GAU-8 Avenger 30mm cannon), a testament to its popularity as a form of nose art.

The largest known work of nose art ever depicted on a WW II-era American combat aircraft was on a B-24J Liberator, s/n 44-40973, which had been named "The Dragon and his Tail" of the USAAF's Fifth Air Force's 64th Bomb Squadron, 43d Bomb Group, in the Southwest Pacific, flown by a crew led by Joseph Pagoni, with Staff Sergeant Sarkis Bartigan as the artist. The dragon artwork ran from the nose just forward of the cockpit, down the entire length of the fuselage's sides, with the dragon's body depicted directly below and just aft of the cockpit, with the dragon holding a nude woman in its forefeet.[1] [2]

Nose art on a B-17 Flying Fortress

Tony Starcer was the resident artist for the 91st Bomb Group (Heavy), one of the initial six groups fielded by the Eighth Air Force. Starcer painted over a hundred pieces of renowned B-17 nose art, including "Memphis Belle".[citation needed] A commercial artist named Brinkman, from Chicago, was responsible for the zodiac-themed nose art of the B-24 Liberator-equipped 834th Bomb Squadron, based at RAF Sudbury, England.[9]

In the Korean War, nose art was popular with units operating A-26 and B-29 bombers, C-119 Flying Boxcar transports, as well as USAF fighter-bombers.[10] Due to changes in military policies and changing attitudes toward the representation of women, the amount of nose art declined after the Korean War.

During the Vietnam War, AC-130 gunships of the U.S Air Force Special Operations Squadrons were often given names with accompanying nose art - for example, "Thor", "Azrael - Angel of Death", "Ghost Rider", "War Lord" and "The Arbitrator." [11] The unofficial gunship badge of a flying skeleton with a Minigun was also applied to many aircraft until the end of the war, and was later adopted officially.

Nose art underwent a revival during Operation Desert Storm and has become more common since Operation Enduring Freedom and Operation Iraqi Freedom began. Many crews are merging artwork as part of camouflage patterns. The United States Air Force had unofficially sanctioned the return of the pin-up (albeit fully clothed) with the Strategic Air Command permitting nose art on its bomber force in the Command's last years. The continuation of historic names such as "Memphis Belle" was encouraged. 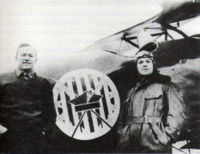 Source material for American nose art was varied, ranging from pinups such as Rita Hayworth and Betty Grable and cartoon characters such as Donald Duck and Popeye to patriotic characters (Yankee Doodle) and fictional heroes (Sam Spade). Lucky symbols such as dice and playing cards also inspired nose art, along with cartoon characters and references to mortality such as the Grim Reaper.[1] Cartoons and pinups were most popular among American artists, but other works included animals, nicknames, hometowns, and popular song and movie titles. Some nose art and slogans imposed contempt to the enemy, especially to enemy leaders.

The farther the planes and crew were from headquarters or from the public eye, the racier the art tended to be.[1] For instance, nudity was more common in nose art on aircraft in the Pacific than on aircraft in Europe.[12]

Luftwaffe aircraft did not often display nose art, but there were exceptions. For example, Mickey Mouse adorned a Condor Legion Bf-109 during the Spanish Civil War and one Ju-87A was decorated with a large pig inside a white circle during the same period. Adolf Galland's Bf-109E-3 of JG 26 also had a depiction of Mickey Mouse, holding a contemporary telephone in his hands, in mid-1941. A Ju-87B-1 (S2+AC) of Stab II/St. G 77, piloted by Major Alfons Orthofer and based in Breslau-Schongarten during the invasion of Poland, was painted with a shark's mouth, and some Bf-110s were decorated with furious wolf's heads or shark mouths on engine covers. Another example was Erich Hartmann's Bf-109G-14, "Lumpi", with an eagle's head. A Bf-109g-10 (10 red) of I./JG 300, maintained by Officer Wolfgang Hunsdorfer, was flown by various pilots. In addition, the fighter wing Jagdgeschwader 54 was known as the Grünherz (Green Hearts) after their fuselage emblem, a large green heart. The Geschwader was originally formed in Thüringen, nicknamed "the green heart of Germany". Perhaps the flashiest Luftwaffe nose art was the snake insignia running through the whole fuselage of certain Ju 87 Stukas that served with the II Gruppe of StG 2 in North Africa, the only known artwork on an Axis-flown combat aircraft that could have rivaled the length of that on "The Dragon and his Tail" B-24.

The attitude of the Finnish Air Force to the nose art varied by unit. Some units disallowed nose art, while others tolerated it. Generally the Finnish air force nose art was humorous or satirical, such as the "horned Stalin" on Maj. Maunula's Curtiss P-36.

The Japan Air Self-Defense Force has decorated fighter aircraft with Valkyrie-themed characters under the names Mystic Eagle and Shooting Eagle.[13]

Canadian Forces were reported to have nose art on CH-47D Chinook and CH-146 Griffon helicopters in Afghanistan.[14]

General Adolf Galland was famous for painting Mickey Mouse on his aircraft, and the mascot was adopted by his Gruppe during the early airwar phase of World War II.

Oberstleutnant Werner Mölders flew a yellow-nosed Bf-109F2 while with JG 51 during June 1941.

Other fighter aces and their nose art have become synonymous.

The markings of aces were often adopted by their squadrons, such as Galland's Mickey Mouse and Hartmann's black tulip (still in use today on the aircraft of JG 71 "Richthofen").

The British MoD banned the use of pin-up women in nose art on Royal Air Force aircraft in 2007, as commanders decided the images (many containing naked women), were inappropriate and potentially offensive to female personnel, although there were no documented complaints.[15]

In 1993 the United States Air Force Air Mobility Command ordered that all nose art should be gender-neutral.[16]