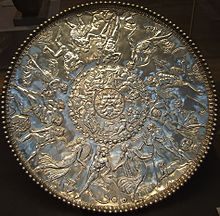 The Great Dish, or Great Plate of Bacchus, from the Roman Mildenhall Treasure 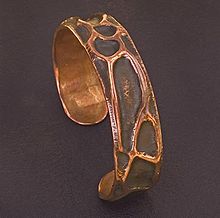 listen) is a metalworking technique in which a malleable metal is ornamented or shaped by hammering from the reverse side to create a design in low relief. There are few techniques that offer such diversity of expression while still being relatively economical. Chasing is the opposite technique to repoussé, and the two are used in conjunction to create a finished piece. It is also known as embossing.

The techniques of repoussé and chasing utilise the plasticity of metal, forming shapes by degrees. There is no loss of metal in the process, as it is stretched locally and the surface remains continuous. The process is relatively slow, but a maximum of form is achieved, with one continuous surface of sheet metal of essentially the same thickness. Direct contact of the tools used is usually visible in the result, a condition not always apparent in other techniques, where all evidence of the working method is eliminated.

The word repoussé is French and means "pushed up", ultimately from Latin pulsare, which means "to push". Repoussage is actually the correct noun to refer to the technique, with repoussé being an adjective referring to a piece to which the technique has been applied (e.g. "repoussé work", "repoussé piece"); however, in English it has become common to use repoussé as a noun, and this usage is reflected in this article.

A famous example from antiquity is the late Eighteenth Dynasty mummy mask of Tutankhamun. The lapis lazuli and other stones were inlaid in chased areas after the height of the form was completed. The majority of the mask was formed using the technique of repoussé from what appears to be a single sheet of gold (the ceremonial beard, Nekhbet vulture, and Uraeus were attached separately). The Warren Cup is a famous Roman silver cup, and the Mildenhall Treasure, the Hoxne Hoard, the Water Newton Treasure and the Berthouville Treasure are examples of hoards of Roman silver found in England and northern France with many pieces using these techniques. The prehistoric Gundestrup cauldron has relief panels on separate thin sheets on both the inside and outside.

A famous and unusually large sculpture created with this technique is the Statue of Liberty in Upper New York Bay. The statue was formed by copper repoussé in sections using wooden structures to shape each piece during the hammering process. A second example of monumental copper repoussé sculpture is Portlandia by Raymond Kaskey, which was installed in 1985 in downtown Portland, Oregon. 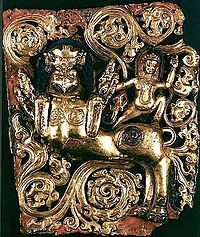 The techniques of repoussé date from Antiquity and have been used widely with gold and silver for fine detailed work and with copper, tin, and bronze for larger sculptures. Among the most famous classical pieces using this technique are the bronze Greek armour plates from the 3rd century BC.

During the 3rd millennium BC, in the Middle East, a variety of semi-mass production methods were introduced to avoid repetitive free-hand work. With the simplest technique, sheet gold could be pressed into designs carved in intaglio in stone, bone, metal or even materials such as jet. The gold could be worked into the designs with wood tools or, more commonly, by hammering a wax or lead "force" over it.

The alternative to pressing gold sheet into a die is to work it over a design in cameo relief. Here the detail would be greater on the back of the final design, so some final chasing from the front was often carried out to sharpen the detail. The use of patterned punches dates back to the first half of the 2nd millennium BC, if not far earlier. The simplest patterned punches were produced by loops or scrolls of wire. By Hellenistic times, combined punches and dies were in use. In 1400 BC, the Egyptian Amarna period, resin and mud for repoussé backing was in use. In 400 BC, the Greeks were using Beeswax for filler in repoussé.

Repoussé and chasing are commonly used in India to create objects such as water vessels. These vessels are generally made using sheets of copper or silver.

During the Hopewell and Mississippian periods of the American Southeast and Midwest goods of repoussé copper were fashioned as ritual regalia and eventually used in prestige burials.[1] Examples have been found with many S.E.C.C. designs such as Bi-lobed arrow motif headdresses and falcon dancer plaques. Although examples have been found in a widely scattered area (Spiro, Oklahoma, Etowah, Georgia, and Moundville, Alabama), most are in what is known as the Braden Style, thought to have originated at the Cahokia Site in Collinsville, Illinois.[2][3] 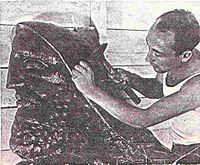 Sculptor Maurice Ascalon at work undertaking the finishing chasing of a copper repoussé relief sculpture circa 1939.

It can take some time to create jewelery or art using repoussé and chasing techniques, although with practice, complex and delicate pieces can be made which would be virtually impossible to complete using any other method.

There are different metals you can use for chasing and repousse work, such as drawn steel, silicon bronze, copper, gold, silver and pewter. The higher the content of copper, the more malleable the material will be.

The process of chasing / repousse takes a lot of time due to the repetition of a number of time-consuming stages: The first step is the preparation of the metal by annealing; cleaning to remove the pitch between annealing and work; setting up; and careful work with punches. This process is typically repeated many times during the creation of a chasing/repousse work.

One method of repoussé and chasing is to place a thin sheet of metal on a bowl of chasers pitch. This chasers pitch can be pine rosin based that can be kept slightly soft with a heat gun or plumbers torch for relief work and hardens when cooled for chasing/planishing work. It can become extremely soft or liquefied when heated too much, becoming somewhat of a burn hazard. It is not recommended, nor necessary to heat the pitch to this degree.

The purpose of using pitch is to provide a solid base to work on, whilst allowing the metal to be pushed out and shaped without obstruction. The pitch is best worked on in a pitch bowl or "pitch board." The pitch bowl is a cast iron bowl which sits on a bag stuffed with sand or on a rubber ring specifically made for this purpose. This allows for greater stability, rotation and angling. The pitch is heated using a hairdryer, or an industrial blowdryer. If the pitch is too hard, the metal will be thinned. If it is too soft, you have very little control over the form. A good medium grade chasers pitch works well because it softens enough to allow for satisfactory relief and cools to a firmness that is sufficient for chasing, planishing and detail work. 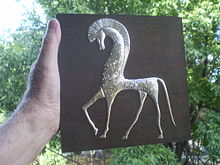 Steel tools are used to work the metal. A "liner" is a steel tool/punch with a very thin, slightly rounded end, that is used to create the initial lines on the metal. The liner is hit on the end with a chasing hammer, pushing a thin line of metal into the pitch. The side facing up will consequently be the front of the piece. Once all the lines have been chased, the metal is then turned over on the pitch, and repoussé technique is then applied, using other various steel punches/tools to push the metal so that it is raised on the front of the finished piece.

Once the repousse is done - the design raised, the piece is inverted, and the voids are filled with warm pitch to help maintain its shape. The pitch should be allowed to set in the voids and cool before the piece is turned over and placed back on the pitch. Once the piece of metal is turned over and then chased, in that the details are refined and brought out. The design is worked many times, with numerous tools, before the final result is achieved.

Every time the metal is removed from the pitch bowl, it needs to be cleaned and re-annealed. Turpentine is used to remove the pitch, and a blow torch can also be used to burn it off.

There are hundreds of tools which can be used. They are generally made by the jeweller/crafts person. They are typically made from bars of tool steel, which is forged and tempered at the tip. These hardened steel punches may be purchased by a supplier, but the specialized punches are made by the jeweler or special ordered to suit a particular design.[4] A saw can be used to cut designs into the tip for making patterns, or the tool can be hammered onto a patterned surface, which will indent the tip. The end of the tool which is to be hammered should be bevelled to allow for expansion of the metal from repeated hammering. Some of the main styles of tool include: Liners, planishers, matting, and doming. Liners have thin tips, which are slightly rounded. If they are too thin they will cut the metal. They are used in the initial marking out of the design, and in the finishing stages to refine any thin outlines. Planishers have smooth, flat tips which are used for pushing out large, flat areas of metal. Matting tools have patterns cut into them, and provide detail to areas of the design. Matting tools can also be made by filing a thin line around a steel bar, hardening it, then snapping it. This will result in a fine grain pattern. Doming tools push out rounded areas of metal, and can either be round or oval, quite pointed or almost flat. An oxyacetylene torch, coal forge or propane forge is required for heating the steel sufficiently for forging. The more tools available, the easier it is to create a detailed, accurate piece.

The traditional working surface is chaser's pitch which is usually a composition combining three substances: pure pitch, a filler (or stiffener), and an emollient (softening medium). There are a number of different recipes for making chaser's pitch. One example is:

The pitch is heated until molten. Plaster of Paris is added a small amount at a time. Resin and tallow are then mixed in.

Pitch is backing and filler material preferably rosin based, but also petroleum based, used by metalsmiths to hold the metal in place while working it.

There is a flexible pitch used by chaser's referred to as Swedish pitch.

There are other pitch choices, with two very popular choices being Red (or sometimes referred to as brown) German Pitch and a versatile medium (grade/hardness) dark green chasers pitch. There is also a black pitch.

The different pitches are used preferentially and according to the type of chasing and repousse work being done.

This pitch material can be re-used indefinitely if used and stored properly.