Chrysotile
Not to be confused with Chrysolite.

Chrysotile or white asbestos is the most commonly encountered form of asbestos,[1] accounting for approximately 95% of the asbestos in place in the United States[2] and a similar proportion in other countries.[3] It is a soft, fibrous silicate mineral in the serpentine group of phyllosilicates; as such, it is distinct from other asbestiform minerals in the amphibole group. Its idealized chemical formula is Mg3(Si2O5)(OH)4.[1]

Three polytypes of chrysotile are known.[4] These are very difficult to distinguish in hand specimens, and polarized light microscopy[2] must normally be used. Some older publications refer to chrysotile as a group of minerals—the three polytypes listed below, and sometimes pecoraite as well—but the 2006 recommendations of the International Mineralogical Association prefer to treat it as a single mineral with a certain variation in its naturally-occurring forms.[5]

Bulk chrysotile, whose hardness is about the same as that of a human fingernail, is easily crumbled to fibres that are, in fact, bundles of fibrils. Naturally-occurring fibre bundles range in length from several millimetres to more than ten centimetres,[1] although industrially-processed chrysotile usually has shorter fibre bundles. The diameter of the fibre bundles is 0.1–1 µm, and the individual fibrils are even finer, 0.02–0.03 µm, each fibre bundle containing tens or hundreds of fibrils.[3] Chrysotile fibres have considerable tensile strength, and may be spun into thread and woven into cloth. They are also resistant to heat and are excellent thermal, electrical and acoustic insulators.[1][3]

The idealized chemical formula of chrysotile is Mg3(Si2O5)(OH)4, although some of the magnesium ions may be replaced by iron or other cations. Substitution of the hydroxide ions for fluoride, oxide or chloride is also known, but rarer.[1] A related, but much rarer, mineral is pecoraite, in which all the magnesium cations of chrysotile are substituted by nickel cations.

Chrysotile is resistant to even strong bases (asbestos is thus stable in high pH pore water of Portland cement), but the fibres are attacked by acids: the magnesium ions are selectively dissolved, leaving a silica skeleton. It is thermally stable up to around 550 °C, at which temperature it starts to dehydrate. Dehydration is complete at about 750 °C, with the final products being forsterite (magnesium silicate), silica and water.[3]

The global mass balance reaction of the chrysotile dehydration can be written as follows:

The chrysotile (serpentine) dehydration reaction corresponds in fact to the reverse of the forsterite (Mg-olivine) hydrolysis in the presence of dissolved silica (silicic acid). 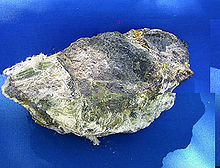 Chrysotile has been included with other forms of asbestos, in being considered to be a human carcinogen by the International Agency for Research on Cancer (IARC)[10] and by the U.S. Department of Health and Human Services.[1] which states "Asbestos exposure is associated with parenchymal asbestosis, asbestos-related pleural abnormalities, peritoneal mesothelioma, and lung cancer, and it may be associated with cancer at some extra-thoracic sites".[11] In other scientific publications, epidemiologists have published peer reviewed scientific papers establishing that chrysotile is the main cause of pleural mesothelioma. [12][13][14]

Chrysotile has been recommended for inclusion in the Rotterdam Convention on Prior Informed Consent,[15] an international treaty that restricts the global trade in hazardous materials. If listed, exports of chrysotile would only be permitted to countries that explicitly consent to imports. Canada, a major producer of the mineral, has been harshly criticized by the Canadian Medical Association[16][17] for its opposition to including chrysotile in the Convention.[18]