Chauncey Mitchell Depew (April 23, 1834 – April 5, 1928) was an attorney for Cornelius Vanderbilt's railroad interests, president of the New York Central Railroad System, and a United States Senator from New York from 1899 to 1911.

He was born on April 23, 1834. He attended Peekskill Military Academy for 12 years. He then attended Yale University from 1852 to 1856. He had second dispute appointments Junior and Senior years; speaker at Junior Exhibition and Commencement; member of the Thulia Boat Club, Linonia (third president), Kappa Sigma Epsilon, Kappa Sigma Theta, Psi Upsilon, and Skull and Bones.[1]:165

Following his graduation from Yale, Depew entered the office of Edward Wells, a lawyer in Peekskill, as a student. Depew read law with William Nelson of Peekskill, New York from 1856–58; was admitted to the bar in March, 1858; opened an office and practiced in Peekskill until 1861; later engaged in the brokerage business in New York City as member of firm of Depew & Potter for a few months; then resumed his law practice in Peekskill, but shortly afterwards moved to New York City; in 1865 appointed and confirmed United States Minister to Japan, but declined the appointment to pursue his railroad career.

In 1866, Depew became the attorney for New York & Harlem Railroad. Three years later he took the same position for the New York Central and Hudson River Railroad. Having earned recognition for his work with subsidiary companies of the Vanderbilt roads, he was moved up in 1876 to become general counsel and director of the whole "Vanderbilt System." Six years later he began serving on the executive board of the New York Central & Hudson River Railroad as second vice president. In 1885, he was elected president of the railroad and served until 1898. Following the presidency, he served as chairman of board of directors of New York Central Railroad Company. 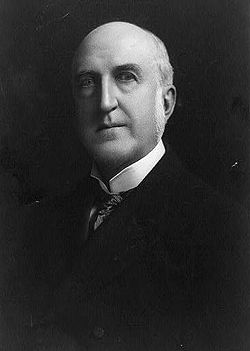 He was a member of the New York State Assembly in 1862 and 1863, in the latter year its Acting Speaker while Speaker Theophilus C. Callicot was under investigation.[2] From 1864 to 1865, he was Secretary of State of New York, elected in 1863 on the Union ticket.

He was one of the commissioners appointed to build the state capitol 1874; in 1867 appointed clerk of Westchester County, but resigned after a short service; made immigration commissioner by New York Legislature in 1870, but declined to serve; member of boundary commission of the state of New York in 1875; had also been commissioner of quarantine and president of Court of Claims of New York City and commissioner of taxes and assessments for the city and county of New York; defeated for Lieutenant Governor of New York on the Liberal Republican-Democratic ticket in 1872; candidate for U.S. Senator from New York in 1881, but withdrew after the 41st ballot; declined nomination as a senator in 1885; but elected to the U.S. Senate in 1899, and re-elected in 1905, and served from March 4, 1899, to March 4, 1911; stumped the state of New York for John C. Frémont in 1856 and for Abraham Lincoln in 1860; delegate-at-large to Republican National conventions 1888-1904 and delegate to all following conventions, including 1928, being elected the day before he died; made the nomination speeches for Harrison in 1892, Governor Morton in 1896, and Fairbanks in 1904; at the convention in 1888 received ninety-nine votes for the presidential nomination, and in 1892 declined an appointment as Secretary of State in Harrison's cabinet; Adjutant of the 18th Regiment, New York National Guard, which served in the American Civil War, and later Colonel and Judge Advocate of the 5th Division, on the staff of Major General James W. Husted of the New York Guard, trustee of Peekskill Military Academy; president of New York State Society of the Sons of the American Revolution, of The Pilgrims from 1918 until his death, of the St. Nicholas Society, and of the Union League for seven years (member since 1868 and elected honorary life member at the close of his presidency); an officer of the French Légion d'honneur; vice president of New York Chamber of Commerce 1904-08 (member since 1885).

He was made an honorary member of Columbia chapter of Phi Beta Kappa in 1887; member of citizens' committee of the civic organization to complete the Cathedral of St. John the Divine in New York City; in 1918 gave a statue of himself to Peekskill and 10 acres (40,000 m2) of land for an extension of Depew Park, which he gave to the village in 1908. He was also a distinguished orator and after-dinner speaker; author: Orations and After Dinner Speeches (1890), Life and Later Speeches (1894), Orations, Addresses and Speeches (eight volumes) (1910), Speeches and Addresses on the threshold of Eighty (1912), Addresses and Literary Contributions on the Threshold of Eighty-two (1916), Speeches and Literary Contributions on the Threshold of Eighty-four (1918), My Memories of Eighty Years and Marching On (1922); Miscellaneous Speeches on the Threshold of Ninety-two (1925); contributed a "My Autobiography" in 1922, and an article to the 50th Anniversary Supplement of the Yale Daily News entitled "An Optimistic Survey" in 1928; member Metropolitan Museum of Art, American Association for the Advancement of Science, Society of Colonial Wars, Connecticut Society of the Society of the Cincinnati, Holland Society, Huguenot Society, New England Society, France-America Society, New York Historical Society, St. Augustine (Fla.) Historical Society, American Scenic and Historic Preservation Society, National Horse Show, Lafayette Post of the G. Al R , and St. Thomas' (Episcopal) Church, New York; made life member of Lawyers' Club of New York in 1918; honorary member New York Genealogical and Biographical Society.

Death due to bronchial pneumonia. Buried in family mausoleum in Hillside Cemetery, Peekskill.

The Village of Depew, New York, incorporated in 1894 and once home to a New York Central Railroad factory, is named after Chauncey M. Depew. 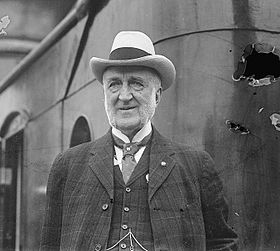 His father, Isaac Depew, was a merchant and farmer; pioneer in river transportation between Peekskill and New York; son of Abraham Depew, who served in the Revolutionary Army, and Catherine (Crankheit) Depew, great-grandson of Captain James Cronkite of the Continental Army; descendant of Frangois DuPuy, a French Huguenot, who came to America about 1661, settled first in Brooklyn, N. Y., and in 1685 bought land from the Indians at the present site of Peekskill. Mother, Martha Minot (Mitchell) Depew; daughter of Chauncey Root Mitchell, a lawyer, and Ann (Johnstone) Mitchell; granddaughter of the Rev. Justus Mitchell (BA 1776); great-granddaughter of the Rev. Josiah Sherman (B A. Princeton 1754, honorary M.A. Yale 1765), who served as a Chaplain with rank of Captain in the Revolutionary War and who was the brother of American founding father Roger Sherman; descendant of Matthew Mitchell, who came to Boston from England in 1635, descended also from Capt. John Sherman, an English officer, who was born in Dedham, Essex County, in 1615, and from the Rev. Charles Chauncey (B.A. Trinity College, Cambridge, 1613), who came to Plymouth in 1637 and was the second president of Harvard.

Depew was also the paternal uncle of Ganson and Chancey Depew, sons of his brother William Beverly Depew. Ganson Depew was a vice president of the Buffalo & Susquehanna Coal Company; and the personal assistant of his father-in-law Frank Henry "F.H." Goodyear. Goodyear who was the president of the Buffalo & Susquehanna Railway. Chauncey DePew, like his uncle, also worked for the Vanderbilt Railway Systems. His nephew Chauncey married Julia Catlin Park, but later divorced.

When Chauncey Depew died, he was buried in Peekskill. In his honor, the huge concourse of Grand Central Terminal was draped in mourning.

Depew was painted by a number of artists, including George Burroughs Torrey, but most frequently by the Swiss-born American artist Adolfo Müller-Ury who first painted Depew in 1889-90, the three-quarter length portrait of Depew seated on a bale of furs which was exhibited at the Paris Salon in 1890, and is now in the Yale Club of New York City. Several other portraits followed including a portrait painted for the New York State Capitol at Albany showing Depew as he was in 1863 (now New York State Museum). The artist gave a bust-length portrait to the Museum at Peekskill in 1918. Muller-Ury made an etching of Depew (copies, signed by the artist and the sitter, are in the American National Portrait Gallery in Washington DC and in the collection of the Newport Preservation Society Rhode Island, and University of Cincinnati College of Design). Muller-Ury also painted Depew's first wife in 1893, and his second wife in 1902 in eighteenth century costume.