Noh-Varr is a fictional character created by Grant Morrison and J.G. Jones and appearing in comic books published by Marvel Comics. He first appears in Marvel Boy #1 (August 2000). He appeared in the Civil War: Young Avengers/Runaways and the New Avengers: Illuminati limited series. After his appearance in Secret Invasion, he joins the Dark Avengers as Captain Marvel.

Marvel Boy was a six-issue limited series published from August 2000 to March 2001, as part of the experimental Marvel Knights line. The series was written by Grant Morrison, illustrated by J.G. Jones (with Sean Parsons) and colored by Matt Milla of Avalon Studios. In a 2000 interview, Morrison described his stylistic intentions for the book:

The character has appeared since in a number of series. He took a big part in the finale of the Secret Invasion, which leads into his new role as Captain Marvel in the Dark Avengers title. The writer Brian Michael Bendis has said "what he represents is Norman can put an alien on the team, whose [sic] one of the Anti-Skrulls. It's like, 'You hate Skrulls? Well this guy kills Skrulls for a living! He came to our planet to kill Skrulls!'."[2]

Noh-Varr serves as an ensign aboard the 18th Kree Diplomatic Gestalt interstellar schooner the Marvel, which traverses millions of alternate dimensions on its way home. The ship is drawn toward the Marvel Universe and shot down by the forces of Dr. Midas, a multi-trillionaire obsessed with gaining powers through the absorption of cosmic rays. Midas blasts the Marvel out of the sky in an attempt to acquire the ship's cosmic ray-powered engines. His friends and comrades killed, Noh-Varr emerges as the only survivor.

Noh-Varr then encounters the sentient corporation known as Hexus. Accidentally released from a containment cell when the Marvel crashed, Hexus begins to take over world-wide commerce in an attempt to subjugate the human population and ultimately control Earth. Noh-Varr invades the control center of Hexus and ultimately destroys the "social parasite" by releasing all of its trade secrets to its competitors.

Noh-Varr finds himself pursued by Dr. Midas and his minions, and upon striking an alliance with Midas' daughter Oubliette, Noh-Varr defeats the megalomaniac. After the battle, agents of S.H.I.E.L.D. capture Noh-Varr and incarcerate him in a seemingly inescapable prison known as the Cube. While in custody, Noh-Varr declares war on Earth and the human race.

Noh-Varr at one stage gets the attention of the Illuminati. Its members: Professor X, Mister Fantastic, Black Bolt, Iron Man, Dr. Strange, and Namor are worried about the fact Noh-Varr has declared war on the entire planet and try to change his mind. They visit him at the Cube in the form of a mental projection, and speak to him in turn, explaining the legacy of Captain Marvel and telling Noh-Varr that he can choose to live as a hero or spend the rest of his life in The Cube. They ultimately leave him with the choice and tell him to earn his way out.

Noh-Varr is brainwashed and ordered to capture the Runaways by S.H.I.E.L.D. Director Maria Hill.[volume & issue needed]

After being released for his mission by the cruel warden of the Cube, Noh-Varr brutally subdues the Runaways and the Young Avengers. When the warden of the Cube feels the mission has finished successfully, he orders Noh-Varr's retrieval. As the Young Avengers and the Runaways assault the Cube, he engages them in battle. After a brief fight, Noh-Varr is defeated and the Vision reverses the Cube's mental control over him. He is seen taking control of the Cube, declaring it to be the capital city of the new Kree Empire.[volume & issue needed]

When the alien virus the Skrulls upload release all the prisoners within the Cube, Noh-Varr announces that it is "time to go."[3] Later, while escaping on a stolen S.H.I.E.L.D. minijet, he's stopped by a dying Khn'nr. At first mistaking him for the original Captain Marvel, Noh-Varr stops to listen to his final words, as Khn'nr appoints him as the new Protector of the Earth, spurring him to fill in the role once covered by Mar-Vell himself, and stop the Skrulls, perceived as liars and honorless beings. Noh-Varr is left shaken by the revelation, after witnessing the dying Khn'nr reverting to his alien Skrull appearance.[4]

Finally deciding to take a side in the war, Noh-Varr uses the solar energies of Captain Marvel's Nega-Bands, causing a huge explosion in the middle of the battle in New York. Then he declares to the Skrull army that their invasion is over.[5]

Noh-Varr is told by Norman Osborn that he is a war hero and he wants him to be what who he truly is. He is recruited to Norman Osborn's Avengers team, and takes on the mantle of the new Captain Marvel.[6]

When the Church of Hala branch in Charleston, South Carolina commit mass suicide due to Noh-Varr taking Captain Marvel's name, Carol Danvers goes to investigate. While looking around, she finds Noh-Varr in an alley behind the church. After Carol tries to attack Nor-Varr twice and blames him for what the church has done in the original Captain Marvel's name. He explains that the Captain Marvel they founded this church for was a Skrull and he died in his arms, claiming his love for this world and her people and asked he protect this world from those who wish to harm it. Carol does not believe it and Noh-Varr flies away, telling her to believe what she will and to remember this meeting, because he never threw a punch.[7]

After their first mission Noh-Varr has shown an attraction to teammate Ms Marvel, which is noticed by fellow teammate Ares, much to his amusement. The team then decided to relax in the Avengers Tower once they have returned. In the evening, Noh-Varr is walking back to his room from a shower, when Karla invites him into her room. After having sex with Noh-Varr, Karla turned on the television, telling him she wanted to see how Norman would explain why his "Avengers" are full of criminals. Noh-Varr is shocked at the news that the rest of his teammates are all criminals pretending to be heroes. He then goes missing.[8]

Since abandoning the team, Noh-Varr has kept a low profile in order to elude the Dark Avengers and trying to determine what his role is while he is living on Earth. In Dark Reign: The List - Wolverine, it is revealed that one of Noh-Varr's missions as a Dark Avenger was to capture the World facility. He goes to Wolverine and warns him of Osborn's plan and together, they take the World facility from Osborn's grasp, leaving it in the hands of Fantomex. Later, Noh-Varr befriends a young woman named Annie at the same time he is found by the Sentry, who has come to take him back to Osborn. A battle ensues in the middle of Manhattan with Noh-Varr on the verge of losing when Annie intervenes and fires on the Sentry with one of Noh-Varr's Kree weapons, distracting him. Noh-Varr flees and returns to an abandoned building where he has been building a Kree communicator to contact the Kree Supreme Intelligence.

In Dark Avengers Annual #1, a holographic message sent by the Supreme Intelligence tells Noh-Varr that the actions of the Skrulls during Secret Invasion have left Earth in more danger than ever before and that Noh-Varr is the planet's new protector. The Supreme Intelligence then grants him the power needed to carry out his mission in the form of a set of Nega-Bands, more advanced than the ones worn by Captain Marvel. The bands also provide him with a new costume and prevent the Dark Avengers from detecting his presence. After finding Annie and thanking her for her help, he teleports away. Unbeknown to Noh-Varr however, he was being observed by Captain America (Bucky) and Steve Rogers, who are trying to determine if he could be a potential ally against Osborn.[9] 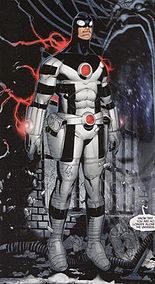 Noh-Varr later appears as the new costumed hero, Protector, in the back matter of Ms. Marvel #50. Taking place after an undefined amount of time after the events of Dark Avengers Annual #1, Noh-Varr and Annie are seen traveling together. An unidentified female, wearing hi-tech battle armor, from the future has located Noh-Varr and time slips in to "test" Noh-Varr. Noh-Varr transforms into the Protector and battles the female. The female realizes she has met a younger and weaker Protector than expected and before killing the civilians is knocked aside by Protector. The now unmasked assailant is revealed to be an older Annie, telling Noh-Varr "it will all make sense...someday" before locking onto another Noh-Varr and time slipping out.[10]

Noh-Varr is recruited into the Avengers team to help them build a time machine to save the future. Tony Stark attempts to hire him due to his vast knowledge in order to 'unleash his alien mind onto the world', which Noh-Varr turns down, having vowed to keep the secrets of Kree technology out of the economy of Earth. Within a short time, Noh-Varr creates a time-space continuum viewer which allows the Avengers to view a myriad of possible futures, including MC2, Marvel 2099, Days of Future Past and Age of Apocalypse, before seeing the timestream collapse. Noh-Varr then helps the Avengers fight off an angry Wonder Man, who is convinced the reformation of Avengers is a mistake.[11] Shortly afterwards, they are then attacked by a time-lost future Apocalypse and his four horsemen, which consists of corrupted heroes including the Scarlet Witch, Spider-Man, and Wolverine. In the aftermath, Noh-Varr manages to calm down Spider-Man, who is bemoaning his possible future, with a joke before he heads off with some of the team to build a new time machine.[12] Having traveled to the future with Wolverine, Captain America, and Iron Man, they are promptly defeated by a possible future team of Avengers, and taken to their leader Maestro, who is happy to see them, as he is working with a future version of Tony Stark.[13]

Noh-Varr on the cover to Marvel Boy #2, Art by J.G. Jones

Noh-Varr is a Kree (albeit from another universe) who has been enhanced with insect DNA. He has demonstrated enhanced reflexes, speed, strength, and endurance well beyond that capable of a normal human. He is able to re-route his neurological impulses so that he can avoid experiencing physical pain, and even suppress any stimulus he does not want to experience, making him a deadly opponent in battle. In Civil War: Young Avengers/Runaways he performs a "White run", pushing everything unrelated to the fight from his mind, allowing him to defeat Xavin, Karolina Dean, Wiccan, and Hulkling within 5 seconds.

In addition, Noh-Varr is "triple jointed," allowing extreme feats of contortion and the ability to survive what would otherwise be crushing forces. Noh-Varr can also scale even the smoothest surfaces, including vertical walls, glass windows, and ceilings.

When needed, he can digest any organic substance without adverse effects. As a result, he can eat rotting or poisonous food as well as non-food stuffs (e.g., cardboard, paper, etc.). He uses this ability to recover from wounds or extreme stress.

Noh-Varr's saliva contains biologically active properties that infects the bodies of those it touches. This causes hallucinations and allows Noh-Varr a degree of mind-control. His fingernails can grow into a deadly crystalline spike. Noh-Varr can insert this nail into an opponent and leave it to explode, killing both the target as well as causing extensive damage to the surrounding area.

In Dark Avengers Annual #1, Noh-Varr makes contact with his people and is given a pair of Nega-Bands of his own along with a new costume.

Noh-Varr also has access to a wide variety of advanced Kree technology, including high-tech weaponry such as self-replicating grenades, plasma guns, and a "pocket battlefield" that can simulate unique battle environments for combatants.

Noh-Varr is adept at the sciences of interdimensional travel. He can construct and operate devices to view and traverse the timestream and alternate dimensions.[11]