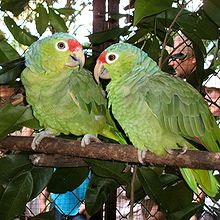 A. a. salvini at Cana Blanca Wildlife Sanctuary, Costa Rica 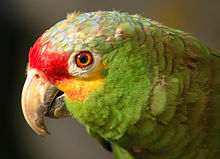 Head plumage of adults is characteristic, but the cheek color varies among subspecies, with this, A. a. autumnalis, being the only with a bright yellow patch. 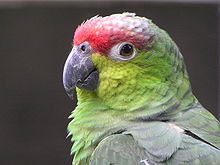 A. a. lilacina is local within its already small range, leading to concerns about its status. 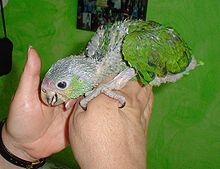 A captive-bred Red-lored Parrot chick, shown at age of 6 weeks.

A pet juvenile in Costa Rica

The Red-lored Amazon or Red-lored Parrot (Amazona autumnalis) is a species of Amazon parrot, native to tropical regions of the Americas, from eastern Mexico south to Ecuador, with a disjunct population in central Brazil, where it occurs in humid evergreen to semi-deciduous forests up to 1,100 m altitude. It is absent from the Pacific side of Central America north of Costa Rica. Not originally known from El Salvador, a pair - perhaps escaped from captivity - nested successfully in 1995 and 1996 in the outskirts of San Salvador[1] and the species might expand its range permanently into that country in the future.[2]

The Red-lored Amazon is 32–35 cm (13 in) in length, with a weight of 310–480 g. The plumage is primarily green, with a red forehead and, in some subspecies, yellow cheeks (sometimes with red spots). The crown is blue. Adult males and females do not differ in plumage. Juveniles have less yellow on the cheeks, less red on the forehead, and dark irises.

There are four subspecies:[3]

Their food includes fruits,[4] nuts and seeds. Avoid feeding these guys Seeds, they are pron to weight problems.

The Red-lored Amazon nests in tree cavities. The eggs are white and there are usually three or four in a clutch. The female incubates the eggs for about 26 days and the chicks leave the nest about 60 days after hatching.[5]

In some areas, notably parts of Mexico and Venezuela, the Red-lored Amazon has become rare through trapping for the cagebird trade. On the other hand, it seems to be able to adapt to human-altered habitat to a considerable degree.[2]

Red-lored Amazons are fairly common pet parrots in the Americas. They can be devoted pets and some make fairly good talkers. Like most Amazon parrots they often have a tendency to vocalize loudly, and sometimes to bite. Their behavior ranges from being quiet and curious to being aggressive, this can all be changed by basic training when the bird is of young age.

Avocado and eggplant are poisonous to them (as they are for many parrots and other animals).