The Cuban Amazon, Amazona leucocephala, also known as Cuban Parrot or the Rose-throated Parrot, is a medium-sized mainly green parrot found in woodlands and dry forests of Cuba, the Bahamas and Cayman Islands in the Caribbean.[1][2] 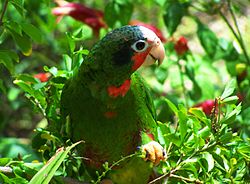 The Cuban Amazon is a medium-sized parrot 28–33 centimetres (11–13 in) long.[3] It is mainly green with some blue feathers in its wings.[4] The green feathers are edged with a terminal black rim.[5] Its lower face, chin and throat are rosy pink, and its forehead and eye-rings are white.[4] The extent of the various colours of the head, the extent of the rosy pink on the upper chest, and the extent of the dull red on the abdomen vary between the subspecies.[2][5] Its irises are pale olive-green, its beak is horn-coloured, and the feathers over the ears are blackish.[5] The legs are pink.[5] The juvenile has little or no red on the abdomen, less black edging on the green feathers, and some of the feathers on the top of its head may be pale yellow rather than white.[5]

Traditionally, most authorities have recognize four subspecies of the Cuban Amazon,[6][7] thereby following the 1928 review by James Lee Peters.[4]

A. l. palmarum (Todd, 1916) was thought to be a separate subspecies living in western Cuba (east to Villa Clara Province) and Isla de la Juventud based on differences in the plumage, but in 1928 a re-evaluation indicated that the colour differences were due to age-related variations and that they showed no substantial differences to the specimens obtained from the rest of Cuba (i.e., A. l. leucocephala sensu stricto).[4] The two populations are very similar genetically,[8] but some authorities have maintained that A. l. palmarum is a valid subspecies.[9][10][11] A recent review based on morphology and plumage supported the distinction of A. l. palmarum (at least if restricted to the population on Isla de la Juventud), it having a longer wing chord and metatarsus, and a larger rosy pink throat patch than A. l. leucocephala of the Cuban mainland.[12] This review also revealed differences among the populations on the various islands in the Bahamas (some of which had already been pointed out earlier[8][13]), leading to the suggestion of restricting A. l. bahamensis to the now extirpated population of the Acklins and Crooked Islands, while it was proposed that the two extant populations from the Abaco Islands and the Inagua Islands each represent a new subspecies.[12] The recognition of three subspecies from the Bahamas is also supported by genetics.[14]

The populations were estimated at about 3,550 individuals on Abaco and 6,350 on Inagua in 2006.[2] The population on the Acklins and Crooked Islands was extirpated in the 1940s,[15] while it, based on fossil remains and archeological findings, historically also has been present on several other islands in the Bahamas (e.g., New Providence and San Salvador) and on Grand Turk Island.[8] 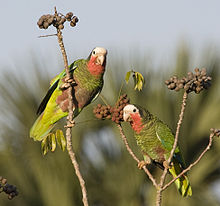 Two in a fruiting tree in Cuba

In the winter Cuban Amazons gather in flocks, and disperse into pairs during the breeding season.[2]

The Cuban Amazon feeds on a number of fruits and seeds including the fruits of palm trees and West Indian mahogany (Swietenia mahagoni) seeds.[2]

The breeding season is from March to September.[2] Cuban Amazons nest in tree cavities throughout most of its range, the only exception being that the parrots living on the Abaco Islands nest underground in limestone solution holes, where they are protected from pineyard wildfires.[3] Two to four white eggs are laid, which are incubated by the female for 26–28 days.[2]

Due to ongoing habitat loss, occasional natural disasters and trapping for the wild parrot trade, the Cuban Amazon is evaluated as Near Threatened on the IUCN Red List of Threatened Species.[1] It is protected with a listing on Appendix I of CITES,[16] which prohibits international trade of listed wild-caught species.[17] 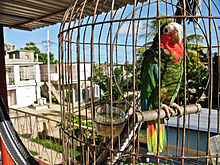 Pet in a small round cage in Cuba

The Cuban Amazon was seldom-seen in aviculture outside of Cuba and Florida (where it was bred in captivity by Cuban immigrants) until the 1980s and is considered one of the more difficult to breed Amazon parrots, with aggressive behaviour from cock birds towards their mates and their own chicks a relatively common occurrence. Despite increased availability in recent times, the Cuban Amazon is still one of the highest-priced of all amazons. Several colour mutations have been observed in captive-bred stock.[18]