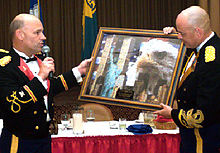 Dining in is a formal military ceremony for members of a company or other unit, which includes a dinner, drinking, and other events to foster camaraderie and esprit de corps.

The dining in is a formal event for all unit members, male and female; though some specialized mess nights can be officer- or enlisted-only. The unit chaplain is usually also invited, if an invocation is needed. A unit's dining-in consists of only the members of the unit, with the possible exception of the guest(s) of honor. An optional formal dinner, known as the dining-out may include spouses and other guests. The dining-out follows the same basic rules of the dining-in, but is often tailored to minimize some of the military traditions and be more interesting to civilian guests.

"Except for the annual celebration of the Marine Corps Birthday, no social function associated with the smaller of America's naval services is more enjoyed, admired and imitated than the mess night."[2]

The practice of dining in is thought to have formally begun in 16th-century England, in monasteries and universities; though some records indicate that militaries have held formal dinners as far back as the Roman Legions. The Vikings held formal ceremonies to honor and celebrate battles and heroes.[3] During the 18th century, the British Army incorporated the practice of formal dining into their regimental mess system. Customs and rules of the mess were soon institutionalized rules, known as the "Queen's Regulations". The mess night or "Dining in" became a tradition in all British regiments. The Americans, taking many of their traditions from the British military, held mess nights in the 18th and 19th century, but the tradition waned after the Civil War.

During World War II, the custom was revived in the U.S. military, initially in the US Army Air Forces 8th Air Force, which was based in Britain. AAF Officers were invited to participate in host British military Mess Nights and then were obligated to reciprocate. Dining in took a temporary halt in the Navy and Marine Corps when Navy Secretary Josephus Daniels imposed prohibition of alcoholic drink, but soon the tradition was restored.

By the early 19th century, the British Army's "mess night" developed formal rules, as a result of troops being stationed in remote areas. Officers elected mess committees to conduct their meals. The officers were expected to adhere to the rigid etiquette of Victorian-era society.

Portions of the event tend to become quite humorous in nature, while others remain somber. Etiquette requires a diner to know what is appropriate at any given time.

The dining in follows established protocols. After a brief cocktail period of 30 to 45 minutes, the presiding officer, known as the "President of the Mess", announces, "Please be seated." The group will then retire to the dining area to be seated.

After tasting the meat (usually beef), the President will declare it "tasty and fit for human consumption", after which the meal will be served to the diners. After the dessert is finished, the President will invite the chief steward to bring forth wine and/or punch to be served, and toasting will begin. After the toasts have concluded, the floor will be opened to the levying of fines. The president and the guest of honor will have the opportunity to speak if they so desire. After this, the mess is often then returned to an open cocktail hour, and then the evening concludes with final honors. 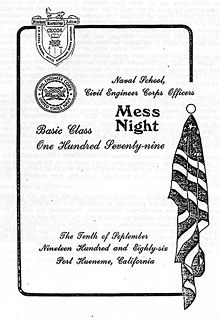 Formal toasts are the heart of the formal dining in. A junior officer, known as "Mr Vice", proposes a toast to the guests, at which the guests remain seated. After this, various parties will offer toasts to the Commander in Chief, to the heads of state of a visiting or host nations, to their branch of service, to the units, and to the fallen members of the military.

Notice that the United States does not have a king, queen, or Prime Minister, and that the commander in chief and President are the same person.

The final and most solemn toast is always to fallen comrades. Often this tribute is marked with a display, including an empty table with a black tablecloth, inverted glass, blank dog tags, and a symbol representing tears (salt or lemon).[4]

Some unusual forms of toasting are common to the U.S. and Canadian traditions. In the Toronto Scottish Regiment, for example, a loyal toast to the regiment's colonel-in-chief is performed standing with one foot on the chair and one foot on the dining table, facing a portrait of the C-in-C and drinking after the piper has played.[5] Others, particularly Scottish regiments[6], perform toasts in the same way with one foot on a chair and one on the table.[7] This is a frequent form of toasting in the United States Marine Corps as well.[7] In the Scottish form, the glass is raised, lowered, brought out, and brought in, as the words of the toast, usually including some form of "Up", "Down", "To you", "To me", are recited, and finally drunk to the cry "Drink it up!" or similar.[7][6]

Violations of etiquette and other traditions

At some mess nights, violators of the mess are obliged to publicly drink from a grog bowl in front of the mess attendees. The grog is sometimes contained in a toilet bowl, consisting of various alcoholic beverages mixed together. As a more disgusting effect, the grog may also contain floating solids, such as meatballs, raw oysters, or Tootsie Rolls. The tradition of drinking grog originated with the British Navy. Grog consisted of the regulation rum ration diluted with water to discourage binge drinking. In modern times, grog comes in two varieties: alcoholic and non-alcoholic, the latter of which may contain anything that will make it less appealing to the taste, including hot sauce. For additional effect, the drinker may be required to drink from a boot.

In addition to visiting the grog bowl and paying fines, violators may be sentenced to sing songs, tell jokes, do pushups, or perform menial tasks to entertain the mess. In most cases, when a violator has been identified, he or she is given the opportunity to provide a rebuttal or defense for the violation, which rarely results in the violator being excused for the offense, and usually only results in more punishment.

Traditionally, all fines collected throughout the night are split amongst the stewards that served the attendees as a token of appreciation for their efforts. The fines can also be used to pay for the drinks consumed, while some units have used the Mess Night as a fund raiser (often to pay for a ball).

Members of the mess may also be singled out for some good-natured ribbing and teasing. In some units, members go out of their way to be picked on, often wearing obvious uniform violations, such as crowns, tiaras, eye-patches, bowties and cummerbunds of the wrong color, and other items that have no place on any military uniform. Some will attempt to leave sabotaging evidence on or around others they wish to see fined, so care must be taken to not be the butt of a joke.

Navy and Marine traditions also include that no diner may leave the hall to use the restroom without permission until Mr. Vice suggests that the company "shed a tear for Lord Admiral Nelson", a reference to the fact that his body was preserved in a barrel of brandy after his death at Trafalgar.

Most Messes attempt to furnish the night with military music and marches, with live bands if possible, or recorded music. Depending on how formal the ceremony is, the diners may be required to march to their seats.

In recent times, Marines have established a variant of the mess in a "field environment",[10] subsituting in mess dress for utilities and combat equipment (to include camouflage facepaint), canteen cups, and tentage, while still retaining the formal nature of the ceremony.