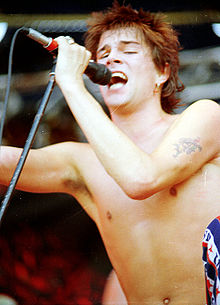 Die Toten Hosen is a German punk band from Düsseldorf. They have enjoyed decades-long mass appeal in Germany.

The band's name literally means "The Dead Pants" (i.e. trousers) in English, although the phrase "tote Hose" is a German expression meaning "nothing going on" or "boring". Their name is figuratively best translated as "The Dead Beats".

The members of Die Toten Hosen are Campino (Andreas Frege), Kuddel (Andreas von Holst), Vom (Stephen 'Vom' Ritchie), Andi (Andreas Meurer) and Breiti (Michael Breitkopf). Although most of the members are German, drummer Vom is actually from England and replaced Wölli as the drummer in 1999; Wölli's untimely departure from the band was due to injuries caused by a car accident. Wölli himself had replaced Trini in 1985, and is still an honorary member of the band; Trini became the band's manager when Wölli joined.

The band has existed for over 20 years, and their songs' focus gradually shifted from funny and nonsensical to serious; the songs from their first LP were mostly about having fun, but by the end of the 1980s they were focusing more on political and social issues such as racism.

Part of the folklore surrounding the band is the story that in their early days they played for free at private birthday parties or similar events. However, this was only under the condition that the host provided an unlimited beer supply and paid for all damages caused by the band.

The debut single "Wir sind bereit" ("We are ready") was released in 1982, and was followed by their first album, Opel-Gang, the next year. In 1988, Die Toten Hosen released the LP Ein kleines bisschen Horrorschau ("A little bit of horrorshow" ("horrorshow" is Nadsat for "ok", coming from the Russian word хорошо (horosho (good))) referring to the phrase in "A Clockwork Orange"), which featured the song "Hier kommt Alex" (referring to the movie A Clockwork Orange based on the book by Anthony Burgess); in 1988, Bernd Schadewald produced a German theater version of the book, in which the band performed as actors and musicians. "Hier kommt Alex" (Here comes Alex) was later redone for the unplugged show in 2005 with the opening piano of Beethoven's Moonlight Sonata. Their 1000th concert was on 28 June 1997, in the Düsseldorfer Rheinstadium, and was attended by more than 60,000 fans. A Dutch girl, Rieke Lax, died in the crowd; later the band produced the song "Alles ist eins" ("Everything is one") in memorial for her.

Their first tour after this event was as part of the 1998 Warped Tour to New Zealand, Australia, Japan and Hawaii, and included hospital visits for Campino after two of the nine Australian dates (Byron Bay and Geelong).

Die Toten Hosen have collaborated with numerous other musicians (like Bad Religion, AC/DC, U2, Rolling Stones); they are also one of the few German punk bands popular outside of Germany (esp. in South America, Australia, Eastern Europe) other notable bands being Die Ärzte and WIZO.

As longtime fans of their local football team, Fortuna Düsseldorf, they sponsored the club from 2001 to 2003. Fortuna Düsseldorf plays the chorus of "Strom" when a goal is scored at the Esprit Arena. They also published a song named "Bayern" in 2000, referring to the famous football club in Germany. Roughly translated, the text reads "many things can happen, many things can occur, I just know one thing for sure, I'd never join FC Bayern Munich".

In August, 2006, Campino (Andreas Frege) starred as Mack the Knife in a new version of "The Threepenny Opera" staged at Berlin's Admiralspalast, a short distance down Friedrichstrasse from where the play received its premier in 1928. Staged by actor Klaus Maria Brandauer, the much-awaited production opened to mixed reviews, with cheers for German rock star Campino, but scattered boos for Brandauer's "conventional" staging.

Artist Andreas Gursky sold a famous work called "Tote Hosen", a blown up photograph of the crowd from a Die Toten Hosen concert. It features a crowd of German youths, many wearing the red Hosen shirt, excitedly cheering for the band. It is in the collection of the Museum of Modern Art.

Faith No More seem to be fans as well, as bassist Billy Gould has been seen wearing a Mach et. .. ficken, bumsen, blasen T-shirt on their greatest hits album, This Is It: The Best of Faith No More. In addition, Faith No More have covered the song "Hofgarten" in live shows.

Fellow German rock group Samsas Traum covered "Hier kommt Alex". This was a remarkably different version to the original, as it featured a more goth orchestration take on the song, and main singer Alexander Kaschte changes the final lyric to "Hey! Ich bin Alex!" (Hey! I am Alex!) for a joke on the song's theme itself. Also, legendary UK punk band UK Subs recorded an English-language cover of the song on their 1993 album Normal Service Resumed. "Hier kommt Alex" is featured in Guitar Hero III: Legends of Rock as well as a song on the European disc of Rock Band.[1] The song was also released as a downloadable track on the American version of Rock Band on 27 May 2008.[2] Die Toten Hosen also have a special edition of "SingStar" for PlayStation 2, devoted exclusively to the band, featuring 24 tracks and videos from over the decades, which was released in 2007.

MC Frontalot, in collaboration with faux-German electronic musician KOMPRESSOR on the track "Rappers We Crush", rhymes "What did I do to deserve this?/What was my crime?/Was it because I sampled Die Toten Hosen that one time?"

In 2010, the band played several dates in Central Asia and became the first non-local rock band to perform in the former Soviet republic of Tajikistan since 1991. These concerts were later criticised when it was confirmed that the supposedly anti-establishment group had sought and accepted 68,000 Euros of German government funding to support their tour [4].

On Saturday, 2 October 2010, The band played for the first time in the Middle East for the 20th anniversary for the fall of Berlin Wall, specifically in Amman, Jordan. And the concert was a great success.

Although the band has its roots in punk rock, their style is far more than just punk rock. The band has visible influences from Hard Rock, Heavy Metal, Hardcore Punk and also Alternative Rock.