The dollar (currency code NAD) has been the currency of Namibia since 1993. It is normally abbreviated with the dollar sign $, or alternatively N$ to distinguish it from other dollar-denominated currencies. It is divided into 100 cents.

The dollar replaced the South African rand, which had been the country's currency while it was under South African rule as South-West Africa 1920-1990. The rand is still legal tender, as the Namibian dollar is linked to the South African rand and can be exchanged on a one-to-one basis locally. Namibia was also part of the Common Monetary Area from independence in 1990 until introduction of the dollar in 1993.

In 1990, moves were under way to replace the rand with a new Namibian currency. The name kalahar was proposed, as the Kalahari Desert is located in eastern Namibia. The name of Namibia's central bank was going to be known as the Namibia Reserve Bank. Denominations of this planned currency included 2, 5, 10, and 20 kalahar. (Note: There were two different designs for the 20 kalahar specimen notes.) However, these plans came to nothing, but some specimen notes were printed in a range of denominations.[citation needed]

Hendrik Witbooi, once a Namaqua chief and instrumental in leading the revolts against German rule at the turn of the 20th century, is depicted on all banknotes. 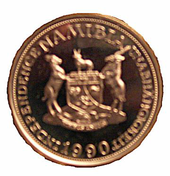 During the planning phase of the introduction of a new national currency replacing the South African rand, the newly founded Bank of Namibia minted a proof series of coins denominated in dollars as well as in marks, for the consideration of the Namibian Ministry of Finance. The decision then fell in favour of the name ‘dollar’ for the new currency.

The proof series consisted of four different coins: 1 mark, 1 dollar (both in copper/nickel), 10 marks and 10 dollars (both in silver). The recto of the mark pieces shows a sitting lion where the dollar pieces depict a Bushman with bow and arrow. All recto sides bear the indication of denomination as well as the remark ‘PROBE’/‘ESSAI’ (proof). The verso of the 1-mark/1-dollar pieces shows Namibia’s former coat of arms surrounded by the inscription ‘NAMIBIA’, the year (1990) and two ears of corn. The ten-mark/ten-dollar pieces bear the inscription ‘INDEPENDENCE’/‘UNABHÄNGIGKEIT’ (G. ‘independence’) instead of the ears.

There was a series of Namibian pattern coins denominated in Rand dated 1990. These pattern coins are listed in the 2005 edition of Krause's 'Unusual World Coins'.

In adopting the Namibia dollar, Namibia followed the pattern of South Africa, Australia, and New Zealand in that when it adopted the decimal system, it decided to use the half pound unit as opposed to the pound unit of account. The choice of the name dollar was motivated by the fact that the reduced value of the new unit corresponded more closely to the value of the US dollar than it did to the pound sterling.