The Croix de guerre (English translation: Cross of War) is a military decoration of France. It was first created in 1915 and consists of a square-cross medal on two crossed swords, hanging from a ribbon with various degree pins. The decoration was awarded during World War I, again in World War II, and in other conflicts. The Croix de guerre was also commonly bestowed on foreign military forces allied to France.

The Croix de guerre may either be bestowed as a unit award or to individuals who distinguish themselves by acts of heroism involving combat with enemy forces. The medal is also awarded to those who have been "mentioned in despatches", meaning a heroic deed was performed meriting a citation from an individual's headquarters unit. The unit award of the Croix de guerre was issued to military commanders who performed heroic deeds in combat and were subsequently recognized by headquarters.

The Croix de guerre medal varies depending on which country is bestowing the award and for what conflict. Separate French medals exist for the First and Second World War.

For the unit decoration of the Croix de guerre, a fourragère is awarded which is suspended from the shoulder of an individual's uniform.

There are three distinct Croix de guerre medals in the French system of honours :

Furthermore, the French collaborationist government created two croix during World War II. These croix are illegal and wearing them is outlawed.

The Croix was created by a law of April 2, 1915, proposed by French deputy Émile Briant. The Croix reinstated an older system of mentions in dispatches, which were only administrative honours with no medal. The sculptor Paul-André Bartholomé created the medal, a bronze cross with swords, showing the effigy of the republic.

The French Croix represents a mention in dispatches awarded by a commanding officer, at least a regimental commander. Depending on the officer who issued the mention, the ribbon of the Croix is marked with extra pins.

The French Croix de guerre des TOE was created in 1921 for wars fought in theatres of operation outside of France. It was awarded during Indochina War, Korean War, and other wars up to Kosovo War in 1999 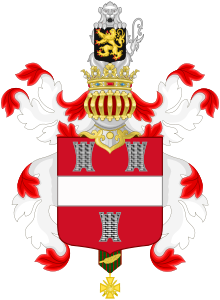 The coat of arms of Leuven, featuring a French Croix de guerre. Presumably to commemorate the sacking of Leuven by the Germans in 1914.

The Croix can be awarded to military units, as a manifestation of a collective Mention in Despatches. It is then displayed on the unit's flag. A unit, usually a regiment or a battalion, is always mentioned at the army level. The Croix is then a Croix de guerre with palm. Other communities, such as cities or companies can be also awarded the Croix.

When a unit is mentioned twice, it is awarded the fourragère of the Croix de guerre. This fourragère is worn by all men in the unit, but it can be worn on a personal basis: those permanently assigned to a unit, at the time of the mentions, were entitled to wear the fourragère for the remainder of service in the military.

Temporary personnel, or those who had joined a unit after the actions which had been mentioned, were authorized to wear the award while a member of the unit but would surrender the decoration upon transfer. This temporary wearing of the fourragère only applied to the French version of the Croix de guerre.

In the United States military, the Croix de guerre was commonly accepted as a foreign decoration. In the modern age, however, it remains one of the most difficult foreign awards to verify entitlement. This is because the Croix de guerre was often presented with original orders only and rarely entered into a permanent service record. The unit award was virtually never entered into U.S. records, especially since in most cases it was considered a temporary decoration which was surrendered when an individual departed a unit. An added complication is that the 1973 National Archives Fire destroyed a large number of World War II personnel records, meaning that there are very few sources from which to verify a veteran's entitlement to the Croix de guerre.

In World War II, the 440th AAA AW Battalion (Anti-Aircraft Artillery - Automatic Weapons) of the U.S. Army received the French Croix de guerre Unit Citation for stopping the German Ardennes counter-offensive in holding the town of Gouvy, Belgium for 4 1/2 days at the beginning of the Battle of the Bulge on December 16, 1944. Gouvy is midway between St. Vith and Bastogne. Commanding Officer of the unit, Lt. Col. Robert O. Stone, and Pfc. Joseph P. Regis of the unit, received the Croix de guerre Avec Palme.

Today, members of United States 5th Marine Regiment and 6th Marine Regiment, the Army's 2nd Infantry Division, the Army's 3rd Infantry Division, the Army's 3rd Squadron - 4th Cavalry Regiment, and the Army's 1st Battalion - 28th Infantry Regiment, are authorized to wear a fourragère signifying that brigade's award of three Croix de guerre during the World War I, but only while that individual is assigned to the unit. The wearing of the decoration is considered ceremonial and the fourragère is not entered as an official military award in permanent service records.

Individuals in World War I 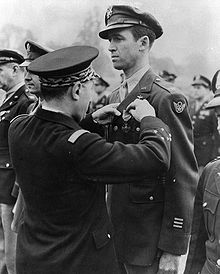 Col. Jimmy Stewart being awarded the Croix de guerre with palm, in 1944.

During the First World War a homing pigeon named Cher Ami (Dear friend) saved the lives of 194 American soldiers by carrying a message across enemy lines in the heat of battle. Cher Ami was shot in the chest and leg, blinded in one eye, losing most of the leg to which the message was attached, but continued the 25 minute flight avoiding shrapnel and poison gas to get the message home. Cher Ami was awarded the French 'Croix de Guerre' with Palm for heroic service. Later died from the wounds received in battle and is now enshrined in the Smithsonian Institution.[5]