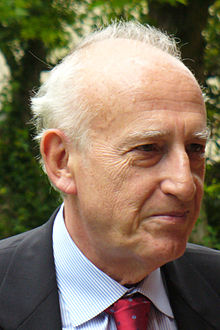 Pollini was born in Milan to the Italian rationalist architect Gino Pollini. Maurizio studied piano first with Carlo Lonati, until the age of 13, then with Carlo Vidusso, until he was 18. He received a diploma from the Milan Conservatory and won both the International Ettore Pozzoli Piano Competition in Seregno (Italy) in 1959 and the International Chopin Piano Competition in Warsaw in 1960. Arthur Rubinstein, who led the jury, declared Pollini the winner of the competition, saying: "that boy can play the piano better than any of us".[1] Soon afterwards, he studied with Arturo Benedetti Michelangeli.

Since the mid-1960s, he has given recitals and appeared with major orchestras in Europe, the United States, and the Far East. He made his American debut in 1968 and his first tour of Japan in 1974.

In 1985, on the occasion of Johann Sebastian Bach's tricentenary, he performed the complete first book of The Well-Tempered Clavier. In 1987 he played the complete piano concertos of Ludwig van Beethoven in New York with the Vienna Philharmonic under Claudio Abbado and received on this occasion the orchestra's Honorary Ring. In 1993-94 he played his first complete Beethoven Piano Sonata cycles in Berlin and Munich and later also in New York, Milan, Paris, London and Vienna. At the Salzburg Festival in 1995 he inaugurated the "Progetto Pollini", a series of concerts in which old and new works are juxtaposed. An analogous experience was done at Carnegie Hall in 2000-01 with "Perspectives: Maurizio Pollini".

While known for possessing an exceptional technique, Pollini is sometimes accused of emotional conservatism. He has conducted both opera and orchestral music, sometimes leading the orchestra from the keyboard in concertos.

In 1996, he received the Ernst von Siemens Music Prize. In 2001, his recording of Beethoven's Diabelli Variations won the Diapason d'or. In 2007, Pollini received the Grammy Award for Best Instrumental Soloist Performance (without orchestra) for his Deutsche Grammophon recording of Chopin nocturnes. He was awarded the Praemium Imperiale in 2010.[2]