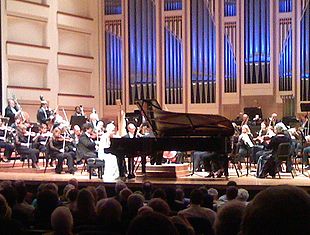 A piano concerto is a concerto written for piano and orchestra. See also harpsichord concerto; some of these works are occasionally played on piano. Joseph Haydn and Thomas Arne wrote concertos for fortepiano or harpsichord, at the period of time when they were in common usage (the late 18th century).

As the piano developed and became accepted, composers naturally started writing concerti for it. This happened in the late 18th century and so corresponded to the Classical music era. The most important composer in the development of the form in these early stages was Wolfgang Amadeus Mozart. Mozart's body of masterly piano concerti put his stamp firmly on the genre well into the Romantic era.

Mozart wrote many of his 27 piano concertos for himself to perform (he also wrote concerti for two and three pianos). With the development of the piano virtuoso many composer-pianists did likewise, notably Ludwig van Beethoven, Carl Maria von Weber, Frédéric Chopin, Franz Liszt, Camille Saint-Saëns, Sergei Rachmaninoff and Sergei Prokofiev, and also the somewhat lesser-known Johann Nepomuk Hummel and John Field. Many other Romantic composers wrote pieces in the form, well known examples including the concerti by Robert Schumann, Edvard Grieg, Johannes Brahms, and Pyotr Ilyich Tchaikovsky. Edward Elgar made sketches for a piano concerto but never completed it.

In the 19th century, Henry Litolff blurred the boundary between a piano concerto and symphony in his five works entitled Concerto Symphonique, and Ferruccio Busoni added a male choir in the last movement of his hour-long concerto. In a more general sense, the term "piano concerto" could extend to the numerous often programmatic concerted works for piano and orchestra from the era – Beethoven's Choral Fantasy, Liszt's Totentanz and Ruins of Athens Variations, and Richard Strauss's Burleske are only a few of the hundreds of such works.

The few well-known piano concerti which dominate today's concert programs and discographies account for only a minority of the repertoire which proliferated on the European music scene during the 19th century.

The piano concerto form survived through the 20th century into the 21st, with examples being written by Arnold Schoenberg, Béla Bartók, Igor Stravinsky, Sergei Prokofiev, Maurice Ravel, George Gershwin, Michael Tippett, Charles Wuorinen, York Bowen, Dmitri Shostakovich, Samuel Barber, Witold Lutosławski, Gian Francesco Malipiero, Peter Mennin, György Ligeti, Elliott Carter, Selim Palmgren, and others. In parts of other 20th century symphonic works the piano is given occasional prominence like any other instrument of the orchestra, as in the Symphony in Three Movements by Igor Stravinsky, Samuel Barber's violin concerto, and the Symphony No.3 by Michael Tippett.

Works for piano left-hand and orchestra

The German Paul Wittgenstein, who lost his right arm during World War I, on resuming his musical career asked a number of composers to write pieces for him which required the pianist to use his left hand only. The Czech Otakar Hollmann, whose right arm was injured in the war, did likewise but to a lesser degree. The results of these commissions include concertante pieces for orchestra and piano left hand by Bortkiewicz, Britten, Hindemith, Janáček, Korngold, Martinů, Prokofiev, Ravel, Franz Schmidt, Richard Strauss, and others.

Works for two and more pianos and orchestra

A classical piano concerto is often in three movements.

Examples by Mozart and Beethoven follow this model, but there are many others which do not. Beethoven's fourth concerto includes a last-movement cadenza, and many composers have introduced innovations – for example Liszt's single-movement concerti.