The original logo of the show.

Big Brother 1, known at the time as Big Brother 2000 (much like the international versions, which do not use numbers to classify each season, but the year they were broadcast), is the debut season of the American version of the international reality show Big Brother. It was the first series to be broadcast in English, premiering only days before the British version (however in the British version, the housemates had gone into the house 5 days prior to the start of Big Brother in the US). Sixty-seven episodes aired from July 5 to September 29, 2000. Julie Chen, a host of CBS This Morning and The Early Show, was named the host.

Although the success of Survivor: Borneo in the summer of 2000 is generally seen as the forerunner to the reality show trend which followed, Big Brother was the only other major network reality show to be airing at that same time.

Although later seasons of the show followed a radically different format, the debut season of Big Brother followed the same format as the other international versions of the show.

Each week the HouseGuests would nominate two fellow HouseGuests for banishment. The two HouseGuests with the most nominations were then put up for a vote by the viewing public who selected which HouseGuest to be banished, via a 900 number. However, problems with the public voting system included the fact that the most controversial contestants were banished (evicted) early in the game, leaving the least colorful contestants in the house. Also, the 900 number allowed for mass voting and in one memorable week contestant George's family and his hometown of Rockford, Illinois organized a mass-voting campaign to flood the phone lines in his favor.

Unlike in later seasons, the HouseGuests did not compete against each other for food or positions of power. Rather they had to undergo various tasks of endurance or problem-solving, such as puzzles, or dancing for a full day without stopping, and if successful it resulted in a reward.

Differences in Season One

This season featured unique rules or events not featured in any later season:

Redesign of show after Season One

Having spent millions to secure the American TV rights and construct a house for the show, CBS engineered a major overhaul for the second season. Paul Romer was removed from the production, and the role of Endemol was greatly scaled back. Producers Arnold Shapiro and Allison Grodner were brought in and completely reworked the program.

While most international versions of the show, including Big Brother UK and Big Brother Australia, still follow this original "fly on the wall" format, only the US version moved to a more strategy and competition-based show to better fit the format of American reality television. For example, in most international versions of the show, HouseGuests are actually forbidden from discussing nominations or voting plans, while in the US version it is highly encouraged.

In addition to the new rules and fewer recap shows per week, the ratings were boosted by casting stronger personalities and younger, attractive people making up the majority of the HouseGuests. 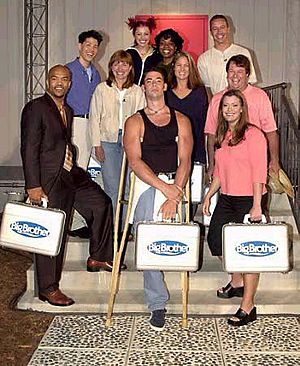 Brittany Petros from Robbinsdale, Minnesota, most known for her spunk and wildly varying hair color. Currently, Brittany is an actress and has done casting work for several reality shows. She was the fourth person to be sent home.

Cassandra Waldon is a communications director at the United Nations from Havre de Grace, Maryland. She was the fifth person sent home.

Curtis Kin is a lawyer from New York City currently employed with the Domestic Security and Immigration Crimes Section of the U.S. attorney’s office. Curtis was the second runner-up of Big Brother 1, winning $50,000.[2]

Eddie McGee was the winner of Big Brother 1 and $500,000. Eddie was from Commack, New York and became an amputee when he lost his leg to cancer prior to going on the show. Recently, Eddie has appeared in music videos for the band Fozzy. 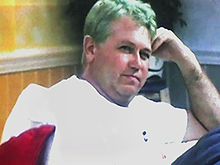 George in the lounge

George Allen Boswell, nicknamed Chicken George, was a roofer from Rockford, Illinois. After his time on the show, George quit the roofing business and began doing promotion jobs for the Tropicana Resort & Casino in Las Vegas, Nevada. At one point in the show, he tried to encourage his fellow housemates to walk out in protest of the show's rules.[3] In 2006, George moved into the Big Brother: All Stars house, but was evicted in the eighth week. George is now working for Mecum Auto Auctions, which has been featured on television's Discovery HD Theater.

Jamie Marie Kern (born July 16, 1977) is a beauty queen from Seattle, Washington. Kern graduated from Washington State University, and became Miss Washington USA in late 1999. She was marked for banishment in week 12, and was banished on Day 85. After Big Brother, Jamie appeared in an episode of Baywatch and has since become a reporter for a local television station. Kern graduated with an MBA from Columbia Business School in 2004, worked as an anchor for KNDU until 2006 and then moved Portland, Oregon where she worked for local Fox affiliate KPTV. She also hosted the Miss Washington USA 2006 pageant.

Jean Jordan, who went by her last name, Jordan, was an exotic dancer from Roanoke, Virginia. She was banished for making waves with the other contestants. Notably, Jordan was the only Big Brother contestant to receive major media coverage upon leaving the house. Unlike the Survivor contestants, Jordan was the only houseguest to appear on The Late Show with David Letterman and later went on to mock Big Brother in the media, noting what a bad show it was, and saying that she should have held out for Survivor: The Australian Outback. In one of the series' most memorable moments, Jordan went so far as to ridicule the theme song on the final episode, telling host Julie Chen "... You know, I'm just living like I'm living today, I'm feeling the thrill of life, and I'm not afraid, Julie."'

Josh Souza was the runner-up of Big Brother 1. Souza appeared on an episode of the show Blind Date and co-produced the film The Scorned, written and co-produced by fellow reality star Rob Cesternino (Survivor: The Amazon, Survivor: All Stars) with an all-reality-star cast.

Karen in the lounge

Karen Fowler, divorcee, was a contestant on Big Brother 1. She was most remembered for asking to divorce her husband on national television. She had also asked the television audience to vote for her to leave the Big Brother house since she missed her kids. Karen was marked for banishment in Week 6, and was banished on Day 43. Brittany revealed that Karen had moved to Los Angeles and settled there with her family. 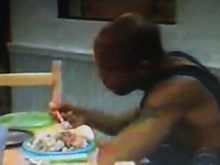 Will "Mega" in the Dining Room.

William Collins is a politician from Philadelphia, Pennsylvania who stood unsuccessfully for Philadelphia City Council.[4] William was the first person banished (evicted) in the history of the US version of Big Brother. He was known for being banished after he called out fellow houseguest Brittany Petros on her supposedly racist ways. He came back to the house for a few minutes, but by means of a prize that Eddie won for a sumo wrestling challenge by way of a massage. In the season finale, he was also critical of the show saying that without him, Big Brother was "Big Boring". The episode where he got banished it was revealed that he was a Black Panther.