Big Brother 4 is the fourth season of the reality television series Big Brother. The format of the program remained largely unchanged from previous seasons: a group of contestants, referred to as HouseGuests, are enclosed in the Big Brother House under the surveillance of cameras and microphones. Each week, the HouseGuests vote to evict one of their own until two Houseguests remain on finale night. The winner will be decided by the last seven evicted HouseGuests, collectively known as the Big Brother Jury. Julie Chen returned to host this season. The winner of the series won a $500,000 grand prize, while the runner-up won $50,000. This season was promoted as the "Ex-Factor". This season was also broadcast on E4 in the United Kingdom, beginning near the end of that country's fourth series.

On eviction night, all HouseGuests except for the Head of Household and the two nominees vote to evict one of the two nominees.[3] This compulsory vote is conducted in the privacy of the Diary Room by the host Julie Chen. In the event of a tie, the Head of Household must cast the deciding vote, announcing it in front of the other HouseGuests.[5] Unlike other versions of Big Brother, the HouseGuests may discuss the nomination and eviction process openly and freely.[3] The nominee with the greater number of votes will be evicted from the House on the live Thursday broadcast, exiting to an adjacent studio to be interviewed by Chen.[5] HouseGuests may voluntarily leave the House at any time and those who break the rules may be expelled from the house by Big Brother.[6][7] The final seven HouseGuests evicted during the season will vote for the winner on the season finale. These "Jury Members" will be sequestered in a separate house and will not be allowed to watch the show except for competitions and ceremonies that include all of the remaining HouseGuests. The jury members will not be shown any Diary Room interviews or any footage that may include strategy or details regarding nominations.[8] 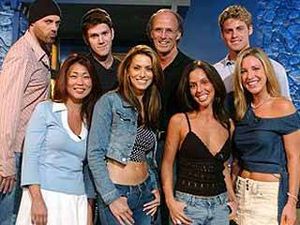 Thirteen HouseGuest were cast for this season of Big Brother. One of the original selections, Brandon, was kicked off of the show during the sequester period, after it was revealed he had communicated with his girlfriend. After his removal from the game, Jee was sent in as his replacement. As part of this seasons twist, five of the original eight Houseguests were shocked to find that an ex would be playing the game with them, as part of the "Ex-Factor" twist. The exes were Jun and Jee, Alison and Justin, Erika and Robert, David and Michelle, and Amanda and Scott.

The big twist for the year was The X-Factor. Eight HouseGuests were introduced, only to have five HouseGuests' exes compete against them in the game.[9]This quickly became messy, as Scott, a HouseGuest who had his ex-girlfriend (Amanda) move into the house, had a violent outburst, and subsequently told the House that he had a sexually transmitted disease. He was then disqualified and immediately expelled from the game.[10]

Another twist, introduced in the last veto contest of Big Brother 3, was the Golden Power of Veto, in that if a nominated person won such a veto, they would be allowed to take themselves off consideration for voting, which was not allowed when the veto was introduced originally the year before.

Yet another twist in the game occurred when Jun won HoH in Week 8 of the competition. The veto competition would be held before Jun would make her nominations. The reason being was that Jun, as HoH, won a special trip outside of the Big Brother House to attend the 20th Annual MTV Video Music Awards. Her disappearance (as she entered the Diary Room and never returned) played a part in the veto Competition, as the HouseGuests had to guess where Jun was.[11] Jun returned, and nominated Jee, her ex-boyfriend, and Alison. However, Alison won the veto, and used it on herself, forcing Jun to put Robert in her place. Despite Robert being a replacement for Alison, Jee was unanimously evicted 2-0. There was also a mixed-up order of events when Jee was HOH, as the Veto competition was held before nominations were made. Each houseguest was taken into the diary room one by one and offered the golden veto in exchange for forcing all of the other houseguests to eat peanut butter and jelly for different lengths of time. None of the houseguests took the deal except Jee who made everyone eat PB&J for a week. He received the veto to keep his nominations intact.

One last twist to the format included a jury of seven who would decide the outcome of the game. When the game got down to nine players, the evictees formed the jury. The jury format eliminated America's need to break a tie if necessary, as done before in Season 3 (though Lisa won 9-1). The sequestered jury was introduced after many outcry among fans when Danielle lost season 3 arguably due to evicted HouseGuests seeing her diary room sessions. From season 4 on, the sequestered jury saw only competitions, veto and nomination ceremonies, and evictions.

The final veto competition occurred at the final four, not at the final five like the previous year. The Diamond veto was of the utmost importance to the game. At the competition, Alison emerged victorious, winning the power to remove herself from the nomination block and casting the sole eviction vote. Despite having promised both Jun and Erika to take them to final two, Alison chose to evict Erika. The Diamond Veto was carried over to the next season, however it was simply called the Veto. It is still in use as of the current season.

The final Head of Household competition was in three parts. Alison beat Robert in the first part (the endurance portion) after having promised to take him to the final two. In the second part, Jun easily beat Robert by completing a mental challenge based on events that had taken place in the house. Therefore, Jun and Alison faced each other in part three of the competition, with both having pledged to take the other to final two. After eight questions based on their ex-boyfriends Jee and Justin, the women were tied on four correct answers apiece. The tiebreaker question was "How many days did you date your ex for?", to which Alison answered zero days and Jun answered one million. Therefore, Alison emerged as the final Head of Household for the season and chose to evict Robert from the house.

The jurors stated their disgust and disappointment with the conduct and gameplay of both Alison and Jun. Despite Alison's prowess in competitions, the jury in the end voted Jun as the winner of Big Brother 4 in a 6-1 vote. Jun received votes to win from Dana, Justin, Jack, Jee, Erika, and Robert, while Alison only received a vote from Nathan. Both finalists never had a single vote to evict over the whole season; Alison wasn't even permanently nominated once.

A record of the votes cast, stored in a voting-table, shows how each HouseGuest voted to evict throughout his or her time in the house. The Head of Household and the nominees are not allowed to vote, but in the event of a tie, the Head of Household will break it. Twists to the normal nominations process are noted, such as immunity from nomination and eviction (referred to as "exempt") and double evictions. The last seven evictiees of the season are part of the Jury of Big Brother 4. The seven Jury Members vote for the winner during the Finale.

Ten HouseGuests entered the house with an ex-boyfriend or ex-girlfriend, with whom he or she broke up prior to the show. These exes are indicated by matching colors in the chart. Beyond the personal effects of their histories and relationships, there was no direct effect on the mechanics of the game; exes were free to work with or against each other as they saw fit.

^Note 1 : Scott was expelled on day 8 after he had a violent outburst in the house, however nominations and evictions continued as usual. The Golden Power of Veto, introduced in Season 3, replaced the regular veto beginning with this season.
^Note 2 : In Week 8 the veto competition was held before Jun made her nominations, Jun won a trip outside the house and as part of the competition the other HouseGuests had to guess where Jun was.
^Note 3 : The Diamond veto was introduced, Alison won the Diamond veto and the power to remove herself from the nomination block and casting the sole eviction vote.
^Note 4 : In the final week, the HoH is the only HouseGuest eligible to vote for eviction since the other two HouseGuests are up for eviction by default.
^Note 5 : Votes in the finale are cast for the HouseGuests choice to win, not for who to evict. This season introduced the jury of seven; when the game got down to nine players, the seven evictees formed the jury. This eliminated the need for America to break a tie.