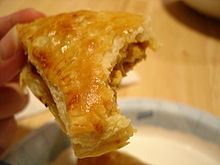 Curry puff (Malay: Epok-Epok, Karipap; Chinese: 咖哩角; Thai: กะหรี่ปั๊บ, RTGS: karipap, IPA: [karìːpáp]) is a Malaysian, Singaporean, and Thai snack. It is a small pie consisting of specialised curry with chicken and potatoes in a deep-fried or baked[1] pastry shell. The curry is quite thick to prevent it from oozing out of the snack.

A common snack in the region, the curry puff is one of several "puff" type pastries with different fillings, though now it is by far the most common. Other common varieties include sardines and onions or sweet fillings such as yam.

Some varieties of the South Asian samosa are very similar to curry puffs.[citation needed]

Curry puffs were introduced from 1511 by the Portuguese who called it Empanada. The original Malay word Epok-Epok is a corruption of Empanada.

In Malaysia, this snack is considered a Malaysian version of empanadas. Found in many stores, especially at Indian and Malay food stalls. Another Malay version of this snack is known as epok-epok and teh-teh which is smaller than the curry puff. Other varieties of the epok epok are filled with a half boiled egg instead of chicken. Another alternative is tinned sardines.

Manufacturers have developed a version of the curry puff that can be frozen and later reheated by the consumer. These are suitable for the export market and can be produced in volume for shipment to various regions, such as the Middle East, where there is demand. In addition, new fillings have been experimented with, including tuna and black pepper.

In Indian food stalls in Malaysia, it is quite common to find vegetarian curry puffs with potatoes, carrots and onions as fillings. The Malay curry puffs tend to be sweet-savoury while the Indian curry puffs are usually spicy.

Curry puffs are commonly seen in Singapore's Pasar Malams and other stalls in shopping centres. Additionally, the aforementioned epok-epok is a popular variation in some of Singapore's hawker centres, usually amongst Malay stalls. Alternatively, the more common type of curry puff has a thick or flaky English-style crust, with a mixture of Chinese and Indian styles in the filling.

They may also be categorized into hand-made or mass produced machine-made puffs. Both variations are popular in Singapore, although some might argue that the former is typically more delicious.

Besides the more "exotic" fillings mentioned, there are also more conventional flavours which are quite popular with the locals. These puffs are readily available in Singapore, which include sardine, black-pepper chicken and tuna fillings. For example, Pie Connection sells these hand-made puffs.

In Singapore, Old Chang Kee has been selling curry puffs for over 70 years and now has outlets all over Singapore, Malaysia, Indonesia and the Philippines. Other well-known brands include A1 Curry Puff and Sim Sun Pastries. Polar Puffs and Cakes introduced a version of the curry puff that uses Western puff pastry, which has a different taste and shape. This version of the curry puff can be found also at Delifrance in Singapore as Curry Chicken Feuillette.