"Shore crab" redirects here. This may also be used for crabs in the superfamily Grapsoidea.

Carcinus maenas is a common littoral crab, and an important invasive species, listed among the 100 "world's worst alien invasive species".[2] It is native to the north-east Atlantic Ocean and Baltic Sea, but has colonised similar habitats in Australia, South Africa, South America and both Atlantic and Pacific coasts of North America. It grows to a carapace width of 90 millimetres (3.5 in), and feeds on a variety of molluscs, worms and small crustaceans, potentially impacting a number of fisheries. Its successful dispersion has occurred via a variety of mechanisms, such as on ships' hulls, packing materials, bivalves moved for aquaculture, and rafting. 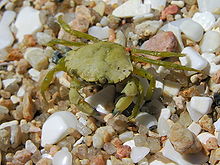 C. maenas has a carapace up to 60 millimetres (2.4 in) long and 90 mm (3.5 in) wide,[3] with five short teeth along the rim behind each eye, and three undulations between the eyes. The undulations, which protrude beyond the eyes, are the simplest means of distinguishing C. maenas from the closely related C. aestuarii, which can also be an invasive species. In C. aestuarii, the carapace lacks any bumps and extends forward beyond the eyes. Another characteristic for distinguishing the two species is the form of the first and second pleopods (collectively the gonopods), which are straight and parallel in C. aestuarii, but curve outwards in C. maenas.[3]

The colour of C. maenas varies greatly, from green to brown, grey or red. This variation has a genetic component, but is largely due to local environmental factors.[4] In particular, individuals which delay moulting become red–coloured rather than green. Red individuals are stronger and more aggressive, but are less tolerant of environmental stresses, such as low salinity or hypoxia.[5]

Rough map of the distribution of Carcinus maenas, blue areas are the native range, red areas are the introduced or invasive range, black dots represent single sightings that did not lead to invasion, and green areas are the potential range of the species.

C. maenas is native to European and North African coasts as far as the Baltic Sea in the east, and Iceland and central Norway in the north, and is one of the most common crabs throughout much of its range. In the Mediterranean Sea, it is replaced by the closely related species Carcinus aestuarii.

C. maenas was first observed on the east coast of North America in Massachusetts in 1817, and may now be found from southern Virginia northwards; by 2007, this species had extended its range northwards to Placentia Bay, Newfoundland.[6] In 1989, the species was found in San Francisco Bay, California, on the Pacific coast of the United States. Until 1993, it was not able to extend its range, but reached Oregon in 1997, the state of Washington in 1998 and British Columbia in 1999,[7][8] thus extending its range by 750 kilometres (470 mi) in ten years.[9] By 2003, C. maenas had extended to South America with specimens discovered in Patagonia.[10]

In Australia, C. maenas was first reported "in the late 1800s",[11] in Port Phillip Bay, Victoria. It has since spread along the south-eastern and south-western seaboards, reaching New South Wales in 1971, South Australia in 1976 and Tasmania in 1993. One specimen was found in Western Australia in 1965, but there have been no further discoveries in the area since.[11]

C. maenas first reached South Africa in 1983, in the Table Docks area near Cape Town.[12] Since then, it has spread at least as far as Saldanha Bay in the north and Camps Bay in the south, over 100 kilometres (62 mi) apart.

There have been appearances of C. maenas recorded in Brazil, Panama, Hawaii, Madagascar, the Red Sea, Pakistan, Sri Lanka and Myanmar; however, these have not resulted in invasions, but remain isolated findings. Japan has been invaded by a related crab, either C. aestuarii or a hybrid of C. aestuarii and C. maenas.[13]

It is believed, based on the ecological conditions, that C. maenas could eventually extend its range to colonise the Pacific coast of North America from Baja California to Alaska.[7] Similar ecological conditions are to be found on many of the world's coasts, with the only large potential area not to have been invaded yet being New Zealand; the New Zealand government has taken action, including the release of a Marine Pest Guide[14] in an effort to prevent colonisation by C. maenas. 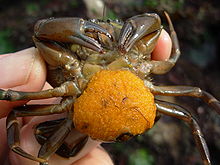 C. maenas can live in all types of protected and semi-protected marine and estuarine habitats, including habitats with mud, sand, or rock substrates, submerged aquatic vegetation, and emergent marsh, although soft bottoms are preferred. C. maenas is euryhaline, meaning that it can tolerate a wide range of salinities (from 4 to 52 ‰), and survive in temperatures of 0 to 30 °C (32 to 86 °F).[15] The wide salinity range allows C. maenas to survive in the lower salinities found in estuaries. A molecular biological study using the COI gene found genetic differentiation between the North Sea and the Bay of Biscay, and even more strongly between the populations in Iceland and the Faroe Islands and those elsewhere. This suggests that C. maenas is unable to cross deeper water.[16]

Females can produce up to 185,000 eggs, and larvae develop offshore in several stages before their final moult to juvenile crabs in the intertidal zone.[17] Young crabs live among seaweeds and seagrasses, such as Posidonia oceanica, until they reach adulthood.[18]

Argopecten irradians, a scallop which has been affected by the introduction of C. maenas

C. maenas is a predator, feeding on many organisms, particularly bivalve molluscs (such as clams, oysters, and mussels), polychaetes and small crustaceans.[19] They are primarily nocturnal, although activity also depends on the tide, and crabs can be active at any time of day.[20] In California, preferential predation of C. maenas on native clams (Nutricola spp.) resulted in the decline of the native clams and an increase of a previously introduced clam (the amethyst gem clam, Gemma gemma).[21] C. maenas has been implicated in the destruction of the soft-shell clam (Mya arenaria) fisheries on the east coast of the United States and Canada, and the reduction of populations of other commercially important bivalves (such as scallops, Argopecten irradians, and northern quahogs, Mercenaria mercenaria).[17] The prey of C. maenas includes the young of bivalves[22] and fish, although the effect of its predation on winter flounder, Pseudopleuronectes americanus is minimal.[23] C. maenas can, however, have substantial negative impacts on local commercial and recreational fisheries, by preying on the young of species, such as oysters and the Dungeness crab, or competing with them for resources.[24]

Cancer productus limits the spread of Carcinus maenas in parts of North America.

Due to its potentially harmful effects on ecosystems, various efforts have been made to control introduced populations of C. maenas around the world. In Edgartown, Massachusetts, a bounty was levied in 1995 for catching C. maenas, to protect local shellfish, and 10 tons were caught.[25]

There is evidence that the native blue crab in eastern North America, Callinectes sapidus, is able to control populations of C. maenas; numbers of the two species are negatively correlated, and C. maenas is not found in the Chesapeake Bay, where Callinectes sapidus is most frequent.[26] On the west coast of North America, C. maenas appears to be limited to upper estuarine habitats, in part because of predation by native rock crabs (Romaleon antennarium and Cancer productus) and competition for shelter with a native shore crab, Hemigrapsus oregonensis.[27] Host specificity testing has recently been conducted on Sacculina carcini, a parasitic barnacle, as a potential biological control agent of C. maenas.[28] In the laboratory, Sacculina settled on, infected, and killed native California crabs, including the Dungeness crab, Metacarcinus magister (formerly Cancer magister), and the shore crabs Hemigrapsus nudus, Hemigrapsus oregonensis and Pachygrapsus crassipes. Dungeness crabs were the most vulnerable of the tested native species to settlement and infection by the parasite. Although Sacculina did not mature in any of the native crabs, developing reproductive sacs were observed inside a few Metacarcinus magister and Hemigrapsus oregonensis. Any potential benefits of using Sacculina to control C. maenas on the west coast of North America would need to be weighed against these potential non-target impacts.[28]

Carcinus maenas was first given a binomial name, Cancer maenas, by Carl Linnaeus in his 1758 tenth edition of Systema Naturae.[30] An earlier description was published by Georg Eberhard Rumphius in his 1705 work De Amboinsche Rariteitkamer, calling the species Cancer marinus sulcatus, but this predates the starting point for zoological nomenclature.[30] A number of later synonyms have also been published:[30]

The lectotype chosen for the species came from Marstrand, Sweden, but it is assumed to have been lost.[30] In 1814, writing for The Edinburgh Encyclopaedia, William Elford Leach erected a new genus, Carcinus to hold this species alone (making it the type species of the genus, by monotypy).[30] In 1847, Nardo described a distinct subspecies occurring in the Mediterranean Sea, which is now recognised as a distinct species, Carcinus aestuarii.[1]