Old Town is today considered an affluent and historic neighborhood, home to many of Chicago's older, Victorian-era buildings.In the 1950s,the majority of this area was an enclave to the first Puerto Ricans to emigrate to Chicago. They referred to this area as part of "La Clark" until commercialization decorated late 1960s shop signs with the name of Old Town. The neighborhood is home to St. Michael's Church, originally a Bavarian-built church, and one of 7 to survive the path of the Great Chicago Fire. St. Michael's, Holy Name Cathedral, Immaculate Conception and St. Joseph's catered also to Latinos with Spanish speaking masses.

The neighborhood is also home to the famed The Second City improvisational comedy troupe. Many of the streets and alleys, particularly in the Old Town Triangle section, predate the Great Chicago Fire and do not all adhere to a typical Chicago grid pattern. In 1927, sculptors Sol Kogen and Edgar Miller purchased and subsequently rehabilited a house on Burton Place, near Wells Street, into the Carl Street Studios. Through the 1930s, an art colony emerged in the neighborhood as artists moved from the Towertown neighborhood near Washington Square Park.

Old Town was also home to many gays & lesbians from the 1920s through the 1980s. There were numerous gay bars lining Wells Street (all of them closed now). This was the first "gay ghetto" in Chicago, predating the current Lake View neighborhood (which is the current epicenter of gay life); the first homophile organization in American history, the Society for Human Rights, was established by Henry Gerber at his home on North Crilly Court in 1924. As the area gentrified, the gays moved further north to Lincoln Park and then Lake View neighborhoods.

Old Town has one Brown-Purple Line 'L' station at 1536-40 North Sedgwick Avenue. It is one of the oldest standing stations on the 'L'. 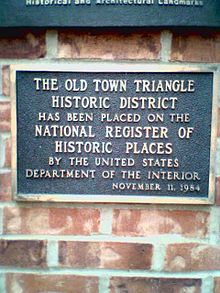 The land known as Old Town originally served as a home and trade center to many Nations including Potawatomi, Miami and Illinois.[2] Following the Treaty of Chicago in 1833, most of the indigenous people were forcibly removed, and the land was then settled in the 1850s by German-Catholic immigrants. Clark Street is a leftover of the culture, it being an old road which followed the high point next to Lake Michigan.

Old Town is home to many of Chicago's older, Victorian-era buildings. The neighborhood is also home to St. Michael's Church, originally a Bavarian-built church, and one of 7 to survive the path of the Great Chicago Fire.[3] Many of the streets and alleys, particularly in the Old Town Triangle section, predate the Great Chicago Fire and do not all adhere to a typical Chicago grid pattern.

In 1927, sculptors Sol Kogen and Edgar Miller purchased and subsequently rehabilitated a house on Burton Place, near Wells Street, into the Carl Street Studios. Through the 1930s, an art colony emerged in the neighborhood as artists moved from the Towertown neighborhood near Washington Square Park. 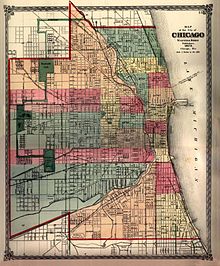 Old Town is in the upper right portion of this map of Chicago from 1875. Note how 'Sedgwick' is misspelled 'Sedgewick'.

During the 1960s the neighborhood was the center of the yippie and hippie counter culture in the midwestern United States. This was mostly because by the 1950s and 1960s many of the original families that had settled in the neighborhood had moved to the suburbs during white flight, leaving older, Victorian buildings with storefronts available to rent for cheap. This dense storefront-laden area (Wells & North Ave.) became the nexus of hippie culture, (as well as the newly emerging out-homosexual culture) and gave rise to the boutiques (Crate and Barrel for example) in the neighborhood today. Seed Magazine was a literary staple of the neighborhood at the time.

There is a little piece of Chicago Real Estate, west of Lincoln Park, that is the pride of urban conservationists and the despair of bulldozers. It is a community widely known as Old Town...Old Town is full of conflict, full of life; a sometimes maddening but always exciting place to live...It is important to stress that there is no such legal entity as Old Town. Old Town is where you make it.
—Richard Atcheson, Holiday Magazine March 1967[4]

I pointed out that it was in the best interests of the City to have us in Lincoln Park ten miles away from the Convention hall. I said we had no intention of marching on the Convention hall, that I didn't particularly think that politics in America could be changed by marches and rallies, that what we were presenting was an alternative life style, and we hoped that people of Chicago would come up, and mingle in Lincoln Park and see what we were about.
—Abbie Hoffman, from the Chicago 7 trial[5]

The film The Weather Underground has a scene on La Salle Avenue in Old Town, which describes the Zeitgeist of the era. 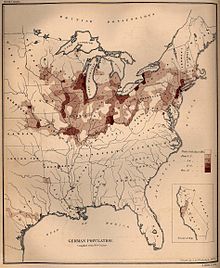 During the 1960s and 1970s Old Town became the center of Chicago folk music featuring singer-songwriters such as Bob Gibson, Steve Goodman, Bonnie Koloc, and John Prine playing at several clubs on Wells Street, such as The Earl of Old Town. The Old Town School of Folk Music was closely associated with these artists and clubs. The largest and most successful of the folk clubs was Mother Blues, which featured nationally known artists and groups such as Spanky and Our Gang, Jose Feliciano, Odetta, Oscar Brown, Jr, Bob Gibson, Josh White, and Chad Mitchell. It also presented comedian George Carlin, Sergio Mendez and Brazil '66, and The Jefferson Airplane.

A few of the institutions from the 1960s era still exist today, such as The Second City, the Old Town Ale House, Bijou Video, the Old Town School of Folk Music (which moved after the 1968 riots), the Up Down Tobacco Shop (which used to be located just south of its current location), and the Old Town Aquarium.

After the Martin Luther King assassination, and the subsequent riots, the neighborhood experienced a tense racial division during the 1970s and 1980s which left a de facto segregation between Old Town north of North Ave. and Old Town south of North Ave. In the early 2000s this trend has begun to shift towards a gentrification of the area south of North Ave. on Sedgwick, Blackhawk, Hudson and Mohawk streets, near the Marshall Field Garden Apartments. The area to the west of these streets, near the North and Clybourn Red Line stop has been dubbed "SoNo" by real estate developers. SoNo's boundaries are North Avenue, Halsted Street, Division Street and the North Branch of the Chicago River and it is not part of Old Town. Currently, Old Town south of North Avenue is a mixture of rich and poor, though is steadily gentrifying.[citation needed] The continued demolition of the Cabrini–Green housing projects to the south has led to significant demographic changes in the neighborhood.