Clube de Regatas do Flamengo
This article is about the football club. For the bairro, see Flamengo.

Clube de Regatas do Flamengo (from Dutch[1] vlamingen: flemish people, English: Flamengo Regatta Club),[2][3][4][5][6] also known as Flamengo and familiarly as Mengão,[7] is a Brazilian sports club based in the Flamengo bairro, Zona Sul, Rio de Janeiro, best known for its professional football team.[8] They play in the Campeonato Carioca,[9] Rio de Janeiro's state league, and the Campeonato Brasileiro Série A or Brasileirão,[10] Brazil's national league, and are one of the only five clubs to have never been relegated, along with Santos, São Paulo, Internacional and Cruzeiro.[11] Flamengo was a founding member of the Clube dos 13 (English: Club of the 13) group of Brazil's leading football clubs.[12][13] They are the current Carioca champions.[14]

The club was established in 1885, although it played its first official game in 1912. Flamengo have won the Brasileirão on six occasions, most recently in the 2009 season, the Copa do Brasil twice and the Campeonato Carioca a record 32 times. Due to its low capacity, Flamengo's home stadium, Gávea, is rarely used and the club ops for the government owned Maracanã, the biggest football stadium in Brazil, with a capacity of 82,238. Since the Maracanã is now going through a renovation to host the 2014 FIFA World Cup and 2016 Summer Olympics, the Engenhão is currently being used to host Flamengo matches.

Its traditional playing colours are scarlet and black hooped shirts with white shorts and red socks. In 1981, Flamengo became the first Carioca team to win the Copa Libertadores,[15][16][17] the most prestigious laurel in South American football.[18][19]: the team, subsequently known as the Geração de Ouro, defeated Cobreloa 2-0 in the Estadio Centenario in Montevideo to reach the pinnacle of their careers. That same year, Flamengo won the 1981 state title, completing the club's first ever double. The club has also won the Copa dos Campeões, Intercontinental Cup, Copa Ouro and Copa Mercosur once each. Flamengo also reached the final of the Supercopa Sudamericana in 1993 and 1995, but were beaten by São Paulo and Independiente, respectively.

Flamengo is the most popular team in Brazil, with over 36 million followers as of 2010,[20][21] and was voted by FIFA as one of the most successful football club of the 20th century. It is also one of Brazil's richest football clubs in terms of revenue, with an annual revenue of $75.5m (€52.6m), and the most valuable club in South America, worth over $357.2m (€248.7m) in 2011.[22] The club has long-standing rivalries with near neighbours Fluminense, Botafogo and Vasco da Gama.

The group used to gather at Café Lamas, in the Flamengo neighborhood of Rio de Janeiro, and decided to form a rowing team. Rowing was the elite sport in Rio de Janeiro in the late 19th century and the youngsters hoped having their own club would make them popular with the young ladies of the city's high society.

They could only afford a used boat named "Pherusa", which had to be completely rebuilt before it could be used in competition. The team debuted on October 6, 1895 when they sailed off the Caju Point, from the Maria Angu beach, heading off to Flamengo beach. However, strong winds turned over the boat and the rowers nearly drowned. They were rescued by a fishing boat named Leal ("Loyal"). Afterwards, as the Pherusa was undergoing repairs, the boat was stolen and never again found. The group then had to save up money to buy a new boat, the "Etoile", renamed "Scyra".

On the night of November 17, the group, gathered at Nestor de Barros's manor on Flamengo beach, founded the Flamengo Rowing Group ("Grupo de Regatas do Flamengo", in Portuguese) and elected its first board and president (Domingos Marques de Azevedo). The name was changed a few weeks later to "Clube de Regatas do Flamengo" ("Flamengo Rowing Club"). The founders also decided that the anniversary of the club foundation should be celebrated on November 15, so as to coincide with the Day of the Republic, a national holiday.

Flamengo only embraced football when a group of dissatisfied players from Fluminense Football Club broke away from the club following a dispute with the board. The players (Alberto Borghert, Othon de Figueiredo Baena, Píndaro de Carvalho Rodrigues, Emmanuel Augusto Nery, Ernesto Amarante, Armando de Almeida, Orlando Sampaio Matos, Gustavo Adolpho de Carvalho, Lawrence Andrews and Arnaldo Machado Guimarães) decided to join Flamengo because Borgeth, who was the team's captain, was also a rower for Flamengo. Admittance of the new members was approved on November 8, 1911. A motion against the club taking part in football tournaments was defeated, and the members assembly officially created the football team on December 24, 1911.

The new team used to train on Russel beach, and gradually gained the support of the locals, who closely watched their practice games. The first official match was played on May 3, 1912 and is, to this day, the most spectacular victory of the club, as the team defeated Mangueira 16 to 2. The first Fla-Flu (which would eventually become one of the most famous football derbies in the world) was also played in that year, on July 7, and was won by Fluminense, by 3–2.

In 1978 a scarlet-black Golden Age began when Flamengo won the Rio de Janeiro State Championship. The five following years would be years of glory. Stars such as Júnior, Carpegiani, Adílio, Cláudio Adão and Tita were led by Zico to become State Champions three times in a row. The level of sustained excellence pushed Flamengo towards its first Brazilian Championship in 1980. Then, as national champions, the club qualified to play the South American continental tournament – the Libertadores Cup.

1981 is a benchmark year in Flamengo's history. After beating Chilean Cobreloa in three matches, the club became South American Champions. The next goal was clear: the Intercontinental Cup, a single match to be played in Tokyo's Olympic Stadium, Japan, against European Champions' Cup winner Liverpool FC.

On December 13, 1981, Raul, Leandro, Marinho, Mozer, Júnior, Andrade, Adílio, Zico, Tita, Nunes and Lico took the field for the most important match in club history. Two goals by Nunes and another one by Adílio (all during first half) along with a brilliant performance by Zico were more than enough to crown Flamengo the first Brazilian World Champions club since Pelé's Santos FC, shutting out Liverpool 3–0.

The next two years would also be great. Another Rio's State Championship in 1981 and two Brazilian Championships – 1982 and 1983 – closed the Golden Age in a fantastic way.

In the 2007 Brazilian Football Championship, Flamengo surprised all the other teams at the half of the season winning many games at home, leaving the relegation zone and reaching the second place and then being defeated the last match in Recife, Pernambuco by Náutico 1–0. After this match, Flamengo finished the League in third place, climbing from second worst to third best.[citation needed]

Flamengo started the year by winning the Rio de Janeiro State Championship over arch rival Botafogo. However a couple of days later, in the late rounds of Libertadores Cup, the team was eliminated at home by Club América from Mexico. In this very day, Joel Santana, a well appreciated coach by Flamengo fans, coached his last match before taking South Africa National Football Team. Experts say that the team was eliminated because the finals against Botafogo took a heavy toll on the players stamina and endurance for the matchup against América. The 0–3 score was the biggest headline in the soccer world in the following day as Flamengo had won easily 4–2 in Azteca Stadium. The elimination at Maracanã was labeled by the world press as a second "Maracanazo".[citation needed]

After finishing the 1st phase of the Brazilian League in 10th place, Flamengo won the Brazilian Série A with a terrific campaign in the 2nd phase, the championship was decided in the very last game with a 2–1 win against Grêmio at Maracanã Stadium, with this victory the Flamengo became six times Brazilian League Champion.[23]

After signing their new big star, Ronaldinho, Flamengo were looking for a strong start to their season. The fans were not to be disappointed when Flamengo ran out 4–0 winners of Avaí, with Ronaldinho putting in a man of the match performance contributing a goal and an assist. Flamengo played against Santos FC in the twelfth round and won 5-4 with a hat-trick from Ronaldinho after they were down 3-0 at the end of the first half.

As of October 2011, according to combined sources on the official website.[30]

Youth players able to play in the first team 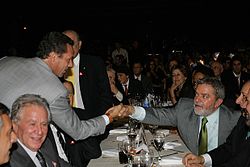 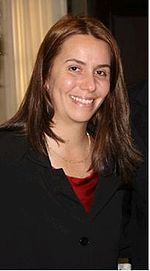 Flamengo's home stadium is nominally the José Bastos Padilha Stadium (also known as Gávea Stadium), which was inaugurated on September 4, 1938 and has a capacity of 8,000 fans. Lately Gávea Stadium has been used only as the first team's training ground. Most games, however, are played in Maracanã Stadium, considered by the supporters as the real Flamengo's home ground.[42]

Inside view of Maracanã

Average attendances at Maracanã including friendly matches and other competitions.[45][46] 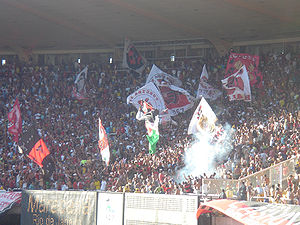 Regularly thousands of supporters show the strength of the scarlet-black nation, having the biggest number of highest average attendances per season between all the Brazilian clubs. Out of 38 editions of the Brasileirão, Flamengo held the average attendance record on 12 occasions. Atlético Mineiro are the closest followers, having the biggest average attendances nine times. From 1971 to 2006, Flamengo took an average 25.989 supporters per match to the Maracanã. It has to be noted that 2007 and 2008, both years in which Flamengo had an average of over 40.000 supporters per match (and thus both would raise the historical average number), were not counted yet.

Besides Rowing and Football, Clube de Regatas do Flamengo also plays an active role in several Olympic sports, such as:

Usually, in Brazil, each team has their own torcidas organizadas (like Europeans Ultras). Flamengo, like any other Brazilian team has groups of organized supporters, most notably Torcida Jovem-Fla, Charanga Rubro-Negra,Urubuzada, Flamanguaça and Raça Rubro-Negra.

Flamengo is known for being the most popular team in Brazil. Surveys show that there are over 35 million people supporting Flamengo all around Brazil. Because of that Flamengo supporters are known as "Nação Rubro Negra", meaning Red & Dark Nation, since there are more supporters than the population of many countries. Flamengo supporters are also known for their fanaticism about the club and they hold several records in the Brazilian league like having the best average attendance (12 times, the second one is Atlético Mineiro with 9), or the match with the greatest numbers of attendants between two football clubs. Flamengo played against Santos in the Maracanã stadium watched by 155,523 supporters in the Brazilian League final of 1984, however some say that the official numbers are wrong and that there were more than 160,000 people in Maracanã. Flamengo's match with the greatest number of attendants was Flamengo x Fluminense in Carioca Championship of 1963, with 194603 spectators. There are 13 times in which Flamengo has took more than 150,000 people in the stadium in official matches. Flamengo supporters were listed as heritage of the people by the Mayor Office of the city of Rio de Janeiro in 2007.