Facioscapulohumeral muscular dystrophy (sometimes switched as faciohumeroscapular) (FSHMD, FSHD or FSH), which is also known as Landouzy-Dejerine,[1] is a usually autosomal dominant inherited form of muscular dystrophy (MD)[2] that initially affects the skeletal muscles of the face (facio), scapula (scapulo) and upper arms (humeral). While it is widely stated to be the third most common genetic disease of skeletal muscle, a 2008 analysis of rare diseases listed FSHD as the most prevalent form of MD at 7/100,000.[3]

Symptoms may develop in early childhood and are usually noticeable in the teenage years with 95% of affected individuals manifesting disease by age 20 years. A progressive skeletal muscle weakness usually develops in other areas of the body as well; often the weakness is asymmetrical. Life expectancy is normal, but up to 15% of affected individuals become severely disabled and eventually must use a wheel chair. Non-muscular symptoms frequently associated with FSHD include subclinical sensorineural hearing loss and retinal telangectasias.

In more than 95% of known cases, the disease is associated with deletions of the D4Z4 repeat in the 4q35 subtelomeric region of Chromosome 4. Seminal research published in August 2010 now shows that a second mechanism is needed for FSHD, which for the first time provides a unifying theory for the underlying genetics of FSHD. The second mechanism was found to be a "toxic gain of function" of the DUX4 gene which is the first time in the history of genetic research that a "dead gene" has been found to "wake up" and cause disease.[4][5]

FSHD was first described in 1884 by French physicians Louis Landouzy and Joseph Dejerine. In their paper of 1886, Landouzy and Dejerine drew attention to the familial nature of the disorder and mentioned that four generations were affected in the kindred that they had investigated.[7] Formal definition of FSHD's clinical features didn't occur until 1952 when a large Utah family with FSHD was studied. Beginning about 1980 an increasing interest in FSHD led to increased understanding of the great variability in the disease and a growing understanding of the genetic and pathophysiological complexities. By the late 1990s, researchers were finally beginning to understand the regions of Chromosome 4 associated with FSHD.[8]

FSHD is also known by the following names:

The exact pathophysiology of FSHD remains unknown as of March 2007. Muscle histologic changes are nonspecific for the muscle wasting. There is evidence of early inflammatory changes in the muscle, but reported responses to high dose open labeled corticosteroid treatment have been negative. Animal studies of anabolic effects of beta adrenergic agonists on models of muscle wasting led to an open trial of salbutamol (a beta adrenergic agonist) in which limited preliminary results support an improvement of muscle mass and strength in FSHD. Preliminary studies of muscle cultures suggest an increased sensitivity to oxidative stress, but require further exploration.

More than 95% of cases of FSHD are associated with the deletion of integral copies of a tandemly repeated 3.2kb unit (D4Z4 repeat) at the subtelomeric region 4q35 on Chromosome 4 of the Human genome of which a normal chromosome will include between 11-150 repetitions of D4Z4.[8] There are both heterochromatin and euchromatin structures within D4Z4 and one putative gene called DUX4.[8][9] Inheritance is autosomal dominant, though up to one-third of the cases appear to be the result of de novo (new) mutations. The heterochromatin is specifically lost in the deletions of FSHD while the euchromatin structures remain.[8] If the entire region is removed, there are birth defects, but no specific defects on skeletal muscle. Individuals appear to require the existence of 11 or fewer repeat units to be at risk for FSHD. .

In addition, a few cases of FSHD are the result of rearrangements between subtelomeric chromosome 4q and a subtelomeric region of 10q. This location contains a tandem repeat structure highly homologous to 4q35.[10] Disease occurs when the translocation results in a critical loss of tandem repeats to the 4q site.

Finally, there is a large family with a phenotype indistinguishable from FSHD in which no pathological changes at the 4q site or translocation of 4q-10q are found.[11][12]

It has been suggested that this may be due to limitations in the available tests.[13]

On 19 August 2010, a paper entitled A Unifying Genetic Model for Facioscapulohumeral Muscular Dystrophy was published in Science showing that the candidate gene DUX4 undergoes a "toxic gain of function" as a result of single nucleotide polymorphisms in the region distal to the last D4Z4 repeat. According to the research, this leads to a "canonical polyadenylation signal for transcripts derived from DUX4".[5] This is the first time in the history of genetics in which "junk" DNA has been shown to reanimate and cause disease. The documentation of the conditions under which the DUX4 gene became reanimated answered the question of why no one whose dead gene was repeated more than 10 times ever got FSHD but only some people with fewer than 10 copies did get the disease[4] Several organizations including the New York Times highlighted this research (See MDA, FSH Society, University of Rochester, NYT).

Dr. Francis Collins, who oversaw the first sequencing of the Human Genome with the National Institutes of Health stated:[4]

“If we were thinking of a collection of the genome’s greatest hits, this would go on the list,”

"This is a long-sought explanation of the exact biological workings of a disease that affects an estimated one in 14,000 or 22,100 Americans and 490,000 worldwide,” he said, adding that this discovery “creates an enormous opportunity for research to develop ways to prevent or treat FSHD.”

The MDA stated that:

"The new findings will make it easier to diagnose FSHD in someone with symptoms and predict who will develop the disease in someone without symptoms. Now, the hunt is on for which proteins or genetic instructions (RNA) are causing the problem for muscle tissue in FSHD."

“It is amazing to realize that a long and frustrating journey of almost two decades now culminates in the identification of a single small DNA variant that differs between patients and people without the disease. We finally have a target that we can go after.”

The original identification of the D4Z4 deletions was found in 1992. This research now shows that a second mechanism is needed for FSHD to be present and that the remaining versions of the DUX4 become more active (open for transcription) because the DNA at the tip of chromosome 4 is less tightly coiled as a result of the deletions.

Since the early 2000s genetic testing that measures the size of the D4Z4 deletions on 4q35 has become the preferred mechanism for confirming the presence of FSHD. As of 2007, this test is considered highly accurate but is still performed by a limited set of labs in the US, such as Athena diagnostics under test code 405. However, because the test is expensive, patients and doctors may still rely on one or more of the following tests, all of which are far less accurate and specific than the genetic test:[14] 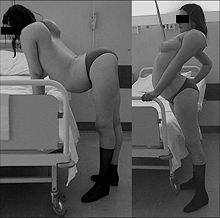 Because of the extreme variability of the disease, an authoritative and scientifically confirmed set of symptoms does not yet exist. The prevalence is widely quoted to be 1/20,000, but the exact prevalence is not known. A November 2008 report from Orpha.net, an organization backed by the Institut National de la Santé et de la Recherche Médicale (INSERM), lists a prevalence of 7/100,000 which would make FSHD the most prevalent form of Muscular Dystrophy (Duchene and Becker are listed at 5/100,000).[3]

ACVR2B is a compound identified in 2005/2006 by Johns Hopkins[1]. It increased muscle mass in a non-Muscular Dystrophy Mouse by up to 60% in two weeks.

MYO-029 is an experimental myostatin inhibiting drug developed by Wyeth Pharmaceuticals for the treatment of muscular dystrophy. Myostatin is a protein that inhibits the growth of muscle tissue, MYO-029 is a recombinant human antibody designed to bind and inhibit the activity of myostatin.[15] A 2005/2006 study was completed by Wyeth in Collegeville, PA and included participants afflicted with FSHD. The study could not prove its efficacy.

In 2007 the FSHD Global Research Foundation was established to increase the amount of funding available to research bodies. The Foundation has identified 13 priority areas of interest for FSHD research.[16]

In 2009 the FSHD-EUROPE was founded by European associations.[17]