Television in Germany began in Berlin on March 22, 1935, broadcasting for 90 minutes three times a week. The German television market had approximately 36.5 million television households in 2000, making it the largest television market in Europe.[1] All important German TV channels are free-to-air.

Main articles: History of television in Germany and Broadcasting in East Germany

In 1948 the British occupation forces allowed NWDR to broadcast television programs for the British zone. Other regional networks also started to launch television in their own areas. Meanwhile, the GDR was launching its own television service, based on the Soviet model.

A regular schedule began through the cooperation of all ARD members in 1954. Basic principles in the central areas of entertainment, information and enlightenment were established and television plays developed as the medium's own specific art form. Improvements in technology and programming, as well as reduced prices, led to a steady increase in licence holders, and the number of licenses passed the 1-million mark in October 1957.

On April 1, 1963, the long-promised second TV network, the Zweites Deutsches Fernsehen (Second German Television) started. Unlike ARD, which was regionalized and had its roots in radio, ZDF was a centrally organized channel devoted solely to television. On August 25, 1967, at 9:30 a.m. on both ARD and ZDF, vice chancellor Willy Brandt started the era of colour TV in West Germany by pressing a symbolic launch button at the International Radio and TV Fair in West Berlin.

East Germany started DFF2 in 1969, and introduced colour programming on both channels. In 1972, the DFF was renamed, dropping the pretense of being an all-German service and becoming Fernsehen der DDR (GDR Television) or DDR-FS. Its two channels became known as DDR1 and DDR2.

The first two privately financed TV networks, RTL plus (short for Radio Television Luxemburg) and SAT 1, started their programming in West Germany in 1984. (Previously RTL broadcast from Luxembourg but was only received in parts of Southwestern Germany).

After reunification, the TV stations of the German Democratic Republic were dissolved and the remnants were used to found new regional networks, e.g. the Mitteldeutscher Rundfunk (Central German Broadcasting), as part of the ARD. In addition, more private TV stations opened, becoming available through cable, satellite, and in some cases, over the airwaves.

Today, with almost 40 million TV households, 365 TV channels licensed in Germany and a total market volume of € 9,615 million in 2008, Germany represents one of the biggest and most diversified TV markets in the world. The strongest revenue segment in Germany is public funding (€ 4,430 million in 2008), followed by advertising (€ 4,035 million) and subscription (1,150 € million).[2] This dominant market position of public and ad funded free TV channels in Germany explains, why the German pay TV segment is significantly underperforming in an international comparison.[3]

In terms of total TV viewing market share Germany's market leaders in 2009 were again the two biggest PBS channels (ARD with 12,7% and ZDF with 12,5%) and the two leading commercial channels (RTL with 12,5% and Sat.1 with 10,4%).[4] The leading pay TV provider was Premiere, which was renamed into Sky Germany in early 2010 (see below). The biggest teleshopping providers in Germany are QVC and HSE24.

Terrestrial reception had lost most of its users by the 1990s[citation needed] due to extensive cable and satellite coverage. In a two step process analogue terrestrial TV broadcasting in the states of Berlin and Brandenburg was switched off in 2003 and replaced by DVB-T, in 2005, about two-third of Germany's states began to replace analogue transmission. By 2006, all metropolitan and most rural areas had moved to digital transmission. Analogue broadcasting is to be completely terminated by 2010.

While the public broadcasters ARD and ZDF transmit throughout Germany, commercial stations are only available within metropolitan areas, so the number of available channels varies between about 10 and 30. All channels are free-to-air and the broadcasters rent transmission services directly from a transmitter operator, usually Deutsche Telekom. ARD stations also use their own transmitters. 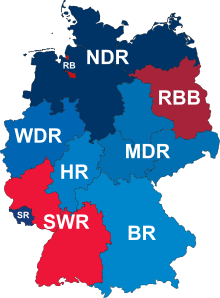 As stated above, the ARD was the first German broadcasting station. It has a federally oriented structure. At present, nine regional TV stations cooperate to produce programs for the TV network known as Das Erste (The First):

Some small regions, such as Bremen and the Saarland, have their own broadcasting stations, mainly for historical reasons. They only contribute to the nationwide TV program Das Erste and have limited regional TV programs.

Digital satellite television has been available in Germany since 1996. Most of the 30+ TV stations broadcast their satellite signal in both analogue and digital (DVB-S) forms. There is currently a single Pay TV satellite operator in Germany - Sky. Prior to being known as Sky, it was named Premiere.[7] It, (with its former owner Leo Kirch), got into serious fiscal trouble due to its early and proprietary (Betacrypt, d-box) enforcement of DTV. Later it was reformed and renamed to Sky, now being owned by News Corporation.

German channel group ProSieben showed a BBC documentary and a self produced TV movie in the autumn/fall of 2004, and the Hollywood films Spider-Man and Men in Black II in March 2005 using 1080i, MPEG-2 and DVB-S. These were intended to be a test for future commercial HD services.

Regular programming of the HD versions of ProSieben and Sat.1, both free to air, began on October 26, 2005. Most programming is upscaled SD material. Unlike the test broadcasts, DVB-S2 and MPEG-4 AVC is now used. This is what the major pay TV service Premiere announced it was using.

Premiere itself, after several delays, finally started broadcasting three HD channels — one each dedicated to films, sports and documentaries — in November 2005, although there were virtually no suitable, certified receivers available on the market. The content is sparse and thus often repeated. Sky (formerly Premiere) reuses its proprietary digital rights management system embedded into its content scrambling system (Nagravision) from SD broadcasts to block analogue output of the movie channel from the receiving set-top box altogether, only allowing HDCP-secured transmissions; the other channels are less restricted.

For the time being, neither of the services is available via DVB-T nor DVB-C.

German producers and hardware companies hoped for a breakthrough of HDTV sales just before the FIFA World Cup 2006 was broadcast in HDTV on Premiere, and via cable. Much canvassing was carried out at the International Funkaustellung (IFA) 2005 in Berlin. However, sales of flat-screen TVs did not pick up as much as anticipated.

As of 2011, Free-To-Air HDTV is broadcast via Cable and Satellite on 4 channels, Das Erste HD, ZDF HD, Arte HD and Anixe HD. ProSiebenHD and Sat1HD have stopped unencrypted broadcasting in 2008;[8] however, broadcasting resumed in HD (now encrypted) nunder the [HD+] brand, along with the other private channels: Kabel 1, Sixx, RTL, RTL II, Vox and Sport 1. All channels are broadcast using the h.264 codec; most material as of April 2011 remains upscaled SD material.

The channels with the largest viewing share in 2010 are: [9]

Cable transmission is still mostly analog with usually about 30 available channels. DVB-C transmission started in 2004 with pay TV Premiere and digital versions of the analogue channels.

The rather late changeover to DVB was caused both by the long process of selling the infrastructure of former monopolist Deutsche Telekom to others and the fact that the cable network ends at the curb or property, with the in-house cable in large apartment buildings being operated by a different company. Due to this, the new owners of Deutsche Telekom's cable network were in many cases not able to offer new products directly to the viewer.

By 2006, there were three major cable operators, Unity Media in Hesse and North Rhine-Westphalia, Kabel BW in Baden-Württemberg and by far the largest, Kabel Deutschland in the other 13 states. Today, all companies offer about 200 TV channels by DVB-C, which includes some 70 channels at no extra charge as well as a number of pay-per-view offers and subscription-based packages. In addition to that pay TV broadcasters Premiere (various genres) and, in some networks, Arena (offering Germany's premiere soccer league) are available.

In some very large apartment complexes a number of local and national companies operate an in-house cable network which is fed solely by its own satellite antenna on the building, not the local cable operator. The satellite channels are either transcoded into analogue transmission, receivable by any TV set without extra equipment, or into DVB-C.

The heyday of Germany's sole subscription channel Premiere was about the time of the millennium. Premiere offered telecasts of Germany's soccer Bundesliga. The "Bundesliga" was Premiere's cash-cow, but they lost the broadcasting rights in 2006 to a newly formed competitor - Arena. Premiere was the brainchild of the former television czar, Leo Kirch. He went into insolvency after a decade of losing viewers from his subscription channel, DF1 (Digital TV 1). The company re-gained some ground with its new manager Georg Kofler and now tries to get viewers back by purchasing new international shows from overseas and introducing them to the German audience (ABC's Lost was first shown on Premiere). Kofler and Kirch bought international movies from American film studios in advance so they could broadcast them one year after their release. Normally, American movies are shown on non-subscription (free-TV) channels three years after their release. Premiere highlights a combination of multiple channels featuring Animal Planet, the Discovery Channel and the Disney Channel; plus several themed channels for music, crime and sport.

Several German cable companies created a new challenger to Premiere in 2005 - called ARENA. The participating companies are iesy (Hesse) and ish (TV) (North Rhine-Westphalia) through their combined partnership called "Unity Media". Arena, a rather small company, wanted to buy the pay-TV rights to the German Bundesliga and won by a decision of the marketing directorate of the DFL. The Bundesliga is regarded as lucrative on the German television market, so previous rights holders Premiere suffered a wounding blow to their concept of broadcasting. Arena held the rights from 2006 to 2008. Further negotiations were due in 2008 for the broadcasting of the Bundesliga.