Created in 1966 as the Michigan Educational Research Information Triad by Michigan State University (MSU), the University of Michigan (U-M), and Wayne State University (WSU),[2] Merit was created to investigate resource sharing by connecting the mainframe computers at these three Michigan public research universities. Merit's initial three node packet-switched computer network was operational in October 1972 using custom hardware based on DEC PDP-11 minicomputers and software developed by the Merit staff and the staffs at the three universities.

Over the next dozen years the initial network grew as new services such as dial-in terminal support, remote job submission, remote printing, and file transfer were added; as gateways to the national and international Tymnet, Telenet, and Datapac networks were established, as support for the X.25 and TCP/IP protocols was added; as additional computers such as WSU's MVS system and the UM's electrical engineering's VAX running UNIX were attached; and as new universities became Merit members.

Merit's involvement in national networking activities started in the mid-1980s with connections to the national supercomputing centers and work on the 56K bps National Science Foundation Network (NSFNET), the forerunner of today's Internet. From 1987 until April 1995, Merit re-engineered and managed the NSFNET backbone service.[3]

MichNet, Merit's regional network in Michigan was attached to NSFNET and in the early 1990s Merit began extending "the Internet" throughout Michigan, offering both direct connect and dial-in services, and upgrading the state-wide network from 56 Kbps to 1.5 Mbps, and on to 45, 155, 622 Mbps, and eventually 1 and 10 gigabits/sec. In 2003 Merit began its transition to a facilities based network, using fiber optic facilities that it shares with its members, that it purchases or leases under long term agreements, or that it builds.

The Michigan Educational Research Information Triad (MERIT) was formed in the fall of 1966 by Michigan State University (MSU), University of Michigan (U-M), and Wayne State University (WSU).[2] More often known as the Merit Computer Network or simply Merit, it was created to design and implement a computer network connecting the mainframe computers at the universities.

In the fall of 1969, after funding for the initial development of the network had been secured, Bertram Herzog was named director for MERIT.[4][5] Eric Aupperle was hired as senior engineer, and was charged with finding hardware to make the network operational.[6] The National Science Foundation (NSF) and the State of Michigan provided the initial funding for the network. 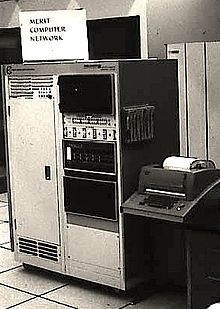 Merit PDP-11 based Primary Communications Processor (PCP) at the University of Michigan, c. 1975

In June 1970, the Applied Dynamics Division of Reliance Electric in Saline, Michigan was contracted to build three Communication Computers or CCs.[2] Each would consist of a Digital Equipment Corporation (DEC) PDP-11 computer, dataphone interfaces, and interfaces that would attach them directly to the mainframe computers. The cost was to be slightly less than the $300,000 ($1,696,800, adjusted for inflation) originally budgeted. Merit staff wrote the software that ran on the CCs, while staff at each of the universities wrote the mainframe software to interface to the CCs.

The first completed connection linked the IBM S/360-67 mainframe computers running the Michigan Terminal System at WSU and U-M, and was publicly demonstrated on December 14, 1971.[7] The MSU node was completed in October 1972, adding a CDC 6500 mainframe running Scope/Hustler.[8] The network was officially dedicated on May 15, 1973.[9]

In 1974, Herzog[10] returned to teaching in the University of Michigan's Industrial Engineering Department, and Aupperle was appointed as director.

Use of the all uppercase name "MERIT" was abandoned in favor of the mixed case "Merit".[2]

Merit interconnected with Telenet (later SprintNet) in 1976 to give Merit users dial-in access from locations around the United States.[2] Dial-in access within the U.S. and internationally was further expanded via Merit's interconnections to Tymnet, ADP's Autonet, and later still the IBM Global Network as well as Merit's own expanding network of dial-in sites in Michigan, New York City, and Washington, D.C.

In 1978, Western Michigan University (WMU) became the fourth member of Merit (prompting a name change, as the acronym Merit no longer made sense as the group was no longer a triad).

To expand the network, the Merit staff developed new hardware interfaces for the Digital PDP-11 based on printed circuit technology. The new system became known as the Primary Communications Processor (PCP), with the earliest PCPs connecting a PDP-10 located at WMU and a DEC VAX running UNIX at U-M's Electrical Engineering department.[2]

A second hardware technology initiative in 1983 produced the smaller Secondary Communication Processors (SCP) based on DEC LSI-11 processors. The first SCP was installed at the Michigan Union in Ann Arbor, creating UMnet, which extended Merit's network connectivity deeply into the U-M campus.[2]

In 1983 Merit's PCP and SCP software was enhanced to support TCP/IP[12] and Merit interconnected with the ARPANET.[13]

In 1986 Merit engineered and operated leased lines and satellite links that allowed the University of Michigan to access the supercomputing facilities at Pittsburgh, San Diego, and NCAR.[13]

The NSFNET project caused substantial growth at Merit, nearly tripling the staff and leading to the establishment of a new 24-hour Network Operations Center at the U-M Computer Center.[13]

In September 1990 in anticipation of the NSFNET T3 upgrade and the approaching end of the 5-year NSFNET cooperative agreement, Merit, IBM, and MCI formed Advanced Network and Services (ANS), a new non-profit corporation with a more broadly based Board of Directors than the Michigan based Merit Network.[15] Under its cooperative agreement with NSF, Merit remained ultimately responsible for the operation of NSFNET, but subcontracted much of the engineering and operations work to ANS.

In 1991 the NSFNET backbone service was expanded to additional sites and upgraded to a more robust 45 Mbps (T3) based network.[3] The new T3 backbone was named ANSNet and provided the physical infrastructure used by Merit to deliver the NSFNET Backbone Service.

On April 30, 1995 the NSFNET project came to an end, when the NSFNET backbone service was decommissioned and replaced by a new Internet architecture with commercial ISPs interconnected at Network Access Points provided by multiple providers across the country.[3]

In 1990, Merit's board of directors formally changed the organization's name to Merit Network, Inc., and created the name MichNet to refer to Merit's statewide network. The board also approved a staff proposal to allow organizations other than publicly supported universities, referred to as affiliates, to be served by MichNet without prior board approval.[13]

In 1993 Merit started what would become an eight year phase out of its aging PCP and SCP technology. By 1998 the only PCPs still in service were supporting Wayne State University's MTS mainframe host. During their remarkably long twenty-year life cycle the number of PCPs and SCPs in service reached a high of roughly 290 in 1991, supporting a total of about 13,000 asynchronous ports and numerous LAN and WAN gateways.[13] 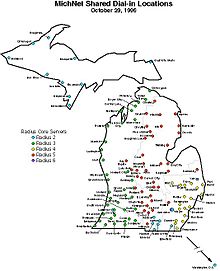 During 1994 an expanded K-12 outreach program at Merit helped lead the formation of six regional K-12 groups known as Hubs. The Hubs and Merit applied for and were awarded funding from the Ratepayer fund, which as part of a settlement of an earlier Ameritech of Michigan ratepayer overcharge, had been established by Michigan Public Service Commission to further the K-12 community’s network connectivity.[17]

Merit was involved in a number of projects in cooperation with organizations throughout Michigan, including:

Transition to the commercial Internet, Internet2 and the vBNS: 1994 to 2005

In 1994, as the NSFNET project was drawing to a close, Merit organized the meetings for the North American Network Operators' Group (NANOG). NANOG evolved from the NSFNET "Regional-Techs" meetings, where technical staff from the regional networks met to discuss operational issues of common concern with each other and with the Merit engineering staff. At the February 1994 regional techs meeting in San Diego, the group revised its charter[22] to include a broader base of network service providers, and subsequently adopted NANOG as its new name.

In 1996 Merit became an affiliate member of Internet2, in 1997 established its first connection to the NSF very high-speed Backbone Network Service (vBNS), and in February 1999 began serving as Michigan's GigaPOP for Internet2 service.[25]

Following the NSFNET project Merit lead a number of activities with a national or international scope, including:

Creating a facilities based network, adding new services: 2003 to the present

In December 2006 Merit and OSTN partner to provide IPTV to Michigan institutions.[39] OSTN is a global television network devoted to student-produced programming.

During the 1970s, 1980s, and 1990s Merit operated what is known as a "value-added network" where individual data circuits were leased on a relatively short term basis (one to three or sometimes five years) from traditional telecommunications providers such as Ameritech, GTE, Sprint, and MCI and assembled into a larger network by adding routers and other equipment. This worked well for many years, but as data rates continued to increase from kilobits, to megabits, to gigabits the cost of leasing the higher speed data circuits became significant. As a result, the alternative of building its network using "dark fiber" that Merit owned or leased on a relatively longer term basis (10, 20, or more years) under what are known as "Indefeasible Rights of Use" (IRU) as well as using or sharing fiber that is owned by its members became attractive.

In July 2008, Merit began upgrading its core backbone network to 10 gigabits and installing five new Juniper MX480 routers. This upgrade was completed in May 2009 with seven backbone nodes in Grand Rapids, East Lansing, Detroit, Ann Arbor, Kalamazoo, and Chicago (2) all operating at 10 Gbps.[52] Also during May 2009 Merit replaced its four 1 Gbps links to the commodity Internet with two 10 Gbps links over diverse paths to two different Teir 1 providers.[53] And in October 2009 the links from Ann Arbor to Jackson and from Jackson and East Lansing were upgraded to 10 Gbps.[54]

In January 2010 Merit and its partners, ACD.net; LYNX Network Group, LLC; and TC3Net; learned that their REACH-3MC (Rural, Education, Anchor, Community and Healthcare - Michigan Middle Mile Collaborative) proposal had been awarded ~$33.3M in grants and loans from the Broadband Technology Opportunities Program (BTOP), part of the federal stimulus package. REACH-3MC will build a 1,017-mile optical fiber extension into rural and underserved communities in 32 counties in Michigan's lower peninsula.[55]

In August 2010 Merit and its REACH-3MC partners were selected to receive $69.6M in a second round of federal stimulus funding to build an additional 1,270 miles of optical fiber in the northern lower peninsula and upper peninsula of Michigan and extending into Wisconsin.[56]

At NANOG's 50th meeting in Atlanta in October 2010, members of the NANOG community supported a charter amendment to transition the hosting of NANOG following the February 2011 NANOG meeting to NewNOG, a newly formed non-profit.[57]