Mandalay Bay Resort and Casino is a 44-story luxury hotel casino on the Las Vegas Strip in Paradise, Nevada. It is owned by MGM Resorts International. Five floors (floors 35–39) of the main hotel building are occupied by the five-star and AAA Five-Diamond Four Seasons Hotel Las Vegas.[2] The top 3 floors (numbered as floors 60-62) are penthouses, with a penthouse lounge on level 62 for guests staying in the penthouses. It is connected by the free Mandalay Bay Tram to its sister properties, Excalibur and Luxor.

On December 31, 1996, the Hacienda was imploded to make way for Mandalay Bay.

The working title for the $950 million resort and casino was "Project Paradise", officially replaced with Mandalay Bay in 1998.

During construction engineers discovered vertical movements and particularly differential movements ('dishing') between the tower core and the wings. The tower core was sinking at a rate of 1⁄2 to 3⁄4 inch (13 to 19 mm) per week and the wings were sinking at a slower rate causing differential distortion between the column bays. If these movements were not stopped structural damage would occur. Construction was halted while a solution was developed and implemented. The solution proved to be the installation of micro-piles (formerly marketed as 'Pin Piles') filled with grout 200 feet (61 m) deep below the structure each capped with a hydraulic jack to stabilize the structure at the desired vertical height to carry the weight.[3] Since then, there have not been any reports of this problem recurring.

The gold coloring of the hotel is a result of gold leaf used on the windows.

The resort opened on March 2, 1999 with actors Dan Aykroyd, James Belushi, and John Goodman headlining a parade of Harley-Davidson motorcycles through Mandalay Bay's front doors to celebrate the grand opening.

The convention center was added in January 2003. When it opened, it was ranked as the fifth largest in the United States. It also offered the largest unobstructed ballroom in the country, at 100,000 square feet (9,300 m2).

Mandalay Bay is connected to Luxor by both a monorail and shopping mall called Mandalay Place which also features restaurants. 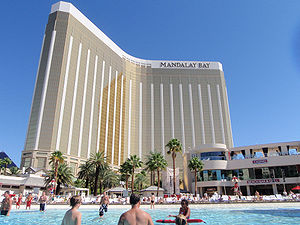 Mamma Mia! was a long-running stage production at Mandalay Bay which closed in early January 2009. The show was replaced with Disney's The Lion King, which opened on 15 May 2009. Its run will end in 2011 to make way for Michael Jackson: The Immortal World Tour, a Cirque du Soleil show. The show will open at Mandalay in 2013 after a world tour.

Mandalay Bay features the 11 acres (4.5 ha) Mandalay Beach with three heated pools, a wave pool with connecting pool for small children,and a lazy river that features a small waterfall. The wave pool features 1.6 million gallons of water and waves in 90-second intervals with heights ranging anywhere from two to four feet. Because of this, it has a strict 48" height requirement. The European-style pool called Moorea, features its own private bar as well as the allowance of female guests to bathe topless. Because of this, Moorea is separated from the rest of the pool by smoked glass windows and has an over-21 requirement. There are also two restaurants at the Beach. The pool area is considered among the best in Greater Las Vegas, winning the 2006 Las Vegas Review Journal's Reader's "Best Pool of Las Vegas" award for the 7th year in a row.[4] One pool remains open throughout the winter months.

In keeping with the resort's tropical theme, it features a saltwater aquarium, the Shark Reef Aquarium, which contains the third largest tank in North America. Shark Reef Aquarium contains numerous other exhibits, including two tunnel-shaped, walk-through aquarium. Another popular attraction is the House of Blues, a venue for live music and a restaurant, with a capacity of approximately 1,800. On the top floor of the hotel is the House of Blues Foundation Room, featuring a dining room, private dining rooms, and a balcony looking down the Las Vegas Strip.

The resort has offered several nightclubs during its existence, but as of 2009 only RumJungle (which operates as a restaurant in the early evening) remains. (RumJungle has since closed.)

There are 24 restaurants and cafés at the resort.[5] Michael Mina, Alain Ducasse, Rick Moonen, Charlie Palmer, Hubert Keller, Wolfgang Puck, Mary Sue Milliken and Susan Feniger are all associated with restaurants on the property.

Since 2008, the Mandalay Bay Resort & Casino has played host to the Las Vegas stop of the Barrett-Jackson Collector Car Auctions.