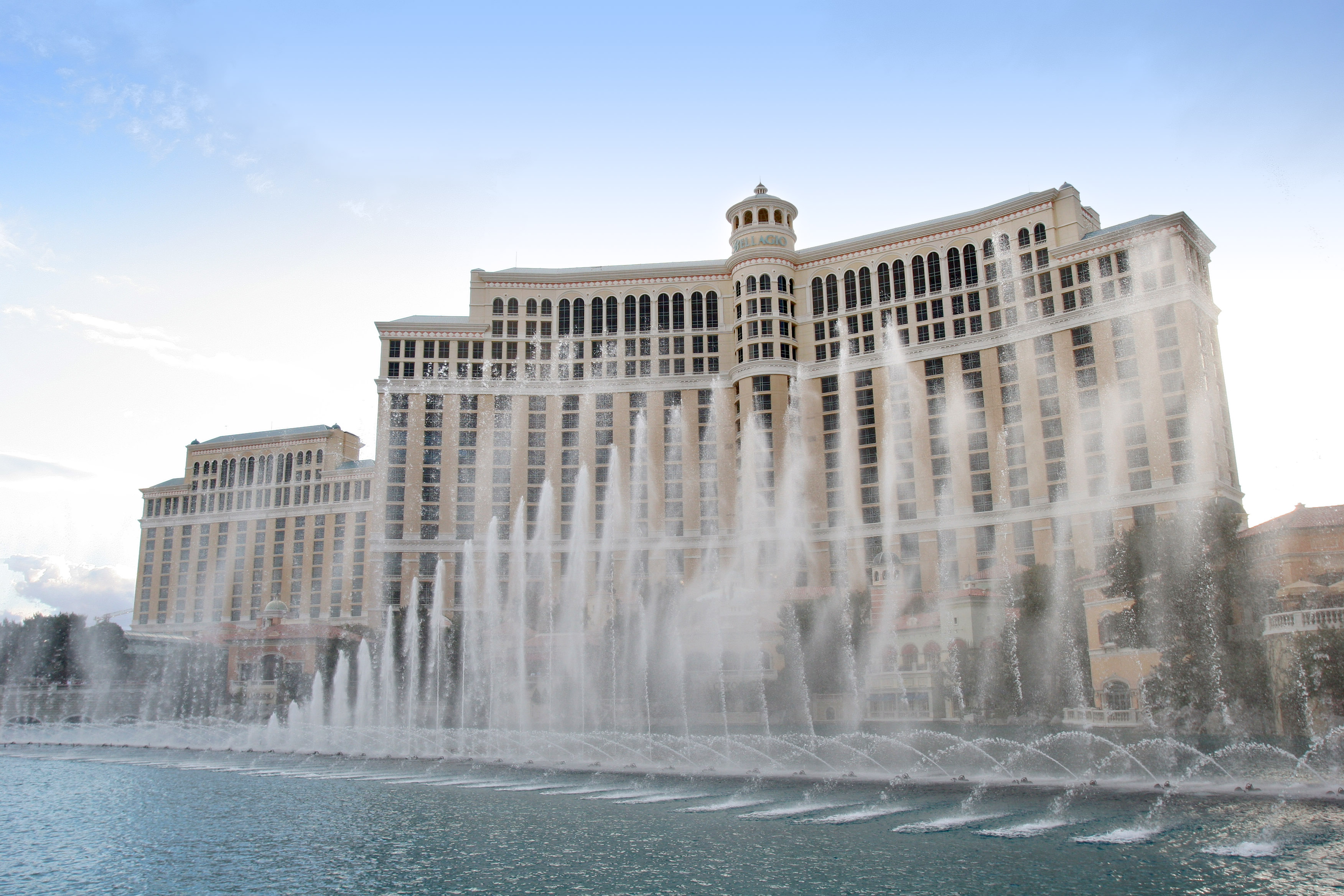 
Bellagio is an AAA Five-Diamond, Mobil Four-Starred rated luxury and located on the in the Paradise area of unincorporated Clark County, , USA. It is owned by and was built on the site of demolished Dunes hotel and casino. Inspired by the resort of in , Bellagio is famed for its elegance. One of its most notable features is an convert|8|acre|m2|sing=on artificial lake between the building and the Strip, which houses the Fountains of Bellagio, a large dancing water fountain synchronized to music.

Bellagio was conceived by Steve Wynn and built by his company, , Inc. following the purchase and demolition of the legendary Dunes hotel and casino in 1993. Bellagio was designed by and . Bellagio had an original construction cost of US$1.6 billion.

The Bellagio employs approximately 10,000 people. In the fall of 2006, the casino floor was remodeled and new uniforms were issued, changing the original color scheme to a more contemporary blue and fire truck red two tone blazers.

Inside Bellagio, 's "Fiori di Como", composed of over 2,000 hand-blown glass flowers, covers convert|2000|sqft|m2|abbr=on of the lobby ceiling. Bellagio is home to 's aquatic production of "O", only the second permanent production show for the world-renowned troupe.

On , , just before 11:00 PM, Bellagio opened. The Bellagio reportedly spent US$88 million on its opening. The VIPs invited to the grand opening were expected to donate to The Foundation Fighting Blindness US$1,000 a person or US$3,500 a couple, which entitled them to an overnight stay at Bellagio's suite rooms.

Opening night's entertainment began with Steve Wynn giving a 40 minute welcome speech and then the opening of the production, "O." Performing in Bellagio lounges that night were New York cabaret and recording artist Michael Feinstein, George Bugatti and John Pizarrelli. When it opened, it was the most expensive hotel ever built, having cost over US$1.6 billion. The Bellagio was also opened on the fifth anniversary of the .

In 2000 it became an MGM Mirage property when Mirage Resorts merged with to create MGM MIRAGE.
* The Bellagio is the only hotel/ resort in the country with two AAA Five Diamond Award restaurants, Le Cirque and Picasso.

*The Bellagio and its fountains are featured in the 2007 film "Lucky You" and the 2008 film "21".
*Bellagio was featured prominently in the film "Ocean's Eleven". The curved staircase that Tess Ocean (played by ) descended was removed during a 2006 remodel to accommodate the entrance pathway from a newly built hotel tower, called The Spa Tower. New shops and restaurants fill the space. The fictitious vault for the three casinos that were robbed (MGM Grand, Mirage, and Bellagio) owned by Terry Benedict (played by ) was located beneath the Bellagio.
*In the 2007 film "", Daniel Ocean (played by ) is talking about The Dunes Hotel (which was situated on the same place before the Bellagio was built) while he is standing in front of the "Fountains of Bellagio" together with Rusty Ryan (played by ).

Many professional poker players prefer to play at the Bellagio poker room, calling it their home base (or more commonly "The Office") due to the high s. Poker professionals refer to the high-limit table as The Big Game. [cite web |first=Chris |last=Gabriel |url=http://pokerworks.com/article-425.html |title=Professional Poker or “The Big Game” |accessdate=2007-11-12 |date= |publisher=Poker Works]

Bellagio has also partnered with the to host several of their tournaments. 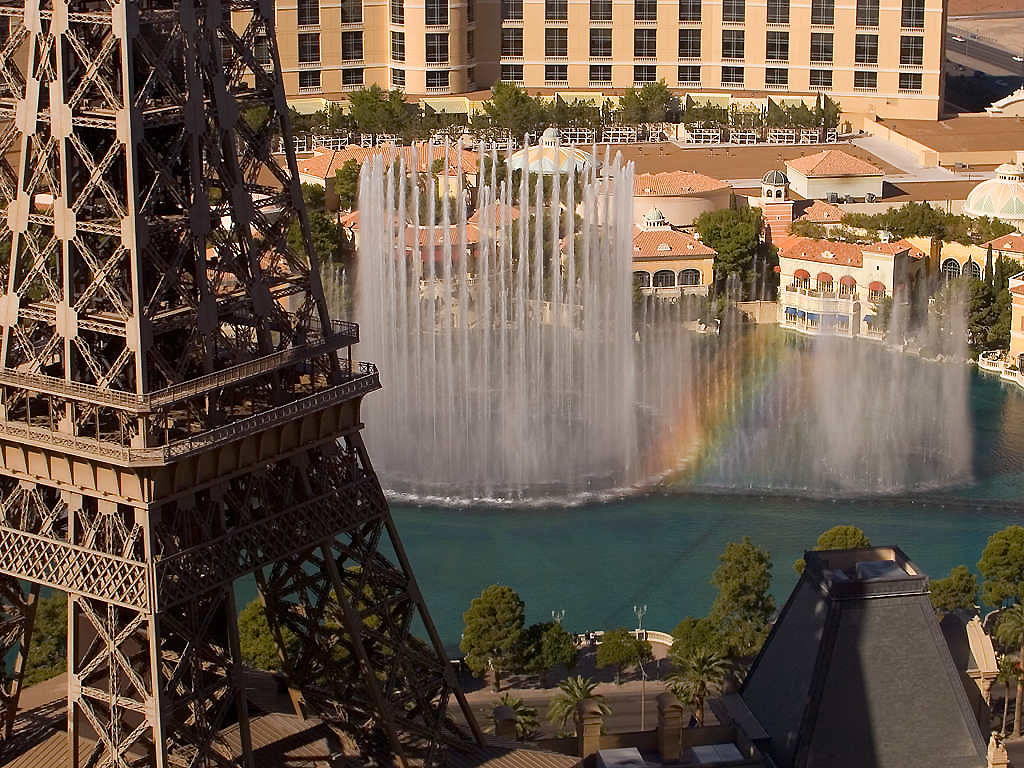 thumb|The_Fountains_of_Bellagio_as_seen_from_the_ hotel, across the strip from the Bellagio.] The "Fountains of Bellagio" is a vast, choreographed water feature with performances set to light and music. (See

The fountain display is choreographed to various pieces of music. Current pieces include: [ [http://www.bellagio.com/pages/attrac_highfountain_pop.asp Bellagio Fountains - Las Vegas ] ]
*"And All That Jazz" (from Chicago)
*"Con Te Partirò (Time to Say Goodbye)" - and
*"" -
*"God Bless The USA" -
*"Handel’s Hallelujah Chorus" -
*"Hey, Big Spender" (from )
*"Hoe-Down" -
*"Luck Be A Lady" (from ) -
*"" -
*"One, Singular Sensation" (from )
*"" -
*"Singin' in the Rain" -
*"" -
*"" -
*"" -
*"" -
*"" - The Fountains are set in a nine-acre man-made lake. Contrary to a common urban myth that the lake is filled with treated from the hotel, it is actually serviced by a fresh water well that was drilled decades prior to irrigate a golf course which previously utilized the site. In fact, the fountains use less water at present than under its prior golf course use. [According to J. Cruz, the Director of Energy and Environmental Services for MGM Mirage from http://www.kued.org/productions/desertwars/cruz_jamie.php] They incorporate a network of underwater pipes with over 1,200 nozzles that makes it possible to stage fountain displays coordinated with over 4,500 lights. It is estimated that the fountains cost US$50 million to build.

Three types of nozzles are used for the various effects:
*Oarsmen® - Jets with a full range of spherical motion
*Shooters® - Shoot water upwards
*Super Shooters® - Send a water blast as high as convert|250|ft|m|abbr=on in the air.

The Fountains were created by WET (aka WET Design), a design firm that specializes in inventive fountains and architectural water features. [ [http://www.wetdesign.com/client/bellagio/ WET Design: Water Fountain and Water Features development for Achitecture, Urbanism, and Landscape ] ] Following the success that WET had with the Fountains, Steve Wynn asked them to improve and modify the volcano attraction at sister casino .

The hotel also contains a "Conservatory and Botanical Gardens". The displays are changed out five times a year and reflect the current season (winter, Chinese New Year, spring, summer, and fall).