Ghosts'n Goblins, known as Makaimura (魔界村?, lit. "Hell Village") in Japan, is a run and gun platformer video game series created by Tokuro Fujiwara and developed by Capcom. The first entry in the series was Ghosts'n Goblins, released as an arcade title on September 19, 1985. The series has subsequently been released on and ported to a variety of game consoles and mobile platforms and spawned several sequels and spin-offs.

The series as a whole has sold over 4.4 million units and stands as the 8th best selling Capcom game franchise.[1] It has gained a reputation amongst gamers for its high level of difficulty.[2][3][4][5]

The main series consists of run and gun platformers with players controlling a knight named Arthur who must battle through hordes of the undead in order to rescue the kidnapped princess Prin-Prin (also known as Guinevere depending on the game/translation) from the demon king Astaroth. Arthur's health and magic level is represented by the armor he wears, with Arthur capable of finding better armor and various weapons in treasure chests hidden throughout the game stages. Once losing his armor Arthur is left only wearing his boxers (an image which has become iconic for the series).[2] In most of the main series, once completing the game the player is forced to re-play the game's stages at a harder difficulty level in order to receive the game's "true" ending. The series has gained a reputation amongst gamers for its high level of difficulty.[2]

The Gargoyle's Quest series is a group of side scrolling adventure games with mild RPG elements. Players control the character of Firebrand, a character who appears as an enemy in the main series.

Capcom briefly licensed the game engine to Dynamix's Sid & Al's Incredible Toons in order to create a puzzle game series based in the Ghosts'n Goblins universe.

Maximo is a 3D hack and slash platformer series developed by Capcom for the PlayStation 2. The games are based on the Ghosts'n Goblins universe and feature original character designs by Japanese illustrator Susumu Matsushita.

Appearances in other games 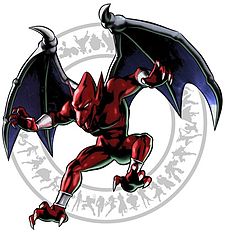 Firebrand as he appears in Ultimate Marvel vs. Capcom 3. 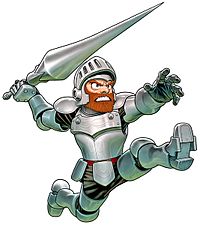 Arthur as he appears in Ultimate Ghosts'n Goblins. Illustrated by Shoei Okano and Shinkiro

The Ghosts'n Goblins franchise was created by Tokuro Fujiwara (also known for producing games in the Mega Man franchise) and is produced by Capcom. Toshio Arima served as lead programmer and Ayako Mori composed the score for the original arcade release in 1985.

The original score for the initial arcade release of Ghosts'n Goblins was composed by Ayako Mori. The music developed for the first game level, entitled "Graveyard, Forest & Ice Palace," has since become recognized as the official theme for the franchise, appearing in a re-mixed form in every entry of the main series as well as making cameo appearances in other Capcom games such as Mega Man 7 and Ultimate Marvel vs. Capcom 3. Tamayo Kawamoto composed the score for Ghouls'n Ghosts, the next entry in the series, followed by Mari Yamaguchi for Super Ghouls'n Ghosts (with Tomohiro Masuda and Nobuhiko Isa handling the GBA re-release), and Masaya Tsunemoto and Kazuhiro Kotani for Ultimate Ghosts'n Goblins. The score for the Gargoyle's Quest spin-off series was composed primarily by Yuki Iwai (with Norihiko Togashi handling the Game Boy re-release of Gargoyle's Quest II).[6]

To commemorate the 20th anniversary of the franchise, Capcom released the Makaimura Ongakutaizen in Japan on December 28, 2005. This 7 disc boxed set featured over 350 tracks and was a complete soundtrack for the series to date featuring the complete scores of not only every entry of the Ghosts'n Goblins and Gargoyle's Quest series, but also of every PC and home console port of each game therein. This collection quickly sold out and was praised by various video game music review sites. In reference to the series' soundtrack as a whole, one reviewer noted:

Though selling for around $100 upon its release, the collection was highly sought out by fans and continues to fetch a high price on Internet auction sites such as eBay.

Capcom released a soundtrack for Ultimate Ghosts'n Goblins on September 30, 2006.

The Ghosts'n Goblins franchise stands at Capcom's 8th best selling game franchise, having sold over 4.4 million units.[1] It is generally well regarded by critics, and somewhat notorious for its traditional high level of difficulty.[2][3][4][5] Additionally, the franchise frequently makes cameo appearances—the character of Arthur in particular—in other Capcom titles, the latest of which being Ultimate Marvel vs. Capcom 3.

The main series starring Sir Arthur and Princess Prin-Prin was initially released as an arcade title in 1985 and subsequently re-released and ported to a variety of home computer consoles. It continues as an active intellectual property for Capcom with its latest release in 2010 on Apple's iOS. The NES release of Ghosts'n Goblins was rated as the 54th best NES game of all time by IGN[2] and the 124th best game on a Nintendo console by Nintendo Power.[8] The game is considered by GameTrailers to be the world's second most difficult game ever made.[5] As of 2008, the original Ghosts'n Goblins is Capcom's 18th best selling title, having sold over 1.6 million units. Similarly, Super Ghouls'n Ghosts is Capcom's 42nd best selling title, having sold over 1 million units.[9]

The main series went on a minor hiatus after the release of Super Ghouls'n Ghosts in 1991. With the exception of the largely overlooked Makaimura for WonderSwan which was released only in Japan, and a rerelease of Super Ghouls'n Ghosts on the Game Boy Advance, the main Ghosts'n Goblins series did not see a major release until Ultimate Ghosts'n Goblins on the Playstation Portable in 2006. The return of the series received mixed to positive reviews. Gamespot noted that the entry would appeal to fans of the original, but that many of the old-school game mechanics including level design and jump mechanics, along with the traditional level of difficulty, may not appeal to the current generation of gamers.[10] These concerns were echoed by such sites as GameDaily and AtomicGamer.[11] Other sites such as IGN[12] and GameCritics[13] praised this adherence to the series' old-school mechanics and traditional level of difficulty, while noting that the new health, armor, and waypoint systems as well as tiered difficulty options went a long way in adjusting the difficulty for new gamers. Ultimate Ghosts'n Goblins was also the first entry in the series to employ 3D graphics, a fact praised by most reviewers: "The 3D graphics enhance the 2D gameplay by giving the world a sense of depth without interfering with the gameplay, and the whole package simply glows with vibrant color and lighting effects."[10]

The Gargoyles Quest spin-off saw a series of releases between 1990 and 1994. The introduction of RPG elements in Gargoyles Quest was praised, however reviewers noted an uneven level of difficulty. Demon's Crest was highly regarded as "one of the finest action titles on SNES, and without a doubt the crowning achievement of the Ghosts'n Goblins line" by critics however went largely unnoticed in terms of sales being labeled a "major flop." Similarly, the Maximo spin-off sub-series was initially well received, though criticized for being difficult and inaccessible. Ghosts to Glory (2001) achieved PlayStation 2 Greatest Hits status in the United States selling more than 400,000 units in North America. IGN ranked the game as the 6th most difficult game on the PlayStation 2.[4] A sequel, Maximo vs. Army of Zin was released in 2003 with better critical reception but faltering sales, ultimately leading to the cancellation of Maximo 3. The future of both the Gargoyles Quest and Maximo spin-off series is unknown.