listen) is a province in the Mekong Delta region of southern Vietnam. The eastern part of the province is largely dominated by Đồng Tháp Mười marsh. Dong Thap is in the Đồng Tháp Mười area and is famous for its lotus.

The province is divided into one city (Cao Lãnh), and two towns (Sa Dec) and (Hong Ngu); in 2010, Sa Dec will be recognized as cities in Dong Thap province, and nine districts:. 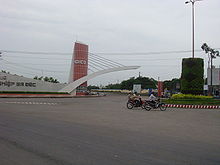 Đồng Tháp has, since December 22, 2008, the largest Buddha statue of the Mekong Delta, built in Quan Âm Pagoda, abbot Venerable Thich Giac An. "The sculpture, 32 meters long and weighing 100 tons, is that of Buddha lying on his side on a lotus petal, his right arm supporting his head and his left arm lying along his body. Buddhist scriptures say the Buddha assumed this position when he attained Nirvana, the release from the cycle of death and rebirth of an enlightened person. Thich Giac An of Quan Âm Pagoda, which from today will be home to the statue, said many Buddhists and locals contributed the 2,000 sacks of cement, five tons of iron and many other necessary materials worth VND1.6 billion (US$94,000) needed to build the statue. Quan Âm Pagoda, founded 200 years ago by a mandarin named Tran Quy Tanh, receives many devotees from across the country for major Buddhist festivals."[1]