The Administrative divisions of the German Democratic Republic were constituted in two different forms during the country's 41-year-long history. The Republic first retained the traditional German division into federated states called Länder, but in 1952 replaced them with arbitrarily-drawn districts called Bezirke. Immediately before German reunification in 1990, the old Länder were restored, but they were not effectively reconstituted until after the GDR had ceased to exist as a separate state. 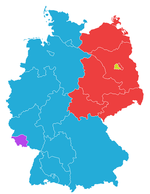 The GDR, coloured red, with the original division into Länder.

Following its collapse in World War II in 1945, Germany was occupied by the United States, Britain, France and the Soviet Union. All four occupation powers, in their respective occupation zones, reorganised political life by restoring the Länder, the constituting parts of federal Germany, though the borders of these entities were adjusted and new entities created to form cohesive territories, avoid petty states and conform with the borders of the zones. The state of Prussia, whose provinces extended to all four zones and covered two thirds of Germany, was dissolved in 1947.

Special conditions were assigned to Berlin, which the four powers divided into four sectors. A united German state government existed in the city until it broke apart in 1948. After 1949, both West Berlin and East Berlin (officially only called Berlin) were in effect incorporated into the Federal Republic of Germany and the German Democratic Republic, respectively, despite not legally being part of these countries.

In the Soviet occupation zone, five Länder were established which roughly corresponded to the preexisting states and provinces. However, all territories east of the Oder-Neisse line were transferred to Polish administration. The five states were:

In 1949, the Soviet occupation zone was transformed into the German Democratic Republic. The five Länder (and East Berlin, though the latter only with consultative votes) participated in the legislative branch through the Länderkammer (Chamber of States), which was elected by the Landtage (state parliaments). However, the Länder were not constituting entities forming a Federal state (as in West Germany) but rather entities of decentralised administrative entities of a unitary state. 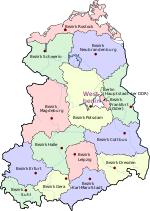 The GDR's centralist tendencies quickly gained speed, especially after the ruling Socialist Unity Party (SED) had adopted the Communist principle of Democratic centralism in 1950. In 1952, the SED announced to establish "socialism in a planned manner". Now, the Länder were considered as no longer corresponding to the requirements of the new tasks of the state. On 23 July 1952, a law combined municipal districts (Kreise) into regional districts (Bezirke), and subsequently, on 25 July 1952, the state governments transferred their administrative tasks to the new districts.

With this law, the Länder were in effect dissolved, though they formally remained in existence, though without any political or administrative function. The Länderkammer also remained in existence and its members were elected in 1954 by combined sessions of the Bezirkstage (district assemblies) in each Land and in 1958 directly by the Bezirkstage. However, on 8 December 1958, the Länderkammer was formally dissolved with no objections being raised.

The 14 new Bezirke were drawn without regard to the borders of the Länder and each named after their capitals,from north to south: Rostock, Neubrandenburg, Schwerin, Potsdam, Frankfurt (Oder), Magdeburg, Cottbus, Halle, Leipzig, Erfurt, Dresden, Karl-Marx-Stadt (named Chemnitz until 1953), Gera and Suhl.

Due to its special status, East Berlin was originally not counted as a Bezirk but it was claimed as the "capital city of the GDR" (though legally, it was not even fully part of the GDR's territory). In 1961, after the construction of the Berlin Wall, East Berlin came to be recognised in GDR administration as the Bezirk Berlin.

The Bezirke (with the exception Berlin, which consisted of a single municipality) were again divided into rural district (Landkreise) and urban districts (Stadtkreise):

Restoration of the Länder 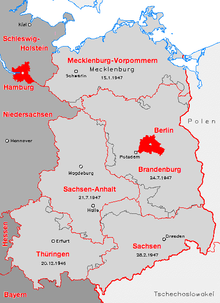 The restored Länder in 1990, with borders in red. The grey borders show the situation of 1952.

Immediately before German reunification on 3 October 1990, the restoration of the old Länder was declared. In theory, it was the Länder which then acceded to the Federal Republic of Germany.

In effect the restored Länder did not constitute themselves until after the reunification: on 14 October 1990, elections to the Landtag (state parliament) were held in Brandenburg, Mecklenburg-Western Pomerania, Saxony, Saxony-Anhalt and Thuringia, initiating the formation of state governments.

Since changes to the boundaries of municipal districts were not reversed, and also due to considerations of expediency, the territorial make-up of the restored Länder differed somewhat from the borders prior to 1952.

Saxony and Saxony-Anhalt initially retained the districts remained as administrative entities (Regierungsbezirke). Saxony-Anhalt abolished them in 2003, while Saxony transformed them into directorates in 2008.